Currency speculators think they have a no-lose situation in Japan. Koichi Hamada urges the Japanese authorities to intervene to stop the Yen from appreciating further despite some clear high costs of doing so

Currency speculators think they have a no-lose situation in Japan. Koichi Hamada urges the Japanese authorities to intervene to stop the Yen from appreciating further despite some clear high costs of doing so
1st Sep 16, 11:07am
by Guest 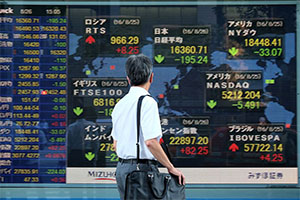 With Japan’s economy struggling to escape its deflationary torpor, the economic-revitalization plan that Prime Minister Shinzo Abe launched in 2012 has come under growing scrutiny.

But Japan’s current travails, which have brought a concomitant decline in Japan’s stock market, stem from the yen’s appreciation – 24% over the last year – against major currencies. “Abenomics” – which included substantial monetary and fiscal expansion – has nothing to do with it.

Since Abenomics was introduced, Japan’s labor market has improved considerably: 1.5 million new jobs have been created, and the unemployment rate has fallen to just over 3%. Moreover, corporate profits have soared, and tax revenues have increased by more than ‎¥20 trillion ($188 billion).

To build on these gains, Japan has promised a large fiscal expansion next month, which some describe as a piecemeal, temporary version of so-called “helicopter drops” (permanent monetization of government debt). But there is concern that it will not be enough, if the yen continues to appreciate.

To be sure, expansionary policies, particularly monetary policies – a pillar of Abenomics – could contribute to currency depreciation. But the US Federal Reserve’s dovish approach to exiting its own quantitative-easing program, together with expansionary policies in other major economies, has weakened their impact on the exchange rate.

More recently, the United Kingdom’s vote to “Brexit” the European Union, together with the introduction of negative rates by multiple central banks, including the Bank of Japan (BOJ), shook markets. Taking advantage of this nervousness, hedge-fund managers and other speculators have increasingly been betting on the yen’s appreciation; indeed, the Chicago Mercantile Exchange shows substantial interest in the yen futures market.

In a flexible exchange-rate system, each country conducts monetary policy independently, based on domestic objectives, and accepts the resulting exchange rate. But when exchange-rate movements become sharp or erratic, monetary authorities have the authority – even the obligation – to intervene to smooth them out.

The Japanese authorities seem to recognise this, in theory. On August 18, officials from the Ministry of Finance (MOF), the Financial Services Agency, and the BOJ gathered to discuss what can be done to stem the yen’s appreciation. After the meeting, Masatsugu Asakawa, the deputy minister of finance for international affairs, declared that the MOF would act swiftly against exchange-rate movements deemed to be speculative.

The announcement was supposed to cause speculators to shake in their boots. Yet markets moved only slightly, within a range of a couple of yen to a dollar. After all, the MOF has made such threats before – for example, just after the introduction of the BOJ’s negative interest-rate policy, and again after the Brexit decision – but never followed through.

Like Aesop’s boy who cried wolf, the MOF has lost credibility, at least when it comes to the threat of intervention in currency markets. So speculators remain convinced that they are making a one-way bet – win big or break even – and continue to push the yen higher.

At this point, the MOF’s words will not be enough to deter speculation. But the MOF remains hesitant to back its tough talk with action, not least because of American disapproval of supposed “currency manipulation.” High-level officials at the US Treasury and Federal Reserve actively try to dissuade advocacy of direct intervention, including by me. An American scholar reacted angrily when I merely mentioned the word, as if it were an obscenity. American officials, for their part, emphasise that if Japan can be accused of manipulating currency markets, the US Congress will not approve the Trans-Pacific Partnership (TPP).

It is possible that the MOF will choose to keep the US on its side, and continue to offer only empty threats to speculators. Or it may simply vacillate until it is too late to take real action. Either approach may well produce the same disastrous result: allowing the yen to appreciate to damaging levels and causing Abenomics to fail.

What the MOF should do is intervene courageously in currency markets to stem the yen’s appreciation. Speculators will learn a tough lesson, and Japan’s economy could get back on track. Though Japan may become a scapegoat for the failure of the TPP, it seems unlikely that the deal would be ratified in any case, given the current political climate in the United States. An alternative would be for the BOJ to purchase foreign securities.

Many hedge-fund managers, along with some economists, claim that the key to saving Japan’s economy from deflation is a more direct helicopter drop, with newly printed cash delivered directly to consumers. Yet these same people are impeding effective macroeconomic policy, by betting on the yen’s appreciation.

Only when the speculators are brought to heel should such a bold – and highly risky – monetary policy even be up for discussion.

Hamada-san should probably start by trying to explain why the yen is appreciating in the first place. Nobody really understands, but there are a few theories out here in conspiracy.com . Those theories are related to Japan still being the world's most effective creditor nation and the risk averse nature of the Japanese.