Yao Yang calls for China's SOE's to be sold to the private sector, with its accumulated savings and new investment needs, to help clean up the country's excessive debt

Yao Yang calls for China's SOE's to be sold to the private sector, with its accumulated savings and new investment needs, to help clean up the country's excessive debt
24th Sep 16, 8:05am
by Guest 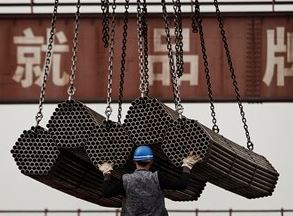 China’s economic slowdown has been the subject of countless debates, discussions, articles, and analyses.

While the proposed remedies vary considerably, there seems to be a broad consensus that the illness is structural.

But while structural problems, from diminishing returns to capital to the rise in protectionism since the global economic crisis, are certainly acting as a drag on growth, another factor has gone largely unnoticed: the business cycle.

For decades, China’s economy sustained double-digit GDP growth, seemingly impervious to business cycles. But it wasn’t immune: in fact, the six-year slowdown China experienced after the 1997 Asian financial crisis was a symptom of precisely such a cycle.

Today, China’s business cycle has led to the accumulation of non-performing loans (NPLs) in the corporate sector, just as it did at the turn of the century. While the rate of NPLs is, according to official data, lower than 2%, many economists estimate that it is actually more like 3-5%. If they are right, NPLs could amount to 6-7% of China’s GDP.

Most of this debt is held by state-owned enterprises (SOEs), which account for just one-third of industrial output, yet receive more than half of the credit dispensed by China’s banks. Though the debt-equity ratio of the industrial sector as a whole has declined over the past 15 years, the SOEs’ has increased since the global financial crisis, to an average of 66%, 15 percentage points higher than that of other kinds of firms.

A looming recession undoubtedly spurred this debt accumulation, possibly aided by former Prime Minister Wen Jiabao’s massive 2009 stimulus package. But it was lax financial discipline that enabled the debt buildup. Banks feel safe lending to SOEs, no matter how indebted, because the government implicitly guarantees the debt. As a result, the SOEs, not surprisingly, have developed a habit of debt-financed growth.

That may not have been a problem when China’s economy was growing, but it represents a serious economic risk today, which is why the government has set deleveraging as one of its major tasks for this year. But execution has been slow, owing partly to China’s failure to enforce its bankruptcy law fully.

The fact that commercial banks are not allowed to hold shares in companies has also impeded deleveraging, as it prohibits the use of direct debt-equity swaps to reduce SOE debt. This should change.

China has employed debt-equity swaps to reduce NPLs in the state-sector before. In 1999, it established four asset-management companies (AMCs) to take on the weakest loans of the four largest state-owned banks, thereby improving those banks’ financial stability. Given China’s high growth rates in 2003-2012, the AMCs made handsome profits from those shares.

Today, too, debt-equity swaps may be the only viable solution to the NPL problem. But the government does not need to rely on government-owned entities to assume the debt. Instead, it should allow private equity funds, which have accumulated large amounts of savings as they await good investment opportunities, to act as AMCs, bidding for the NPLs at a discount.

Such an approach would not just address the NPL problem; by giving the private sector a stake in the SOEs, it would also help to spur performance-enhancing reforms. After all, despite their grim financial performance, many of China’s SOEs have a lot going for them, including state-of-the-art equipment, first-rate technical staff, and competitive products. Their problem is bad governance and poor management – a problem that, as China’s top leaders recognised in 2013, private-sector involvement can help resolve.

Of course, there are some obstacles to introducing debt-equity swaps between the public and private sectors, beginning with concern about the loss of state assets. Given the severity of SOEs’ debt problem – the National Railway Company alone holds CN¥3 trillion (over $40 billion) in debt – discounts are inevitable when SOE debts are transferred to private AMCs. This could cause some to assert that the private firms are realising unjust gains.

In order to overcome this obstacle, China should engage in local experimentation – a tried-and-tested approach that has long guided the country’s reform efforts – beginning in the regions where the SOE debt problem is the most acute. The resulting revitalisation of SOEs would also help quell any doubts about debt-equity swaps with the private sector.

Another obstacle is the fear that, by allowing SOEs, yet again, to escape market discipline, debt-equity swaps would set a dangerous precedent. But the improvements to corporate governance that would follow from the introduction of private shareholders would reduce substantially the likelihood that SOEs would continue to abuse the financial system. Moreover, their NPLs are essentially sunk costs; debt-equity swaps are pretty much the only way to claw back anything at all.

Yao Yang is Director of the China Center for Economic Research and Dean at the National School of Development at Peking University. . Copyright: Project Syndicate, 2016, published here with permission.

The potential for corruption in this type of enterprises should not be ignored; it's a serious risk not being considered! Especially in China. Events derived from these alliances are the kind that can wreck economic havoc worldwide.

Yes I sense another financial crash coming: For decades, China’s economy sustained double-digit GDP growth, seemingly impervious to business cycles. But it wasn’t immune: in fact, the six-year slowdown China experienced after the 1997 Asian financial crisis was a symptom of precisely such a cycle.

I'll bet the governing regime are terrified of what's been created, and will try anything to prop it up, no matter how desperate and insane, because when it blows, they're gone. Bloody revolution time. And who knows what'll replace them.

Yes you're right Kakapo the desprate measure have already stated:-

quote from article: China is in the midst of a massive corruption crackdown and has stepped up efforts to find fugitives it says are hiding stolen assets abroad. The lawsuit comes amid a debate about the role foreign money, particularly from China, has played in Vancouver's property boom.

Isn't convenient that the Chinese banks and Government turned a blind eye to all the huge overseas property purchases in the height of the Vancouver housing market and now that it's all crashing, their now cracking down to seize land and property assets in Canada. Just wait until they start gathering up properties over here!

This is the ideal fox-trap. Nice open records, single system, easy to match up with personal ID, If the Chinese government says 'jump' our government will ask 'how high'. Likely to be a lot of students who bought on behalf of family who'll be thrown under the bus because their name's on the title.

I hope it all crashes. For their sake and ours.

Scary
What is happening now is a disaster so that is bad , but now any real major crash will be total , Great Depression , WW3 and new money! Hope someone has our 6

This particular country should not be solely blamed as it is xi-no-phobic.

Not to be mentioned in a public forum, such as this.

It appears many countries did not ask questions as to where the money came from, probably just borrowed into existence, like most laundered money., it comes via dishonest practices, like printing which if I did it would be called "counterfeiting: ", a criminal offense if I ever saw such a thing.

Their banks are no different to ours, just some customers quicker on the uptake to get out of the system before Xi -lent leaders and others want their share of the lost property markets and high rise inflated apartments. I think it is called taxation, though some see it as perks of the job.

There does appear to be a mass exodus of money from said populations. Maybe the writing is on the Wall.

A free trade agreement is particularly usury, if the exchange rate suffers. As is the case of late. A race to the bottom, by any race is not actually very forthcoming, but a bit rich, if a currency gets sold short.

So those getting out before the shtf, are probably bankers and their ilk. We in the West are no different, just lax in the way we allow our criminally insane, get away with it....after the GFC.

Now it is compounded into reality,it is of little interest, but a Capital idea and part of the World Wide housing problem, created by those who should have gone to jail, but are now in Politics and protecting their similar interests and housing stance..

Well they had to stuff it somewhere...did they not.?...after stuffing us all up, with the process.