Business confidence ended 2016 on a high, NZIER says, with pricing indicators pointing to an increase in inflation

Business
Business confidence ended 2016 on a high, NZIER says, with pricing indicators pointing to an increase in inflation
17th Jan 17, 10:15am by Guest

The latest NZIER Quarterly Survey of Business Opinion shows business confidence remained high at the end of 2016, with a net 26 percent of businesses expecting an improvement in economic conditions over the coming months. Although there was a modest softening in demand in their own business, activity indicators remain higher than a year ago. This indicates continued solid momentum in the New Zealand economy, which should provide a buffer against the downside risks from unexpected events both here and abroad.

Businesses were particularly buoyant in Southland, with confidence at its highest level since early 2014. The continued recovery in global dairy prices has supported higher business confidence in the rural regions over the past year. Business confidence was also high in Wellington, with little sign the recent earthquakes dented confidence.

Business confidence was high across the sectors, but remains strongest in the building sector. This reflects continued strong demand in construction, although architects’ work in their own office suggests some softening in pipeline growth in residential, commercial and Government construction. There has also been an easing in shortages for both skilled and unskilled labour in the building sector, likely reflecting the effects of the surge in net migration over the past year.

Meanwhile, solid household demand underpinned a rebound in retailer confidence, with retailers looking to invest for expansion. This is despite weakening profitability in an increasingly competitive environment.

Pricing indicators point to a pick-up in inflation 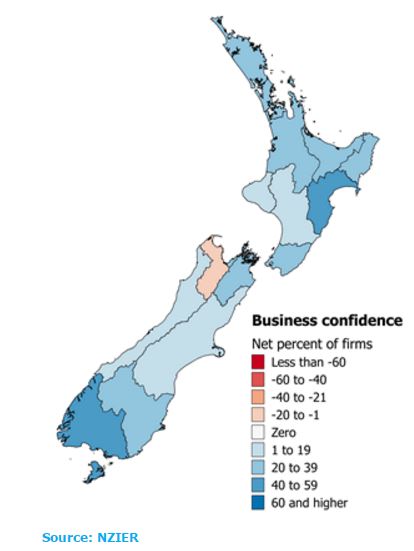 Below is the ANZ economists' take on the QSBO.

· A continuation of the good times looks to be on the cards with business confidence remaining high and experienced activity robust. Capacity constraints remain acute, and there are some signs of inflation stirring, especially for construction and services. Retailing remains a tough gig.

· The outlook for the New Zealand economy is robust with business confidence remaining high. There was a modest softening in experienced demand and future expectations of own activity for the next quarter, consistent with our expectation that economic growth will slow from a gallop (4%) to a canter (3%) in 2017.

· This partly reflects that capacity constraints remain acute, with the CUBO rebounding to 92.7%. Capacity utilisation on the part of builders rebounded, while there was a slight easing for manufacturers and exporters. A record-high percentage of firms (20%) report that capacity is their greatest constraint on expansion at present.

· There are some signs of inflation stirring, with a modest pick-up in pricing indicators across the economy. A net 7% of businesses raised prices over the December quarter, a turnaround from the net 4 percent of businesses that cut prices in the previous quarter. A net 22 percent of businesses expect to increase prices further in the next quarter. The biggest price increase expectations are for manufacturing, construction and service firms. Retailing remains a tough gig with past-quarter selling prices down and future expectations stable.

· The key will be whether planned price increases actually occur. The December quarter saw reality match expectations – a net 7% of business expected to raise prices coming into Q4 and they managed to do this. NZIER expects inflation to gravitate toward 2% in 2017.

· Business confidence remains high across all sectors. highlighting the broad-based nature of the expansion. Regional confidence remains high, especially outside the upper North Island where confidence eased a touch. This highlights the step-up of activity outside of the Auckland halo, driven by internal migration, tourism, construction/infrastructure demand, job opportunities and improvement in dairy sector. Wellington business confidence was high, suggesting only a fleeting impact from the November earthquake on the broader business community.

· Own expected and experienced trading activity eased slightly in December. This easing largely reversed the previous quarter’s gains. Manufacturers experienced output increased in December with robust exports leading the way. This is consistent with a global cyclical upswing for manufactures, commodities and trade. The volumes of services, merchant sales and building industry output also increased in the December quarter. This highlights that under the surface own activity remains fairly robust.

General business confidence eased slightly in December, following the solid rise in September. A net 26% of firms (seasonally adjusted) expect the general business environment to improve in the coming six months, down from 28% in September. Confidence through the second half of 2016 was much higher than seen in the previous two years.

Firms’ assessment of their own activity also dipped lower, largely reversing last quarter’s gains. A net 21% of firms reported stronger activity over the quarter, down from 26% in September. These data provide a useful early read for quarterly GDP growth, and suggest that growth pulled back in the December quarter from the strong 1.1% pace seen in September.

This quarter’s survey showed a marked increase in firms’ pricing intentions, with the number of firms expecting to increase prices in the next three months rising sharply to 22% - the highest level in two years. However, we think this overstates the degree of underlying inflation pressure. The survey showed that price pressures in the construction sector continued to increase, but the other sector driving the headline result was an increase in pricing intentions by services firms. And this is heavily influenced by financial services, with the rise in prices reflecting the rising interest rate environment, rather than a rise in general inflation. Meanwhile, merchants’ pricing intentions remain muted, potentially as the lingering strength in the NZ dollar keeps import inflation contained. So while inflation has passed its trough and is expected to increase gradually over the year head, we expect the rise in inflation back to the RBNZ’s 2% inflation target to be relatively gradual.

· Business confidence remained broadly firm in Q4 and points to continued economic momentum.
· Inflation indicators lifted, but the rise was not broad-based across industries.
· We continue to expect the RBNZ to leave the OCR on hold at 1.75% for the foreseeable future.

Meanwhile, labour market indicators remain tight and inflation indicators moved in the right direction from the RBNZ’s perspective. There are no implications to our OCR view; we continue to expect the RBNZ will leave the OCR on hold at 1.75% for the foreseeable future.

Along with robust levels of confidence, employment and investment intentions also remain firm. These indicators point to continued economic momentum. Meanwhile, labour market indicators remain tight. Difficulties finding labour remained elevated in Q4. On a trend basis, it appears this measure has begun to stabilise (rather than increase). This suggests continued high net migration inflows are stopping the labour market from getting even tighter.

Pricing intentions and reported selling prices all lifted higher (albeit remain relatively low). From the RBNZ’s perspective, this move is in the right direction. However, one note of caution, the lift in Q4 selling prices was not broad-based across industries. The building and services industries saw a strong lift in the net % of firms reporting an increase in selling prices. Indeed, tourism and construction industries are where we expect to see tightening capacity pressures. However, merchants reported a sharp drop in the net % reporting an increase in selling prices. As retailers tend to be mostly importers, this suggests the high NZD is continuing to hold back tradable inflation.

Overall, this dichotomy between industry trends highlights that the downside risks to inflation have not entirely evaporated. Furthermore, there is some way to go before economy-wide inflation pressures are comfortably back within the RBNZ’s inflation target band. This reinforces that the RBNZ is likely to keep the OCR on hold at 1.75% for the foreseeable future (in contrast to market pricing, which implies rate hikes potentially as soon as late this year).