Yu Yongding says China is confronting the macroeconomic challenge of over-capacity deflation. Curbing excessive government and corporate debt which brought a credit rating downgrade is a second-rank problem deflected by a very high savings rate
30th Jun 17, 10:57am
by Guest 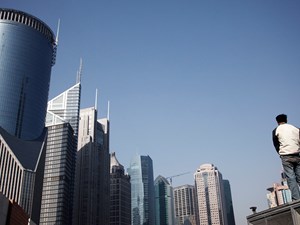 China’s mounting debt problem recently moved into the spotlight when Moody’s downgraded the country’s sovereign rating. But was the downgrade really warranted?

Though China’s overall debt-to-GDP ratio is not an outlier among emerging-market economies, and its levels of household and government debt are moderate, its corporate debt-to-GDP ratio, at 170%, is the highest in the world, twice as large as that of the United States. China’s corporate leverage (debt-to-equity) ratio is also very high, and rising.

A high and rising debt-to-GDP ratio, which goes hand in hand with a high and rising leverage ratio, can lead to financial crisis through three channels. The first is the deterioration of the quality of financial institutions’ assets, and the decline in the price of those assets. With institutions forced by mark-to-market accounting to write off an equal amount of equity, the leverage ratio rises, leading to a further deterioration in asset quality and decline in asset prices.

The second channel is refusal by investors, concerned about the rising leverage ratio, to roll over short-term debt. This causes the money market to seize up, forcing banks and other financial institutions to tighten credit and raise interest rates, thereby further weakening borrowers’ debt-service capacity. Defaults proliferate and the volume of nonperforming loans rises.

The third way a high debt-to-GDP ratio can lead to crisis is by driving banks and nonbank financial institutions, unable to secure sufficient capital, into bankruptcy. In this case, the public could panic and withdraw their cash, fueling a run on deposits that could lead to the collapse of the entire financial system.

But none of these scenarios seems like a real risk for China, at least not in the foreseeable future. China is, after all, a highly frugal country, with gross savings totaling 48% of GDP. As a result, loanable funds are abundant, and funding costs can be kept low. Therefore, China has more scope than other countries to maintain a high debt-to-GDP ratio.

Moreover, because China’s debt consists overwhelmingly of loans by state-owned banks to state-owned enterprises, depositors and investors feel confident (rightly or wrongly) that their assets carry an implicit government guarantee. And not only is the government’s fiscal position relatively strong; it also has $3 trillion in foreign-exchange reserves – a sum that far exceeds China’s overseas debts. China’s government could, if it so chose, bail out banks in trouble, preventing contagious bankruptcies.

Mitigating the debt risk further, China’s capital account remains largely closed, enabling the government to block capital flight and gain sufficient time to deal with unexpected financial events. It helps, too, that the People’s Bank of China stands ready to inject liquidity into the money market whenever necessary.

None of this is to say that China’s high level of corporate debt is not a cause for concern. But it does imply that deleveraging may not be as urgent as many seem to think, especially at a time when China has another, more pressing policy imperative to pursue – one that could be undermined by rapid deleveraging.

For years, China has been in the grips of overcapacity-driven deflation. The producer-price index (PPI) has declined in year-on-year terms for 54 consecutive months, while the annual rise in the consumer-price index (CPI) is hovering around 1.5%. In October 2016, PPI growth turned positive, suggesting that the debt-deflationary spiral may have been broken. But, after a few good months, the sequential growth rate of PPI has turned negative again, suggesting that now is no time to test fate on deflation.

This is all the more true at a time when the government is clamping down on runaway real-estate prices – an effort that is likely to deter investment, thereby weakening economic growth in the next six months. In this context, a wrong move could tip China back into a debt-deflationary spiral – which would pose a more acute threat to China’s economic stability than the risks stemming from the debt-to-GDP ratio.

Still, Moody’s points out, China’s debt-to-GDP ratio is a serious problem. Moreover, to justify its downgrade, it argues that the government’s efforts to maintain robust growth will result in sustained policy stimulus, which will contribute to even higher debt throughout the economy.

To be sure, China does have reason to implement economic stimulus. The overcapacity that, until recently, dominated the Chinese economy was rooted partly in a lack of aggregate demand (and partly in wasteful overinvestment).

In an ideal world, China’s government could respond by stimulating household consumption. But, in the absence of further reforms in areas like social security, growth in consumer spending is bound to be slow. In the meantime, the government must rely on an expansionary fiscal policy to encourage infrastructure investment, even if it means raising the debt-to-GDP ratio.

Such an initiative should also entail improved financing opportunities – including lower borrowing costs – for small and medium-size enterprises. Meanwhile, the rise in the corporate debt-to-GDP ratio could be stemmed by efforts to improve capital efficiency, boost enterprise profitability, narrow the difference between credit flows and credit-financed investment, increase the share of equity finance, and align the real interest rate with the natural interest rate.

There is no doubt that China’s debts – especially its corporate debts – are a serious problem, and must be curbed. But China must balance that imperative with the more urgent need to maintain a growth rate more or less in line with potential, and prevent the economy from being tipped back into a debt-deflationary spiral. So far, China has managed to juggle these two imperatives. One hopes that it has time to address the challenges before it drops a ball.