New Zealand joins Japan, Mexico and Singapore in ratifying the CPTPP with Australia and Canada expected to follow soon bringing the trade deal into effect

Business
New Zealand joins Japan, Mexico and Singapore in ratifying the CPTPP with Australia and Canada expected to follow soon bringing the trade deal into effect 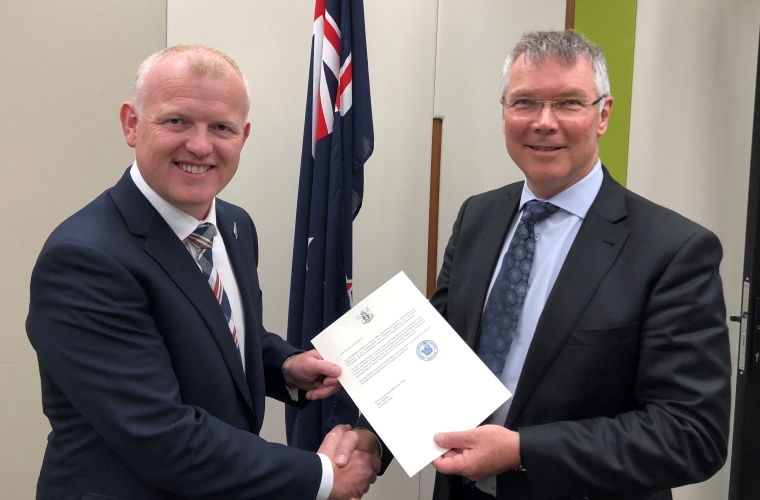 New Zealand has ratified the Comprehensive and Progressive Agreement for Trans‑Pacific Partnership (CPTPP) agreement. Below is a press release from Minister for Trade and Export Growth David Parker.

It’s a big week for New Zealand in trade and investment.

The ban on foreign buyers of existing homes took effect on Monday.

This cleared the way for us to pass the Comprehensive and Progressive Agreement for Trans‑Pacific Partnership (CPTPP) legislation.

This in turn allowed us to ratify the agreement.

New Zealand has today ratified the CPTPP taking to four the number of countries that have formally ratified the Asia-Pacific trade deal.

Minister for Trade and Export Growth David Parker today handed a copy of the notification of ratification to New Zealand’s High Commissioner to Canada Daniel Mellsop. New Zealand is the official depository for the 11 nation agreement.

David Parker is in Ottawa during a six day trade trip to the United States and Canada for talks focussed on the future of the World Trade Organisation (WTO).

“The importance of CPTPP has grown over recent months with the rapid escalation of protectionist measures around the world.”

In recent days he held talks with the top US trade official, Trade Representative Ambassador Robert Lighthizer, his deputy Ambassador Jeffrey Gerrish and other trade experts in Washington DC.

At the White House he met the Director of the National Economic Council Larry Kudlow and had a private meeting with President Donald Trump’s deputy Chief of Staff, New Zealander Chris Liddell.

David Parker said the CPTPP will come into effect 60 days after six countries ratify the deal.

New Zealand joins Japan, Mexico and Singapore that have already ratified. Australia and Canada are expected to join very soon. That means the tariff reductions and increased exports will begin very early in 2019.

“New Zealand’s ratification means that from day one our businesses will be able to take advantage of improved trading conditions and lower tariffs. We have not previously had a trade agreement with Canada, Mexico nor with the world’s third largest economy Japan.

“Economic modelling shows exports, the New Zealand standard of living, and wages, will increase as a consequence, David Parker said.

The CPTPP markets are collectively home to 480 million consumers and make up 13.5 per cent of world GDP.”

“Important changes were made in CPTPP, compared with the original TPP, to deliver on this Government’s bottom lines including, protecting drug agency Pharmac, the Treaty of Waitangi, and the Government’s right to regulate in the public interest,” David Parker said.

·More information on the CPTPP, including the full legal text and a National Interest Analysis, is available at www.mfat.govt.nz/cptpp

I expect better from MFAT's website but to tell us one side of the story on how our access to foreign markets will benefit us. There is hardly any analysis on how we would be affected by foreign companies getting free access to our goods, services and labour markets.

For example, there is a clause in the CPTPP which allows companies to bring executives, managers and specialists into NZ for 3 years or more. There isn't a word about how they would ensure foreign investors do not exploit this provision for reducing labour costs on their NZ operations.

Labour is like the Democrats - Establishment Lite. Continuation as usual, full steam ah.....ooops.

The rule thumb of trade deals for NZ, I guess, is that any deal is better than no deal.

Your point on tariffs savings has a logical flaw. Tariff reduction is not only a cost saving for the exporter but allows them to price their goods more competitively in overseas markets. Lower prices could make our goods more cost-effective to foreign buyers.

These acronyms are getting out of hand. JAMTD (just another meaningless trade deal.) the moment China starts talking about letting US dairy into China watch us grovel and thats on the cards.
If China sneezes we have a trade crisis, far to dependent on them but who isn't. China is far to dependent on the EU and USA, globalisation hasn't delivered for the average Jo, unless you talk cheap toasters and cell phones but ask him how many years he has to work to buy a house.

This is much more interesting
https://www.reuters.com/article/us-usa-nuclear-putin/russia-will-target…

Yeah, I saw that and this the other day;

which came out of this conference;

If you have time, the whole video is pretty interesting.

I once was a head of delegation in an ITU (i.e., UN forum) conference - and someone once wisely told me, "don't poke the bear".

We have to keep spending more and more on Nuclear, as if we stop, then all those ammunition factories, Armies and Associated things that take up a lot of our combined GDP, will be worthless and people like Putin, will end up poor.
So each side has to keep threatening the other, sometimes attacking each other by way of Syria, etc, to keep the Ball-(istic).......production......rolling.

Some people use threats of Oil embargoes, some people use Weapons, some people use Tariff rises, embargoes as well (Trump)...etc....to keep people in line.......It all helps to add fervor to the need to keep the World at war......so someone....who shall be nameless ....at the Top......making a quid, a dollar, a Euro, a Buck... It is a huge cost...out of everyones POCKET....and into someone elses.
Just think what we could have done with the Munny.....end of disease, end of Global War-ming, end of crap houses, end of peasantry......a war to end all wars.......End the arms race.....once and for all.

Sadly, a very good observation. Globalisation as a political ideology is defined as having 'Six Core Claims':

Your point being the final one (not that I am saying you are a globalist, but it is indeed the dominant political ideology of our present times).

Ontario has just introduced a law to roll back wage reforms and freeze the minimum wage at $14/hr for the next two years. Also included is:
* scrapping the two paid sick days legislated by the previous government
*cancelling 10 personal emergency leave days and replaces that with up to three days for personal illness, two for bereavement and three for family responsibilities, all unpaid
*eliminates pay-equity for part-time and casual workers.
Is it really in NZ's interest to enter in to free trade agreements with countries that have provinces that have such draconian working conditions?
https://www.cbc.ca/news/canada/toronto/doug-ford-open-for-business-bill…

Wow - haven't yet read the link, but that is so unlike the Canadian 'way' of my youth. Mother was a Canadian and spent a lot of summers there - heaps of aunts, uncle and cousins - family from Irish Catholic stock - both my Grandfather and one of his sons were the presidents of the Union at an IP mill/plant in their home town.