Good diversity of funding among the top 25 listed companies but most of the next 25 are entirely dependent on banks for debt funding, Chapman Tripp report says

Business
Good diversity of funding among the top 25 listed companies but most of the next 25 are entirely dependent on banks for debt funding, Chapman Tripp report says 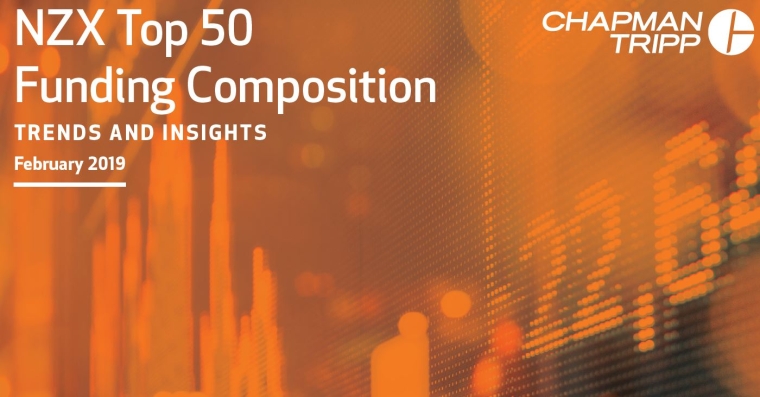 Law firm Chapman Tripp has cast an eye over how the country's major share market listed firms are funded, concluding there's good diversity of funding among the top 25 listed companies but most of the next 25 are entirely dependent on banks for debt funding.

"The difference between the top 25 New Zealand entities listed on the NZX and the second 25 is stark. Most of the top 25 have a range of funding sources including New Zealand/Australian and international banks, listed bonds, US private placements and wholesale programmes. Only seven entities are entirely reliant on bank funding. This contrasts with the second 25, where seven entities have non-bank sources of funding, while the rest are entirely reliant on the banks," Chapman Tripp says in its NZX Top 50 Funding Composition, Trends and Insights report.

The law firm notes that the cost and complexity of accessing capital markets and offshore markets can put smaller issuers off.

"However that is largely a first issuance problem. Subsequent issuances can be considerably cheaper and quicker."

"Capital markets and offshore funding is likely to provide a longer tenor than funding available from New Zealand banks, allowing debt maturities to be spread and helping reduce the risk of any short‑term liquidity crisis," says Chapman Tripp.

"Companies that have already accessed non-bank and offshore funding are better placed to return to those markets if bank funding tightens again in New Zealand and Australia."

"The year to 31 December 2018 was busy for debt capital markets. Thirteen of the top 50, mostly property and energy companies, raised approximately $2.1 billion collectively. Two of these entities were first time listed debt issuers – Property for Industry Limited and Investore."

Of the top 25 listed entities Chapman Tripp points out 18 have listed bonds on issue, 12 have US private placements, and nine have issued wholesale notes or have commercial paper or medium term notes programmes.

Of the next 25, five have issued listed bonds, two have a US private placement, with the rest getting all their debt funding from banks.

Meanwhile just two of the top 50 entities have securitisation programmes.

"More limited availability of bank funding in 2017-18 and a desire for diversity have motivated a number of listed companies to look elsewhere for some of their debt funding. While bank funding continued to be available in 2018, corporates were very conscious of the need for a range of funding sources."

"We predict that in 2019, another two to three of these entities will enter the debt capital markets for the first time. However, most entities still obtain a fairly high proportion of their debt from New Zealand banks meaning they remain reliant on banks. That will continue in the next 12 months given the flexibility of bank funding compared to the other sources and the relative ease of obtaining bank funding in New Zealand. This is unlikely to change while bank funding remains readily available," says Chapman Tripp.

Chapman Tripp notes almost all of the top 50 entities have more than one bank providing debt funding, reflecting the size of the debt facilities these companies have, with what's generally a mix of syndicated, club and bilateral arrangements.

Some 27 of the top 50 listed entities have secured bank debt and 21 have unsecured debt, with one having both secured and unsecured facilities and one having no facilities.

"Only three of the top 10 have given security for their debt. Most entities with listed debt have unsecured facilities. The main exception is the listed property sector where the banks, bondholders, other than subordinated bondholders, and, in some cases, US private placement investors, all share in the security pool," Chapman Tripp says.

"Entities which have granted security to banks must decide whether bondholders will also have the benefit of the security or whether to pay a premium for bondholders to accept subordination. Unsecured facilities are usually only available to borrowers with the highest credit worthiness. The interest rate on an unsecured facility is generally higher than on a secured facility."