Tony Morgan explains why the four largest listed US companies - all tech stocks - set the tone for equity markets, and what you can learn from their investor reports

Investing / opinion
Tony Morgan explains why the four largest listed US companies - all tech stocks - set the tone for equity markets, and what you can learn from their investor reports 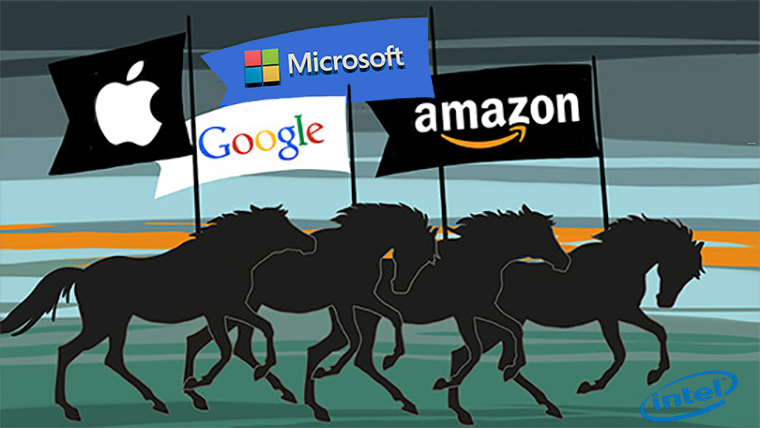 Last week’s results from the four largest American companies, that is Apple, Microsoft, Alphabet (Google), and Amazon (in that order) clearly indicate that the sky is not falling, that there is opportunity out there in an increasingly hostile world of rising interest rates, inflation and cross boarder political conflict, not to mention the Russian invasion of Ukraine.

These trillion dollar market-capitalised behemoths bestow importance because the majority of us interact with them in some way on a day to day basis.

That I do not own any shares in any one of the above companies does not reduce their importance for sensible investors to take notice. What happens on Wall Street at this mighty big end, where global institutions, Index funds and the like (even Mum and Dad investors) store and trade wealth has a huge impact on sentiment.

The sound in this case is positive noise, just what the likes of small investors, like our four Amigos (we will return to these chaps one day) like to hear.

It brightens the day to hear that the big wigs from these stalwarts talk about the positive going forward. How technology is changing the world, the demand ever increasing on a global scale.

Thus far I have only read Microsoft's earnings transcript, seemingly the most important of the whole week, a week of where 100s of companies in America reported their results to stock exchanges. The king of software is in fall stride and aggressively furthering their position of strength in building the global brain via Data Centre’s, where an ever-increasing amount of data is being stored and analysed and then retrieved for use on a user pays basis from customers throughout the world.

You could say that the four horsemen have raised the bar, or in more defensive terms, not let the bar drop. They understand that the marketplace is changing and is complicated. But they are relentless and well placed to get through in any storm intact and in fact stronger out the other end.  That’s why the share prices all rallied last week and was the most positive week for equities all year, and has continued this week.

A kind of floor has been put in the ground. An imaginary line, but tangible nevertheless.

That line was suspect, given the premium valuations these companies command. They command the eyes of almost all investment institutions globally, whereby consistency in earnings is almost dogma - ‘Nail it and we all stay’. As I said in my last column, "belief". There is an enormous respect for those that continue to execute in the good times and not so good.

That is not to say we as private investors can jump for joy and remove our guard or our disciplines towards investing. No, we must be ever vigilant.

As a case in point ... Intel, the world’s biggest semiconductor company for example had an atrocious result and forecast more of the same. This result was all the more disappointing given the fact the technology world is screaming out for hardware to propel our ever-immersive virtualised software world.

What happened with Intel is also important, worthy of discussion at later date.

‘Boring’ Bonds have a role to play

The other consistent message was that of the US Federal Reserve will again be hiking their Fed Funds rate (effectively official cash rate) by another 75 basis points.

This in turn finally flipped the yield curve to be negative, that is what the 2 yr Treasury bond trades versus the 10yr one (in another words the 2yr yield is now higher than the 10 yr).

This curve being now negative (rather than positive) generally defines a period of negative economic growth is forthcoming. And that might be so.

But my take is that those short-term rates need to be going higher to slow the economy further in the next year or two, to get inflation somewhat under control (I could be dreaming).

The same should happen in New Zealand as our Reserve Bank ratchets up the official cash rate. We are ways off getting the yield curve to flip. But the signs are appearing. Long term interest rates are leveling off. I would suggest it is likely that by the end of this year, should the Reserve Bank keep putting the foot to the peddle in increasing that cash rate, then we will end up with a yield curve similar to the US.

The crux of all this interest rate shenanigans, is that hopefully investment markets will stabilise somewhat as inflation comes more under control and those lower long term interest rates give borrowing markets (that is, house mortgage market for instance) a firm ceiling even if short term rates, say 2yrs or less are still relatively high.

Furthermore, we as consumers and or producers will get some relief that pricing of goods and services are more stable.

In such a new environment, even though economic growth may stutter you should see equities in general stabilise. Putting money to work is another story though, something we must dig deeper into in due course.

Whatever happened to FANG.

They're expensive because people want to own great companies (Netflix aside maybe?)

In tough times people cut back on lots of things but you never hear of them throwing out their I Phones.

Apple earnings down, but EPS up, of course when your share price goes down EPS will go up.

I guess when your operating net profit margin is 23+% you can do what you want forecast wise.

China + inflation + supply chains yet to scuttle Apple earnings, or is it another case of extend and pretend?

...when your share price goes down EPS will go up.

I can't see how earnings per share changes when the share price drops?  Do you mean PE ratio goes up?

Okay forgive me for being a contrarian.  I heard someone say once that that every investment is the sum of future cash flows.  With that in mind, and looking at it from an investor point of view… They’re all terrible, even intel’s dividend yield is actually negative when you subtract CPI inflation.  It seems that the only reason I’d own these stocks is for capital gain.  But with the exception of Intel, the p/e ratios are already stretched to the max, and earnings are likely to go down not up as this global depression kicks off in the next few quarters.  Everyone subconsciously thinks the central banks are going to do a U-turn in December, in which case it’s game on again for growth stocks, but what if the central banks stay the course.  These stocks are f*&ked (Maybe not intel?).  Or am I wrong?

Yes, these companies grew to the size they are now because they didn't pay out all their cashflows in dividends. If you can reinvest the majority of your cashflows at a high consistent growth rate, you will see great results. Some of these companies are just cash machines so they don't need to borrow money. They also have such high gross margins which means they are dominant, and their product / services are sticky or have moats. Companies with higher gross margins can also navigate high inflationary periods better than those without.

Good points, very Warren Buffett-ish.  All those companies have great ROIC too.  Is all that rear view mirror stuff though?  Supply chains are breaking down.  Increasing costs and wage demands will compress margins if they're haven't already.  China seems to be using covid as an excuse to decouple itself from global supply chains.  Companies like Intel are spending billions relocating to the USA where wage costs will be higher.  I don’t know - you're probably right.  I suck at stock picking.  I was huming and harring about Restaurant brands.  Maybe that's recession proof following it's recent price decline? and apparently, they send you free KFC vouchers every year - yum.

Intel results aren't around the general economy but they cant produce new style chips. Lost business when Apple bailed. Do a lot of talking but execution not there.

Sorry Tony, old chap. Complacency is a sign of danger. The US inverted yield curve is an air raid siren going off, or think of it as a hurricane warning if you prefer. So is the rising USD, all point to a worldwide scramble to safety.

I followed a link on this site from Andrewj a few years ago to these guys. It has been a great education:

Hedgeye do numbers and process, not narrative, they teach by coaching and practise. If you need a narrative version, try Jim Rickards here:

or the transcript here:

In my simplified version, we have inflation due to the buggering up of the global trading system (Trump tariffs, COVID response, Biden war on oil, Ukraine response), and the world central bank, the Federal Reserve, can't build a better one. It can "reduce demand" though, by buggering up the world economy with high interest rates and mass unemployment, so that reduced demand matches the reduced supply.

So welcome to the future, mass unemployment, "civil unrest", ie low level civil war, warfare as distraction from incompetence, plagues and famine. It's back to the Middle Ages, again. Think 1930s and 1940s, only faster.