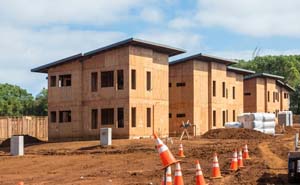 There are fears a fish hook in the law will prevent first home buyers from taking advantage of a Government incentive aimed at getting more people in newly-built homes.

A new grant for first home buyers purchasing newly-built homes will come into effect on April 1.

First home buyers purchasing newly-built homes will be eligible for a grant of $6000 after they’ve been in KiwiSaver for three years, $8000 after four years and $10,000 after five years.

The grant is double that of the one available for first home buyers purchasing existing houses.

Housing Minister Nick Smith says, “The focus of this package is to increase the supply of new housing and to encourage housing companies to build homes in a price range affordable for first home buyers”.

Yet Squirrel Mortgages managing director, John Bolton, sees a glitch in the system.

KiwiSaver will only release the funds on settlement, despite buyers needing the cash to make a deposit when entering into an agreement to purchase the property.

So essentially, the deposit is tied up in KiwiSaver.

Bolton says, “There’s a disconnect between policy and the Government’s intention”.

He says no one’s going to lend you that kind of money unsecured, and if you do get a bank loan, you’re looking at an interest rate of around 16%.

Bolton maintains buyers’ parents will end up stepping in and lending money to their children in the short-term.

He says it’s not a matter of developers changing their conditions to attract first home buyers, as it’s the banks funding developers that require deposits.

“My request for Government would be that buyers can access the grant on going unconditional rather than at settlement”, he says.

Smith’s office has responded to Bolton’s concerns, saying, “The Minister is seeking advice from officials on this”.

First home buyers are only eligible for the grant if their income is below $80,000 for an individual and $120,000 for a couple.

The house being purchased must also be below the regional house price limits, which are going up in April to $550,000 in Auckland, $450,000 in Wellington, Christchurch, Hamilton, Tauranga, Queenstown and a number of other towns, and $350,000 for the rest of the country.

Smith says the grant for newly-built homes is one component of the Government’s new HomeStart package, which will cost an additional $218 million over the next five years.

That and a brand new house doesnt have much room for adding value, and often will lose value as brand new fitting depreciate very fast, and land will be min lot size, 250-350 sq m.
Extra $5k max for new house likely to be gone as soon as the front doors open (like driving a new car off the lot).
FHBs will continue to favour older proerties that they can do up as the craze of 'the block' etc is pretty ingrained.
Nice try though, just means more fuel on fire of the second hand properties

This is not a problem.
Deposits at time of signing the Sales & Puchase agreement are optional and a rort! Deposits are only insisted upon by realestate agents for the sole purpose to guarantee their commission should the agreeement fall through.
And it's not just first home  buyers who face the problem of having no funds for a deposit. I, like a lot of purchasers, sign a S&P agreeement on condition of selling my current house. Who has a free 10K available to fork out in the situation?
The last house I bought, I said "no" to the request for a deposit and the realestate agent feigned offense and suggested I put it on the credit card! OMG! I stuck to my guns and was able to sign the agreement without deposit.
We need to educate first home buyers to refuse the request for a deposit and this problem goes away.
The issue here is, that first home buyers get most of their information about buying a house from  self-serving realestate agents which is always going to be problematic.

" realestate agents for the sole purpose to guarantee their commission should the agreeement fall through."
The real estate agent doesn't guarantee the agreement will go forward.  Their contract is to see the P&S Agreement contract to unconditional status.  They also provide a couple other final services (eg final inspection) after than.  They have completed their job shouldn't they get paid?

And if you can prove that you're good for it (like selling a farm) then you can negotiate.  I pity the seller in your scenairo, doesn't sound like the agent was a good negotiator.   Like they say if they can't negotiate their own fee what use are they to a seller !

" I pity the seller in your scenairo, doesn't sound like the agent was a good negotiator."
or you could give me credit for being a better negotiator?

I have always been under the impression, that if a deposit has been paid, and the sale falls through, the vendor gets to keep the deposit, while the RE agent gets nothing

Only the portion of the deposit that does is not needed for realestate agent commission, goes to the vendor. Hence why RE insist on a deposit.

"If the agreement has become unconditional and the buyer does not complete the purchase, then the vendor can cancel the agreement and keep the deposit subject to the real estate agent's commission"
http://www.conveyit.co.nz/free-property-advice/the-deposit-what-is-its-relevance

"The agent will usually take their commission from this deposit when the agreement becomes unconditional."
http://www.reaa.govt.nz/ForBuyersAndSellers/Pages/Whatsinasaleandpurchaseagreement.aspx