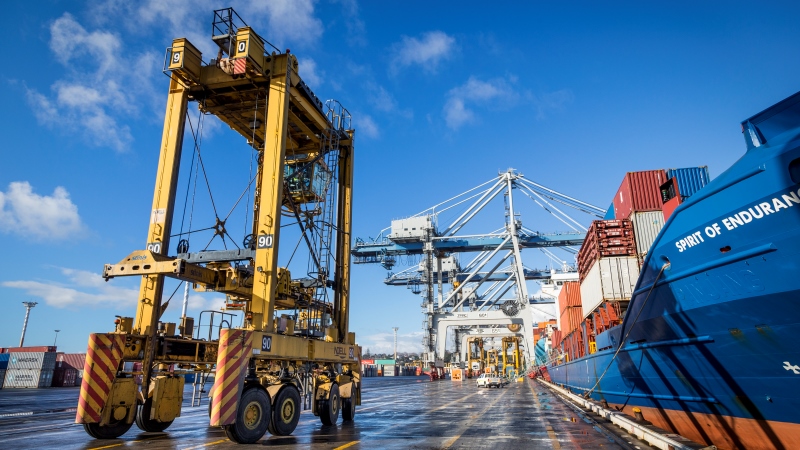 The Ports of Auckland says the Auckland Council can expect a reduced dividend over the next two to three years as it pushes ahead with a major investment programme.

Auckland Council currently has 100% ownership of the port and it received an annual dividend from its shareholding of $51.1 million in the 2017/18 financial year.

But the port company has increased its debt by 30% since last year as part of an investment programme to increase its capacity and returns, despite the fact its long-term future hangs in the balance.

“We expect a reduced dividend stream [to Auckland Council] for the next two to three years, followed by an increased return in years after that as we get benefit from current investments,” Ports of Auckland spokesman Matt Ball says.

And according to the latest Auckland Council Group Performance Overview the port company has taken on more debt to pay for it.

The council report says this has been accompanied by a fall in container volumes due to “reduced terminal capacity during the automation works and the loss of a major contract”. While there has also been a drop in the number of cars being processed by the port due to lower car sales and the impact of new biosecurity measures.

Ball says the report is an accurate reflection of where things are at for the Ports of Auckland.

But he says the project has so far included the purchase of the 33 hectare site in 2016 and the completion of the first customer facility which has now been completed, as well as a new bridge for road access which is expected to be completed this year. He says there are also plans to construct rail sidings and additional customer facilities as required.

When asked about the port’s future in Auckland he refers to the company’s 30 year Master Plan was produced in 2017 and approved by Auckland Council in May last year.

“We’re basing everything we do on that master plan until we’re told otherwise. The plan is designed to fit with the idea of the port eventually moving, but it is also intended to allow us to keep the freight moving until then.”

The latest news on the Ports of Auckland’s capital investments follows a lot of political debate over its future in the City of Sails.

Auckland Mayoral candidate John Tamihere has called for the Ports of Auckland’s business operations to be privatised to help ease the financial burden faced by the city’s ratepayers.

Under his proposal released last month the Super City would still retain ownership of the land the port sits on and the new port owners would have to lease the land back from the council at a “credible commercial rate for up to 25 years”. They would also be expected to develop an agreed exit strategy.

While NZ First MP and Minister for Infrastructure Minister Shane Jones is continuing in his quest to see the Ports of Auckland’s operation’s north to Whangarei. He says connecting Northport to rail and enabling it to service Auckland-bound freight would make a major contribution to the region’s economic development.

Last month Jones released a new report by consultants AECOM New Zealand and Deloitte on the feasibility of upgrading Northland’s rail network to allow it to happen. The business case was produced for the Ministry of Transport and paid for by the Provincial Growth Fund (PGF) and says upgrading the Northland rail network and building a new rail spur from the main line to Northport would cost $1.3 billion.

NZD480mm in debt for a company which is council owned seems incredibly heavy. The question I would ask is why on earth they are taking the dividend at all if this results in paying a ton of interest ? Surely prudent financial management would be to keep the company debt free and keep the company sufficiently capitalised to pursue automation/development where needed.

But, and AC has this in common with all TLA's with lucrative CCO's and dividend streams, every cent of Dividend to the TLA is a cent Off the Rates Required total. Upon which figure Councillors are elected, or booted into the weeds.....whereas no-one looks into the CCO's, and they don't figure electorally, so as long as the Munny keeps flowing In to the TLA, who cares? Prudence? Long-term and inclusive thinking? Pfft - just keep them Divvies a'comin'