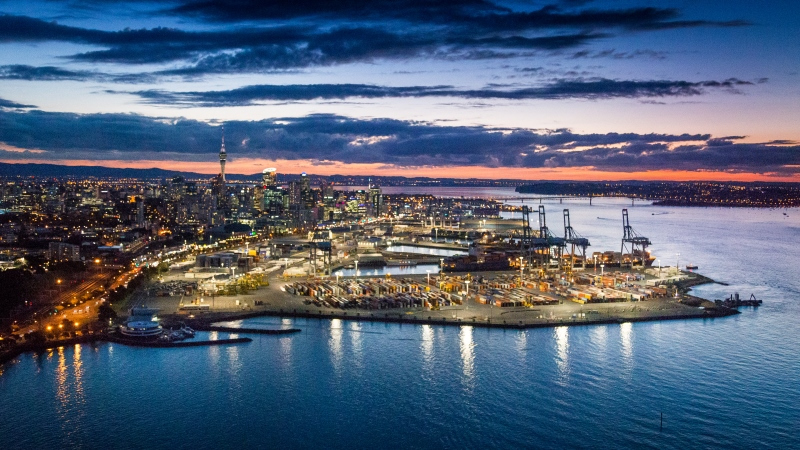 The Ports of Auckland says it still needs to assess the operational impact of a proposal by logistics company PTS to ship cars from the port to Highbrook in South Auckland.

Palmerston North-based PTS specialises in transporting vehicles and is currently building a new storage facility at Sparky Road in Highbrook. It has submitted a proposal to both the Auckland Council and the Ports of Auckland to use barges to transport the cars to its depot, which it hopes to have completed in 2021.

Auckland Mayor Phil Goff says the council wants to see more efficient use of the wharves, including freeing up berth space on the western side of Bledisloe Wharf and Captain Cook Wharf for possible use by cruise ships. And to reduce the impact of transporting vehicles on the downtown area and motorway network.

He is keen to see the PTS Logistics proposal realised and outlined his thoughts on the matter in a letter to the chair of the Ports of Auckland chair Liz Coutts and states:

"The SCI should include a commitment to look at new solutions for handling car imports to remove vehicles from Captain Cook and Bledisloe wharves," he says. "POAL has a statutory obligation to operate as a successful port company, and the Council believes an investigation of the proposal to barge cars to Highbrook is consistent with this imperative given the commercial opportunities it may create."

Ports of Auckland spokesman Matt Ball says most of the work to date has been done by the PTS. But he says the fact the work will have to fit in with the Ports of Auckland’s operations six days a week and will involve the movement of thousands of cars a year means the port will have to agree with the final proposal.

“We’ve already said we support the concept, now we will need to look at the operational impact and what additional infrastructure is needed. Our work will to an extent rely on what PTS comes up with, so I can’t give you a time frame.”

But he says news reports that PTS plans to ship just under quarter of a million cars a year could be problematic. He says there are a number of other companies that transport the imported cars that pass through the port every year.

"The 230,000 figure is based on PTS taking over the whole supply chain and we can't do that because the Commerce Commission would come knocking on our door."

Ball says there would also have to be a lot of dredging work done to allow access to the Highbrook site.

But Goff says he has asked the Ports of Auckland to accelerate its investigation into better ways of clearing imported cars off the waterfront, including the option put forward by PTS. He says it could potentially reduce the large number of truck movements currently involved in transporting cars from the port and improve public access to the waterfront.

“As I announced in August, Ports of Auckland has committed to accelerating work into options to reduce the number of cars on the wharves, including the barge proposal,” Goff says.

“No decision has been made, but the company involved believes that a two-year timeframe to implement the barge proposal is realistic should that option prove to be the best one for Auckland.”

The Ports of Auckland has increased its debt by 30% since last year as part of an investment programme to increase its capacity and returns, despite the fact its long-term future hangs in the balance. It signalled earlier this year that it would be paying a reduced dividend to the Auckland Council. But the latest SCI shows just how much the council’s returns will fall by. The Ports of Auckland Statement of Corporate Intent (SCI) covers the period from July 1, 2019 to June 30, 2022.

That sort of cargo all under the Pakuranga bridge, it can't be more than 10m wide at points heading in to Highbrook, add that on top of recreational use. Dreaming...

I will be declined - the Port is intent of expanding - not reducing its foot print on the Auckland Harbour.