Crown financial statements detail whopping $5.3 billion increase in the value of the national rail freight network to $6.3 billion with valuation done on a public benefit basis rather than a commercial basis

Crown financial statements detail whopping $5.3 billion increase in the value of the national rail freight network to $6.3 billion with valuation done on a public benefit basis rather than a commercial basis 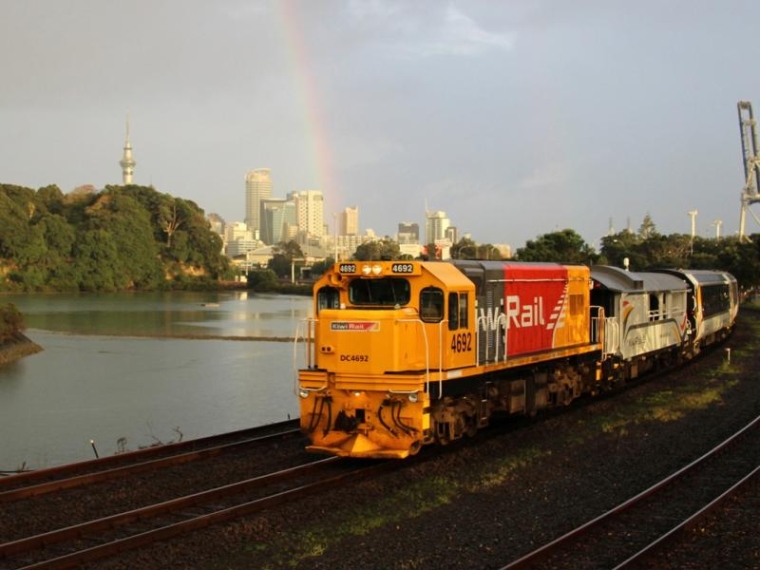 A change in the way the national rail network is valued means the Government has increased its carrying value by a whopping $5.3 billion to $6.3 billion.

This is disclosed in the Crown's June year financial statements released on Tuesday.

"Following a review to consider the context of KiwiRail’s purpose within a multi modal transport system, the underlying assumption of the benefits of rail were reframed as: 'Rail enables access and mobility, transporting people and goods to where they need to go, supporting productivity and business growth, reducing emissions, congestion and road deaths, and strengthening social and cultural connections between communities'. As a consequence, a valuation for the rail freight network that only reflected its cash generating potential was no longer appropriate," Treasury says.

"These financial statements include the valuation of all the rail infrastructure using an Optimised Depreciated Replacement Cost [ODRC] method. To the extent that the assets deliver public benefits and would be replaced, a replacement cost approach is used, depreciated to reflect the extent the assets are through their useful lives. The valuation is ‘optimised’ by reporting components within the network that do not produce benefits, as surplus assets that are measured at their recoverable amount."

"The impact is to increase the value of the rail freight network to $6.3 billion compared to a value of $1.0 billion that would have been reported under the previous basis," says Treasury.

The Crown accounts also show a reversal of KiwiRail’s previous impairment expense of $2.6 billion, resulting from the change in the valuation approach of the rail network from a commercial basis to a public benefit basis.

Treasury notes the rail network comprises around 3,700 kilometres of track, excluding yards and sidings, and is used primarily for freight transport. It is, however, also used by KiwiRail for long distance passenger transport and access is provided to the Greater Wellington Regional Council and Auckland Transport regional authorities for metro passenger services. The rail infrastructure earns revenue from freight and long distance passenger charges. Network access charges are also collected from the two regional authorities for the metro services.

"Since the restructuring of KiwiRail as a profit-oriented entity in 2012, the rail network infrastructure used for freight services, including dual use assets required for freight operations, has been valued at fair value, reflecting the recoverable amount that could be expected to be received from a third party in an orderly transaction. The portion of dual use assets not required for freight operations and metro only assets were reported in these financial statements at an optimised depreciated replacement cost basis, reflecting the community benefits of this investment rather than treating this portion as a cash generating asset at a whole-of-Government level. Those valuation approaches reflected the government purpose in holding the assets," Treasury says.

Treasury notes last year’s financial statements disclosed that the Government had initiated a rail review. This recognised the challenges in making investment decisions, marrying the duality of commercial “for profit” activities aligning a State Owned Enterprise's commercial mandate with other “public benefit” activities that deliver social benefits instead of commercial returns, and integrating short-term funding commitments with investment decisions for long-life assets.

"The findings of the Review of Rail were reported to Ministers in May 2019, who noted that all rail, including freight, contributes to national and regional economic growth and reduces emissions and congestion, reduces road deaths and injuries, facilitates wider social benefits, and provides resilience and connection between communities. The report also noted the necessity of continued commercial disciplines and focus of KiwiRail to support efficiency in asset management, and to drive commercial returns from the provision of freight, property and tourism operations," Treasury says.

Cabinet agreed in principle "to a resilient and reliable rail system to deliver on the outcomes for transport and wider benefits the Government seeks." Budget decisions were made on this basis.

"As a consequence it is no longer appropriate at the whole-of-government level to reflect the rail freight network as a cash generating asset, ie, at its recoverable amount, given the wider reasons for the Crown’s investment in the rail infrastructure. This changed view at a whole-of-government level does not affect the treatment of the assets in the financial statements of KiwiRail itself, as it remains a profit-oriented entity."

Gosh, the Gubmint-to-Citoyen Translation Bureau is having to work hard today:

Just as well interest rates keep tracking down. What would the EVA budget be with this revaluation?

Get's about a bit, that Kiwirail valuation, doesn't it!

- "In June 2003, the Government announced that it would buy back the rail network $1 and purchase a 35% stake in (Tranzrail) for $76 million "
- "In July 2003 the Government announced that it was dropping its bid to buy a 35% stake in Tranz Rail, instead allowing Toll to succeed in its takeover bid. Toll's bid valued Tranz Rail at $231 million."
- "In May 2008 the New Zealand Government agreed to buy the rail and sea transport assets back off Toll NZ Limited for $665 million.The government branded the new company KiwiRail."

Now it's valued at 6.3 billion and I can't see where The Government has spent over $5 billion 'doing it up'?

The railway should never have been sold in the first place, and it was only political expediency that drove the price up in the buyback. Jonkey should know. He received a big commission check as a middleman on the way through.

Now the town planners need to bring in some intensification rules to encourage the use of mass transport around nodes, to make it commercially viable. Emphasis on mass transport rather than public transport, as the public sector are full of incapable yes people by design and are very slow are delivering anything.

Mmmmm, what's on the other side of the ledger that requires such extraordinary method of support?

Operations from a financial control perspective are still viewed as a case basket situation. Can't be trusted with a dollar.

Exactly, and also conveniently defrays the recent ACC write down.

owning an unhindered right of way to all the population centres must have some value,they already have their own fibre optic network but they could install high capacity and lease access like the undersea cables.

nearly all of that is land value, it does make you wonder if they closed it all down and sold all the railway land how much they could get

The land can't be sold . It could be leased.
If you looked at the replacement value of all the Infrastructure , it would be higher than this figure.

Double that revaluation next year juuuust in time for a National led government to onsell it to one of their interns...for a dollar...an honest safe pair of hands kinda deal y'know!

An intern recently arrived from Beijing, perhaps. One who definitely did not lie on his or her immigration forms.

Well done on dragging in racial comments into something that actually has nothing to do with China or the Nats.

If you will take the time to read the comment I replied to you will see it was discussing National.

Also, the comment is not in regard to race (which is irrelevant) but National's obsequiousness to the Communist Party in Beijing.

I don't mind saying that as a former supporter of the blue business shirt brigade I am disgusted in their craven lust for chinese money and no longer support them. They are a corrupt party sleeping with a corrupt totalitarian state and our country is worse for it.

It's worth noting,, in passing, and to some extent to counter the wilder conspiracy theories extant on this 'ere thread, that ODRC stands for Optimised Depreciated Replacement Cost. It is a standard accounting valuation basis where the entity is asset-intensive, those assets are long-lived, and where historic cost is meaningless and mark-to-market irrelevant. It's standard practice for utility companies across the globe, because the depreciation based on a frequently updated ODV should, at least in theory, provide a cash asset for replacement when that happy day arrives.....

ODRV (or derivations thereof) is standard for assets that are natural monopolies without substitute (i.e. Transpower, Lines Companies and Airports) that have a regulated return determined by the value of their underlying asset base.... otherwise they could charge whatever they want and consequently they would also have a very high valuation on a 'normal' 'commercial' basis too.
Rail isn't in that category, it struggles to compete with road infrastructure as a competing substitute.

Even then, the use of ODV for Transpower (a derivation of ODRV) was contentious at the time of electricity deregulation (late '90s).
The decision to go with a derivation of ODRV was seen as the Government cynically choosing a methodology that would most likely avoid a asset write-down/impairment... don't you think it's interesting that the exact opposite outcome has been achieved here by the Government of the day?

It's a joke.
And worse it's a one-off fair value movement that they are being heralded for delivering... even worse again, future spending commitments (some might say 'bribes') are guaranteed to be made ahead of next years' General Election using the distorted $7.5b surplus as justification.

Is Kiwirail able to borrow 6x more now that it is worth 6x as much?

The only value rail has is the land it is on. In UK it costs a mind boggling average of $0.80/km to transport passengers by rail (including passenger fares and govt subsidies). 1st generation piloted electric air taxis entering service in 3 years will be half that, and 3-4x as fast, and able to service vastly more locations with point to point services, and will drop in price by 3-5x over the following decades. Autonomous taxis will take the rest. Passenger rail is dead as a dodo and autonomous electric trucks are going to kill rail transport within 10 years too.

I’ve seen the autonomous but piloted glossies in articles that show them doing longhaul on the interstate systems.
But we dont have many roads with center barriers, or two lanes outside the city.
But we may try, I can’t wait to see the headlines when autonomous truck meets an autonomous Tesla on the end of an overtaking lane on the
Bryndwyns.

Or when some kid hacks into the control system , and crashes it into the beehive.
That's the main thing that will stop auto trucks , the threat of terrorist misuse.

Looked at it like that it is the drone problem all over again.

Financial jugglery ? I thought that was the preserve of National. Well, power does strange things to the holders.

Next year the valuation will be doubled due to the rails network aligning with cosmic forces and local traditions.