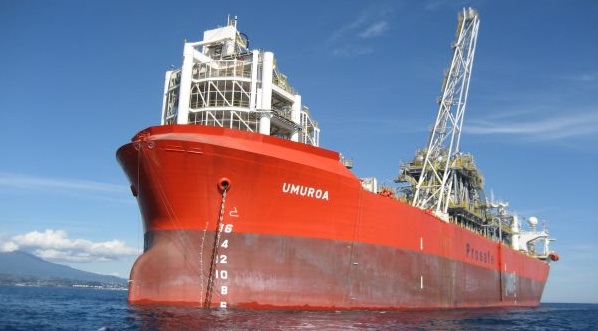 The Environmental Protection Authority (EPA) has ordered Tamarind Taranaki - an oil and gas company in voluntary administration - to stop extracting oil due to it being responsible for a small spill.

Interest.co.nz on Monday revealed oil was last Thursday found on the water about 400 metres from a floating oil and gas storage and offloading unit (the Umuroa) that Tamarind was using as it gathered oil from the Tui field.

The oil covered an area 20 to 30 metres wide, about 60 kilometres off the Taranaki coast. Tamarind believes 100 litres of hydrocarbons was spilt. The oil dispersed naturally.

The notice prohibits the Malaysian-headquartered Tamarind from exacting oil from certain wells at the Tui field until it can "conclusively" identify the source of the “hydrocarbon sheen” and provide evidence its systems are robust.

The EPA said the company detected a 10 to 12-metre-long split in the outer layer of a “flowline”, or pipeline, connecting the Umuroa to a well. This is where hydrocarbons leaked out of.

Tamarind wants to resume extraction in the next couple of days, but the EPA isn’t satisfied it’s done enough to rectify the situation.

It said the “acute failure” of the flowline calls into question the integrity of remaining flowlines.

It also said Tamarind had not established the cause of the rupture and proven there weren’t other leaky flowlines.

Tamarind’s entry into New Zealand exposed what Energy and Resources Minister Megan Woods describes as a “loophole” in the Crown Minerals Act, which she closed in 2018.

This enabled Tamarind to buy the Australian permit operator of the Tui field, AWE Taranaki, in 2017, without going through the checks that would be required of an applicant of a new permit.

As per Tamarind’s case, there’s a risk these companies aren’t properly resourced, which poses environmental and financial risks.

Decommissioning the Tui field is estimated to cost $155 million.

Tamarind’s administrators, Borrelli Walsh, had been looking at ways to keep production going at Tui for a bit longer before decommissioning.

However BW Offshore, the owner of the Umuroa, which has serviced the field since 2007, is preparing to disconnect and demobilise the unit as the termination of its contract takes effect on December 31.

It said: “The potential total EBITDA [earnings before interest, tax, depreciation and amortisation] exposure for both past and future hire could be up to US$23 million by end of 2019.”

Privatise the profits, socialise the losses

Brought to you by the party that has the safest pair of hands.

Better plan for the import of LNG - SWAG cost $1-5 billion. Don't count on getting anything out of Tamarind - they can move faster and hire better lawyers than any Gubmint....
The LNG cost includes:

WHY? We have enormous reserves onland, we just need to get of our asses and tap into it, where ever there's coal there's gas...