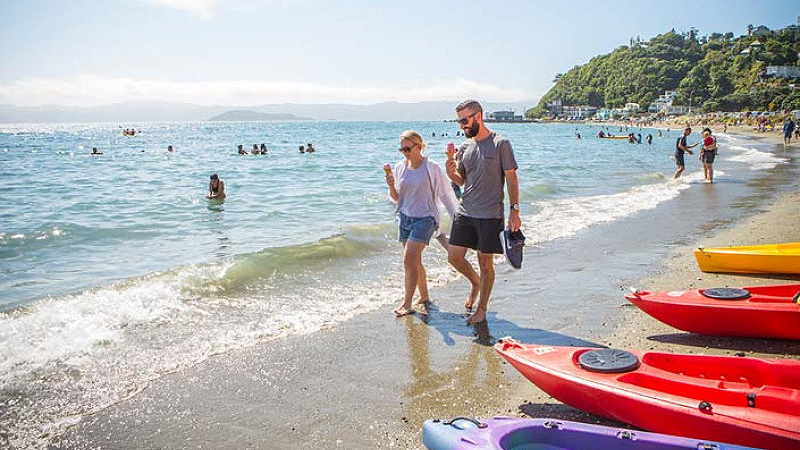 Good morning, wherever you are. Here's our summary of key economic events overnight that affect New Zealand, with news of generally stable economic conditions worldwide.

Housing starts in the US took off in December, up +40% from the same month a year ago, which admittedly was unusually weak. But it may be a short-lived boost - building permits for residential construction are starting to tail off from recent rises although they are still +6% higher than a year ago.

American industrial production wasn't so flash however, coming in a full -1% lower in December 2019 than December 2018. There are many sectors with large declines, and without gains in IT and especially defense spending, their manufacturing sector would have been in a crisis situation.

Job openings are shrinking, and actually shrinking fast. They fell more than -7% in November from October, and are down -11% in a year.

Despite that, consumer sentiment remained virtually unchanged in early January, differing by just 0.2 Index-points from December.

Yesterday we reported that the Atlanta Fed's GDPNow calculation has economic growth shrinking to just +1.8% pa for Q4-2019, a fast retreat. Today we can reveal that similar tracking by the NY Fed has it even lower at +1.2% pa.

Balancing off the American weaknesses are still-healthy Chinese gains, even if they are lower than in recent years. The percentages may be lower but the absolute gains are still large.

China reported that its economy grew +6.1% in 2019 ending the year with Q4 growth slightly lower at +6.0% which was the same expansion at Q3. A slew of other December data was released at the same time showing industrial production was up at the rate of +6.9% in December and the second highest month in 2019. Coal and oil production hardly rose at all, but electricity generation was up +3.5%. (Many see this electricity growth data as a better reflection of actual economic activity.) Fixed asset investment - another key economic marker - rose +5.4% in December. Retail sales were up +8.0% in December compared with the same month in 2018.

Fast economic growth and no population growth will mean China is making quick gains in per capita income levels. China recorded its fewest births in 58 years in 2019, with down to +14.7 mln, and lower by -580,000 from the previous year, according to official data. Their population has just nudged 1.4 bln people, a rise of just +0.3% in 2019. Their working aged population is 64% of the total. (That compares with New Zealand where the same data is 65%. Our population grew by nearly +1.7% in 2019.)

The Australian bush fire news is seriously undermining their tourism industry. An internal survey conducted among its 850 members of the country's peak export tourism body showed that 70% of them were seeing a lot of cancellations from their big key markets – America, Britain and China. They estimate the cost is -NZ$5 bln already and things are likely to worsen from here.

Gold is higher today, up +US$7 from yesterday, now at US$1,558/oz although that is exactly the same level as a week ago.

The Fear & Greed index we follow is still hard over on the 'extreme greed' side. Volatility is low, with the VIX now at just over 12. The average for the past year has been 15. Neither represent a change from last week.

US oil prices are also little changed, now just over US$58.50/bbl and the Brent benchmark is down too at just over US$64.50/bbl. The US rig count rose surprisingly this week, but only by the amount it fell last week and the levels are still approaching a three year low.

Bitcoin is up +2.3% from where we left it yesterday to US$8,883 and it is up another +10% from this time last week, up +24% since the start of the year. The bitcoin rate is charted in the exchange rate set below.

Fast economic growth and no population growth will mean China is making quick gains in per capita income levels. China recorded its fewest births in 58 years in 2019, with down to +14.7 mln, and lower by -580,000 from the previous year, according to official data.

Despicably, Jay Powell and his compatriots, though, they say the economy begins 2020 in a good place. No, this economy begins the twenties at the morgue. Literally and figuratively. It’s the one place where there has been inflation. Link

If readers peruse one thing over the weekend, that link should induce some thought.

Compare it to the lightweight (caught outright falsifying, in one case) nonsense being bleated hereabouts recently. We seriously are approaching a 'period of consequences', and it may well be that those societies which failed before us, had the same ' nothing to see here' hucksters too.

It would be nice to think we could up the intellectual game, considering the consequences.

Had a look and hit at random this sentence: ""We require viable ways forward across different timeframes, first to navigate the rapid-onset acute crisis which the bursting of a financial bubble will pitch us into, and then to reboot our global operating system into a form less reminiscent of a planet-killing ponzi scheme."" The writing style puts me off. I suspect I agree with the author but have no desire to wade through this type of prose to maybe learn nothing new. I failed English at school so I'm sure a better critc would find more faults: what meaning does the word 'viable' add other than to sound clever - in this context 'ways' implies viability. Then loads of assumptions - maybe there is a crisis and maybe it is close at hand (this afternoon , this year, my lifetime?) and acute (in context meaning what?) then the financial bubble - bursting implies something like black Friday 1929 but why not a gentle deflation or even just achieve a steady state and remain as is (for example I've been waiting for Auckland housing market to shatter and prices half - waiting for 17 years). It is just too many metaphors: pitching and bursting and navigating and booting and killing. It will appeal to the converted. Something written in cool clear English would be more likely to make the rest of us think.

You can 100% predict a consequence. That is easy. Draw down a fixed amount of anything at exponentially-increasing rates, and it's ano-brainer; your last doubling is the last 50%, and it's all gone

So readjust it will.

Yep it's not just China that is suffering from a falling birth rate it seems to become more of a global problem between that haves and the have nots. Basically having children is too darn expensive for most people. Take Russia for example: BBC article: Russia's Putin seeks to stimulate birth rate. https://www.bbc.com/news/world-europe-51120165

The worlds population shrinking! That would be a disaster for property owners; what rent can you get when there are more properties than people? It is clever of our govt to grab immigrants from all over the world before the Chinese, Russians and Japanese think of it. As prof Spoonley recently pointed out judging by registering of birth names in 2019 the majority of children in Auckland are the sons and daughters of immigrants.

Easy. We get the Callahan Institute to research GM children, and our IT Department to 3D print them. Then we can send them all over the planet for a print-your-own fee. What's not to like?

An interesting article on Stuff about Anne-Marie Brady.
https://www.stuff.co.nz/national/politics/118630157/christchurch-academi...
""Fonterra's Chinese partner, Sanlu, kept quiet about melamine in its milk, a scandal that rebounded in New Zealand. Their CEO had to follow party discipline above reporting to Fonterra."" I had been wanting to know that since 2008.

NZ is lucky that it keeps producing mavericks.

Prof. Anne-Marie Brady continues to be ostracized by our own politicians

Ever since releasing her groundbreaking “Magic Weapons” report which highlighted the influence the Chinese Communist Party (CCP) has over New Zealand’s political system, political analyst Prof. Anne-Marie Brady has seen continuous attempts to intimidate her work in her own country. What is even more concerning is that her plea for help from her own elected politicians have fallen on deaf ears, instead becoming ostracized by them.

The latest example of that ostracism happened this week, as Brady was blocked from making a submission to Parliament’s Justice Select Committee. Opposition to her appearance mostly came from Labour Party MPs, in fact the select committee itself is chaired by Labour list MP Raymond Huo.

Upon publishing her report, the University of Canterbury professor has urged the Government to look more closely at creeping CCP influence over our political system. Especially as she noted in that paper that “China’s covert, corrupting and coercive political influence activities in New Zealand are now at a critical level.”

""She is not anti-China, she says, just keen to alert that the CCP has to be watched. 'What New Zealand should do is engage with China as much as we can. But we need to put good boundaries within our domestic system' "".

But sadly, those mavericks have limited spans (my future predictions). As you can read the comment below that Stuff article specially from local China propaganda marketing agent, like 'SoymonSez'. see how the person addressed JK, BE, Ozzie Banks to fund the 'majority of American' share holders etc. (which basically 100% China entity that pretend to come as from USA company) - Kmart OZ started to switch to Indonesian production export (alas, those actually Chinese operated entity too).. your local Kathmandu stores started to import from there too, yip - they are all basically Chinese own) - The whole ASEAN countries recently open trade with China (via most of the major companies in each respectable countries that already affiliated heavily with China) - Alas, only one other big country refuse it (India). Anne-Marie Brady, raises a valid concern, it's about CCP rather than China itself. BUT looking in the past history of 'Commonwealth'? I have yet to be convince by any intelligent readers out there in this planet, as to what is the benefit to the local/country/native community that has ever dealt with China? - apart from a few upper echelon of their individual countries leadership systems that allowed the flow of China influence. China is for China only, it can change on many forms but the end result must be the same, United Front, United Result/goal, always been like that.. the past 4000-5000 years or so.. will it change? you have to experience it yourself to answer that.