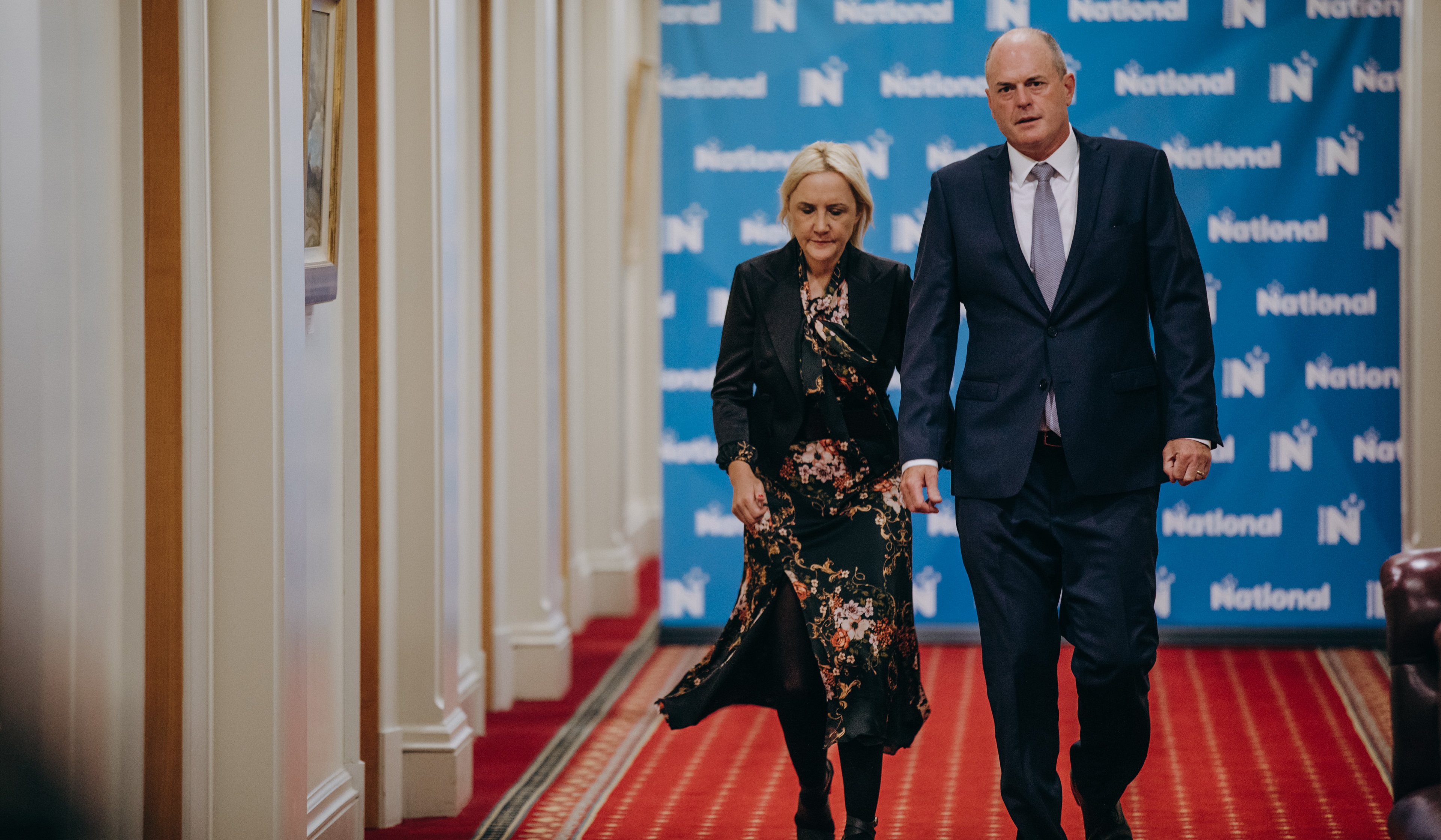 National MP Amy Adams appears to have reconsidered her retirement from politics now that Todd Muller is leader.

Muller has pulled her up to third on the party’s list, behind Nikki Kaye, giving her the newly created role of ‘COVID-19 recovery’ spokesperson.

Adams - a former senior Cabinet ministe - in June 2019 announced her retirement from politics at the 2020 election. While she stayed on as the MP for Selwyn, she stepped down from her finance and shadow attorney general roles.

Muller placed ousted National leader, Simon Bridges, at the bottom of the list, but said there would be a place for him in Cabinet should he decide to stay in politics. Muller said Bridges needed time to reflect on this future.

Bridges responded via text message: "I am not considering my future. Just having a small amount of time out to take stock after the loss on Friday.

"I am the candidate for Tauranga and intend to stand and help National obtain an historic win. Happy to be on the back benches for a while and be a good local MP."

The party’s former deputy leader, Paula Bennett, has been dropped to 13th on the list, losing her social investment and social services role to Louise Upston. Bennett will no longer be the party's campaign chair ahead of the September 19 election, with this job being given to Gerry Brownlee.

Paul Goldsmith remains finance spokesperson, but has fallen from third to fifth, losing his infrastructure role to Chris Bishop and state-owned enterprises role to Andrew Bayly.

Judith Collins remains at four, but has had her housing and urban development and RMA reform portfolios replaced as she’s become the spokesperson for economic development, regional development, shadow attorney-general and Pike River re-entry.

A key Muller supporter, Nicola Willis, has been given the high-profile role of housing and urban development, and been bumped up from 45th to 14th on the list.

Meanwhile, Bishop - another vocal “Team Muller” member - has jumped from 15th to 12th. He has key portfolios, transport and infrastructure.

Brownlee has gone up a few places to sixth, and is followed by Michael Woodhouse, who’s also been given a slight boost to seventh. He will remain National’s health spokesperson.

Bridges supporter, Todd McClay, has fallen from fifth to 11th on the list. Meanwhile Mark Mitchell has been pushed down from sixth to ninth.

Bayly has jumped from 32nd to 19th, getting portfolios of associate finance, revenue, commerce and state-owned enterprises.

Any change in ranking for Jian Yang?

no he stays the same, I was looking at that very closely

Stuff understands Muller offered Bridges the Justice portfolio, but Bridges turned it down and asked for Foreign Affairs instead - which Muller declined to give him.

Of course, Simon had that truly unbelievable pro-CCP PR trip organised by Jian Yang last year. No doubt he wanted to keep up those connections;

Of course, Simon had that truly unbelievable pro-CCP PR trip organised by Jian Yang last year. No doubt he wanted to keep up those connections

Could be a pot of gold lying in wait. But being dumped by the team will not endear him.

You mean the China trip where he met the 25th in line just after Jacinda met the No1 in charge ?
So you saying the No 25 tells the No1 how to run the country ?

He is the opposition leader not the PM and that #25 was a politburo member, Bridges went on to praise the CCP then went on to meet with and praise a Nazi sympathizer in the Philippines.

The less we see of Brownlee the better,for all concerned. Bellamy's will be glad he will be spending some time away from parliament.

So much for spending more time with his family.

they do its called the national party, brought and paid for in advance

How did Melissa Lee manage to get so high up? She's got the political awareness of a snail, and got lucky she was up against Clare Curran.

4th from the bottom.

She's of Korean descent isn't she. So we can't cast pro-China assertions on her.

What is there to do?

Sounds like the kind of job she could do and retire at the same time...

Lots.
You have to be contrarian every minute of every day.
That can be draining.

Heaven forbid someone push back against the narrative using objective reality. Funny how we don't hear much about the importance of journalism speaking the truth to power like we used to.

Unfortunately we don't hear much speaking truth to power, no.

We sadly seem to mainly see speaking opportunistic and often self-contradicting twaddle to power, to froth up rabid Facebook followers.

Define 'objective'.
Do you mean, with reference to (damn lies and) statistics? Perhaps, operational logic? Or that old chestnut, valid only through verification of exactly the same conditions? Or, since you're talking journalism, the idea that objective journalism arises from presenting an opposite position to a stated view? This last one has long been discredited in media theory, as binary pairs almost always have a preferred reading for one position. This is also known as agenda setting.

Covid 19 Recovery seems more like Economic Affairs and Financial/Business Revival. Nothing to do with vaccines, lockdowns, etc.

They appear to have left out big tobacco.

Painting trains in tobacco colours may make them go faster? It works for Formula One cars.

Could be expanded to full tobacco sponsorhip of Government Ministers.
They could all wear race type suits with all the different tobacco brands.Muller could swap out his MAGA cap for a Marlboro one.
Ashley Bloomfield could light a fag up during his presentaions.
Imagine,no other country is allowing tobacco sponsorship,we would be global leaders,the billions would flow in.
Extend it to alcohol and we will be back in surplus before we know it.

Like Sarah Dowie, or is she running for the new J.L Ross party ?

Adams will roll him not soon but later. For a Monty.

What will the Bay of Plenty boys do then, leave parliament and buy a Kiwifruit orchard.

The Chinese Ambassador won't be happy with Muller's wrong statements.

Or his MAGA hat or his "love" of American politics.

Unfortunately, I think Adams and Kaye (esp Adams) are going to struggle to keep their political egos in check. They have held top cabinet positions before.
Muller sounds like less actual businessman and more lobbyist to Govt for business.

At last Hoots is off the pundit spots.

I had heard good things about Kaye but I heard her on Radio NZ the other day and i thought she came across pretty average.

Agree, she looked and sounded disinterested in her interview with JC today.

You mean Paula Benefit, sorry Simon, I just can't believe you called her that two days in a row. You must be stressed out. Best you take some time out. Your missing out on the Foreign Affairs position was a blessing in disguise.

Shadow Minister for Pike River Reentry. Sounds like a slap to Key.

His caucus will be divided. Unlike Arderns. Adams will smell her chance post election Labour win. She'll eat him up from within.

She carries the baggage of removal of democracy from Cantabrians.

It might have gone down well in Fonterra circles, but it was anything but honest. Only Collins carries worse baggage.

But the question, as always, is: Are they future-appropriate? And the answer is

He is sounding a lot like Bridges to me, no conftrontational politics, yeah right. Lets see what happens at the end of next week.

Shades of Bridges. And Adams only has the agro.

Hard to argue against Muller saying there are three heavy lifters in Labour and the rest are baggage.

Ardern, Little and Faafoi..... some might suggest Robertson should be included... but Treasury and the RBNZ are a complete shambles.. on his watch.

But you couldn't rank the performance of any of the others above 3/10: Curran, Hipkins, Davis, Twyford, Woods, Nash, Clark, Parker, Lees-Galloway

Has anyone actually found Kelvin Davis or David Parker yet? They have been missing for 2.5 years.