Todd Muller supporters, Nikki Kaye and Amy Adams, to retire from politics at the election; Kaye didn't fight to retain a leadership role in the party; Both say they support Judith Collins

Todd Muller supporters, Nikki Kaye and Amy Adams, to retire from politics at the election; Kaye didn't fight to retain a leadership role in the party; Both say they support Judith Collins 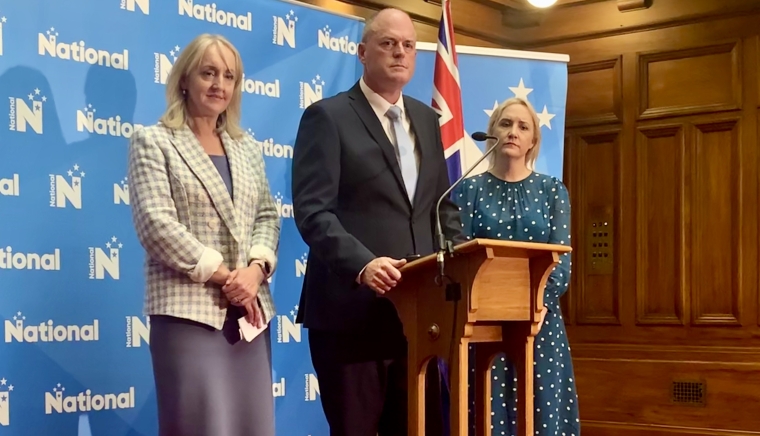 Kaye’s announcement follows her losing her role as Deputy Leader of the party, with Todd Muller stepping down as Leader on Tuesday, citing the toll the role took on him and his family.

The Auckland Central MP said she didn’t throw her hat in the ring for Leader or Deputy when caucus elected a new leader on Tuesday night.

Meanwhile Adams: “Last year I made the decision that I would retire at this election and accordingly I did not seek nomination for the seat of Selwyn that I have held for 12 years. In May I was asked to stay on as a list only candidate and take on the role of co-ordinating our Covid-19 Recovery policy framework.

“As I said at that time I decided to stay because with the scale of challenges the country was facing, I saw being able to contribute in this way as an honour and a role I could not turn down.

“With Todd Muller’s decision to resign the leadership the most important issue for our party was to get a strong and effective leadership team in place without delay and I am proud at the way in which the caucus managed this.  I am in no doubt that in Judith Collins we have the right leader for the challenges ahead and Judith and the team have my full support.”

Kaye too said: “I offered my support to Judith prior to the caucus vote. While Judith made it clear to me that I would be part of her Senior leadership team and Education spokesperson, I am ready to retire.

“I believe Judith is absolutely the right leader for the Party at this time and I will be supporting Judith and the Party to win this election. New Zealand needs National.”

Collins will announce a caucus reshuffle at 10.

Muller has not signalled a retirement from politics.

Kaye said: “While I don’t think it was possible to predict the events that have occurred, what I have learned from breast cancer and other life events is you can’t always predict what is around the corner. I have huge respect and admiration for Todd, Michelle and their family as they work through this difficult time. I hope that people continue to show compassion for Todd.

“I have spent most of my adult life serving the public and the National Party. This is personally the right time for me to leave. Cancer has taught me that life can change in a moment and I am ready for the next chapter.

“It has been a privilege to serve as MP for Auckland Central for nearly 12 years, Deputy Leader (briefly) and as a Cabinet Minister in the Governments of both the Rt Hon Sir John Key and Hon Sir Bill English as Minister of Education, ACC, Food Safety, Civil Defence and Associate Immigration and Education.

“I have been very proud to progress the large investments in school infrastructure, the roll out of fast uncapped school internet connections and progressing digital fluency and second language learning. I am also proud of delivering significant ACC levy cuts and passing legislation ensuring greater transparency of ACC levies, food safety reform, cell alerts for civil defence and recovery legislation.

“As the first National MP to win Auckland Central in our country’s history it has been an absolute privilege to serve four terms. I have loved being a local MP progressing projects such as a conservation park for Great Barrier, a number of local school redevelopments, the City Rail Link and apartment law reform. I intend to support the party to find a candidate quickly to ensure Auckland Central continues to have a National MP. I want to thank the people of Auckland central, Waiheke and Great Barrier Island for their support over the past 12 years.

"I have always tried to be a strong advocate for freedom and personal liberty during my time in Parliament particularly around conscience issues. I also hope that the work that I have done in areas like education has made a positive difference to young people.

“I will never forget the compassion showed to me by the people of New Zealand when I was diagnosed with breast cancer. I am grateful for all the opportunities the National Party and our great country has provided me.”

Adams, who issued a shorter statement than Kaye, said: “My time as an MP for the National Party and as the MP for Selwyn has been an honour and a privilege and I remain humbled and grateful at the opportunity I’ve had to serve this country.”

I just cannot wait for tagging of the hoardings to start.

they had 20 women mps and now you have 7 quitting this election,

Which is the right number is they have an average tenure of about 3 terms. Renewal to allow new talent to come through is important (as Labour's cabinet has illustrated this past term)

I remember Hosking's headline on the Herald the day the COL won the elections: "It's already a mess!"
Gave me a chuckle, obviously Hosking was just pushing the National narrative. The true irony has just revealed itself now... National is "already a mess!" months before the elections.
Nat voters, could you please enlighten me why you'd trust this party with leading the country? A party that can't even lead itself, and whose only policy at the moment is to "crush the government"?

Let Crusher be the first to Crusher the like of you.

At least Brownlee’s thrown his weight behind her. JC’s huge problem is that many of her caucus neither like nor trust her. There will be much shafting as time marches on. Can’t give everyone a sweetener to keep them on side.

Believe Nikki Kaye was of quite some value and not just to National. She had come back to parliament courageously from her own health issues and the last few weeks must have been absolutely torrid & horrid for her. Who can blame her for finally recognising the toll on her had reached the point of no return. As for the other one though, the toys went out the window, went and got them in again only to throw them out the window again. Reminds me of her predecessor Richardson abandoning the people that had trusted her with their vote, but found she was up and gone as soon as she lost the finance portfolio.

Those two were the much talked up National Party experience. But they probably needed to go to. Collins ultimately too. Woodhouse too. Then there can be a proper reinventing of the grand ol party.

Yeah, seems like they've declined morally and promoted all their Dirties.

We need a Neo National party to be started with all the deserters.
Winston is having a chuckle and Hosking is having a fit.
Jacinda is over the moon, obviousle, thought she is not showing it. Wise Girl.

I would not be surprised.

Expect some radical policy proposals. It's the only chance the Nats have now.

The socialism for older folk and asset holders off the back of younger generations shall continue.

With Collins in charge it'll be Trump-lite, but with the twist of sucking up to China rather than antagonising them. Fortunately this is not America, and while it'll please the party rump the general public will be turned off.

The National Party economic recovery plan will be the same as it always is: tax cuts will save us! And more migrants to keep real estate dollars flowing.

Immigration is almost NIL for the next 12 months. So here some good ones for Judith to think about if she wants a real chance of snatching it from JA.
1. Levy for properties other first home or family home.
2. CGT
3. Small FHB Grant.. that will buy your votes.
4. 10% salary cut for MPs for the next 3 years (all of them aren't exactly in any kind of hardships)

As an FHB, please for God's sake don't give FHB's free money. All it ever does is pushing up the lowest price bracket by the amount of the grant.

If they levy investment properties it will be offset by that.

Judith has already ruled out any tax on assets, wealth or inheritance while she is prime minister. So no to CGT.

Yet she also said we needed to widen the tax base. I do hope the media force her into explaining how she intends to do that.

Radical and believable. The believable bit is the hard part.

Why does it have to believable? Labour set the bar low for that last time. Hell, it doesn't even have to be plausible.

Sux it up and enjoy

This is the big sandcastle facing incoming tide!

The line up last time they governed;

Strange, I was thinking about that too. And then I went quite back a bit further to National’s line up for the first term of Bolger’s government.That led me to recall during that period a column by the accomplished Dennis Welch in the Listener accompanied by a cartoon depicting a lubricated Minister of Finance Richardson, quaffing a large glass of Grange and exclaiming “the peasants in my country don’t know how lucky they are.” One thing Muldoon knew and valued well was not to lose touch with us, the ordinary folk on the street if you like. Failure to subsequently observe that fundamental consideration has contributed markedly to the present woes I do believe.

I felt Muldoon, though dictatorial, was just one of us. I recall a photo of him mowing his own lawn. Those were the days when few politicians (if any) were financial and corporate tycoons.

I think Todd Muller might have had some sense of this. He was developing a homely, earnest image and I don’t think that was against his natural type at all. But he was ill prepared, and then undone by the shenanigans that unfolded. Not a fair fate at all.

Simon is the clear winner in all these goings and doings.. Well done, Simon.

Apart from having lost the leadership, you mean.

Like a Phoenix, he has risen from the Ashes.

Worst person ever to give foreign affairs to. MFAT would not be happy, as I doubt they'd ever have set up a meeting with the head of the CCP's secret police;

Oh, come on. He would reinforce and showcase that vaunted Kiwi accent througout the world. Colbert would love to have him on his show. NZ would get some great PR that way.

How about John Oliver then. Wasn’t there something about sitting under an ISIS flag?