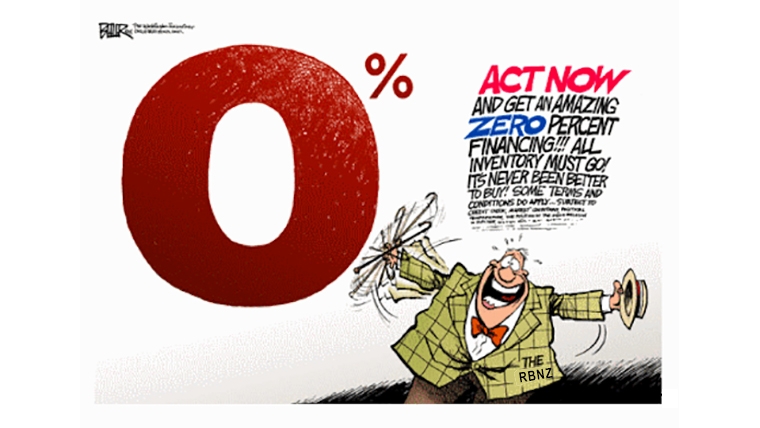 Every wholesale swap rate is a record low Wednesday, except the 10 year. The record low for that tenor is 0.49% which was reached on August 25, but is sure to be breached soon.

These minuscule returns are being driven by market acceptance that the Reserve Bank of New Zealand will cut its Official Cash Rate to zero soon, and may even go negative.

What that will achieve is uncertain. What the RBNZ wants is to encourage is investment and spending, and by implication, jobs. But if 0.20% doesn't do that (the two year swap rate on August 1), it seems very unlikely -0.20% will either.

But it will effectively wipe out returns for savers, returns that were already almost non-existent. Bank treasurers can borrow wholesale at 0.0025% so why would they want to offer retail savers anything?

Hi David. Is this the spot rate to given to ‘fix payments’ on floating debt/asset... being 1 year and 2 year terms?

Okay, throw me a million and I'll find something to do with it.

What would you do with it?

This is absurd
These guys have absolutely no idea what they are doing.
As you rightly say if 0.2% didnt make any difference what the hell difference will 0% make?, none whatsoever, except that every single person who slaved all their lives to save for their retirement is now so screwed and their funds will just dissipate until there are many thousands of penniless elderly looking for a place to sleep and a free meal to keep them alive one more day.
No-one is going to invest their funds anywhere, just a downward spiral to nothingness.

As you rightly say if 0.2% didnt make any difference what the hell difference will 0% make?, none whatsoever, except that every single person who slaved all their lives to save for their retirement is now so screwed and their funds will just dissipate until there are many thousands of penniless elderly looking for a place to sleep and a free meal to keep them alive one more day.

Reverse mortgages. Sell the house back to the bank.

rcd - that was always going to happen.

Your 'savings' were only forward bets - the underwrite is ebbing. There was no guarantee; only the blindness of economists, who projected past trends forward indefinitely. You could do that with your Plunket book, and you'd be the height of the Eiffel Tower. You aren't. Ask why, and the reason is physical, not financial/fiscal. Same problem here; the problem is physical.

An unelected, unaccountable central bank forcing interest rates down to zero is about as capitalistic as a Soviet bureau determining what the price of shoes are and how many I should produce.

ST - neither social construct is to blame. This is physics; energy and resources in, stuff and wastes out. Finite source and lowest-hanging fruit all picked and gone already.
Read this:
https://www.sciencedirect.com/science/article/pii/S0921800919310067

There goes the point I hammer hereabouts; money isn't the driver, merely the token, and it's issued in ever-more numbers betting on ever-more stuff. This is the knock-on effect of not enough energy, not enough stuff, not enough to bet on any more. 2008 told us we were into betting on nothing already. Zero interest-rates are the correct fit going over the top of that graph (near the end of the paper I linked) and below-zero in theory comes next (if things stay intact).

Nice link, just finished reading. It's painfully obvious that we've hit or approaching rock bottom re monetary policy etc. With a Slow down or worse elinevitable, Though I had not previously made the link/jump to the energy side of things. I mean I know the easy oil was already taken, but not the gdp or efficiency side.

Also the description of it being an unintelligible organism doing its thing, rather than evil actions perpitrated by a bank/government (as comments here often promote).

OK. So... We buggered. Fine. What next? Particularly for those that can see past next week's mortgage payment?

How to shift the worlds thinking and actually start to solve this? Or do we just wait for the breakdown?

The Mogwai ZIRP is just waiting for the banks to update their systems, then, at some future midnight - a Gremlin called NIRP will manifest.

Seems Jarrod is the only one that can see the dangers

Why would anyone buy something today if they expected the cost to be lower tomorrow?
That applies not only to the new TV but to money itself as well.
Why borrow at today's rates if you expect them to be lower tomorrow?
And when that happens, development stops and prices fall - voila - Deflation.
The only reason to borrow today is for speculative purposes ( the non-productive gain is asset value will offset the possible lower cost of finance).
That's what we have created for ourselves by lowering rates - a speculative, bureaucracy-enforced, deflationary economy(s).

bw - no. You're mistaking cause and causal.

Read the link I posted up-thread. Pour a coffee, divest other thoughts, and take the time to read it all. Note the Gaussian-style line graph.

Yes, we did it to ourselves. No, not by lowering rates. They are a reaction.

I'm not mistaking anything.
Just stating the obvious.
Why that is is as much your interpretation as mine.

That cannot be true. One of us must be correct, and beginning from first principles.......

Don't blame anyone, we all did this collectively (as the Wright excerpt in that link points out - Short History of Progress is a must-read for everyone), but upping interest-rates wont change the predicament humankind has brought upon itself.

so does this impending energy slowdown happen as fast and as large the the upturn (like the whole industrial carbon burning growth period since the 1940's upturn?)

Like even if you where dictator of the world, could you even get renewable energy science to the point of keeping GDP neutral? (including reliance on things like copper etc?)

Like i was assuming we'd just rocket off to another planet at some stage, though have we already reached the point where we've consumed too much of our available energy and we could't drive tech forward fast enough to achieve this anyway?

Like are we already dinosaurs, and we are about to hit 1000 years of slow decline? (serious question).

Beacuse leverage on its own always had an end point

We have had a tech break-though - internet communication, global markets, automation etc. Unfortunately this is the biggest deflationary anchor of them all, especially on the labour markets.

a double edge sword
they have also lowered costs which made things more affordable => increased discretionary spend
Internet is basically only information & market reach - Ultimately this has a limit in driving growth ... all corners of the world are tapped
What we really need is science tech which can "extract" more value out of resources available

All people will continue to buy goods even though they expect lower prices in the future because most expenditure isn't discretionary -- rent, food, car, kids' expenses. I don't for one minute think that's what Orr is primarily concerned about. I think he's petrified about people's ability to service debt in a low growth environment, and the systemic risk that brings.

So my 2013 prediction on here of interest rates trending down looking pretty good then.

you were late predicting the trend

I made the prediction based on (M.V)+i=P.Q, then went looking for data to support it. It is the why that is important.

Later I worked out a theory for the front side, or ramp up. That came about by looking at the US10yr, which has been issued since 1790. Same pattern can be observed since WWII, just compressed compared to the prior one. Gives an insight into what we are up for.

It bears repeating that Central banks want inflation yes?
Real interest rates are zero or negative (after you deduct inflation)
So, that implies that real rates are already at - 2% at least.
Borrowing is NOT increasing as gov and CB wants.
Instead the extra money is being swallowed back by banks who lend on mortgages at ever higher amounts.
The money spent on the house/land goes to the owner/seller, yes, but it appears that unless the seller already has a house, the amount does not add to general demand in the economy.
Credit card balances are falling. People are saving more. And unemployment is about to rise.
It is common economic knowledge that the bottom third fo income distribution propensity to spend is far higher than top third because top third don't need to spend it all. Yet gov announces a tax only on top 2% and no tax allowance for bottom third. This policy will not succeed in boosting economy. USA did huge QE and smashed interest rates 2009-2020, and got USA growth to only 2% pa. And their real inflation in USA, as Mauldin has convincingly shown, is around 6-9%.

the workers are also the consumers ... so youre right - they need to be able to afford the output of their labours
we have a situation where the underlying cost of producing now exceeds the value the market can really afford to pay
the system is basically insolvent

Arguably if you gave spending power to the masses, you would get a short sugar boost before inflation kicked in hard (aside from a faster trashing of the remaining resource base) ... the resources simply arent there to hold up historic growth and all those forward bets of MORE

This shows what inflation does to wages and inequality.
Stealth theft. So inflation undermines capacity to service a mortgage, as real income is eroded.

Crazy world... how on earth can this really solve the problem or just buy more time for God knows what................ I'll vote whichever party announce UBI in its policy!