Bank for International Settlements highlights the rise of lending by big tech companies, noting it's growing faster than fintech lending

Bank for International Settlements highlights the rise of lending by big tech companies, noting it's growing faster than fintech lending 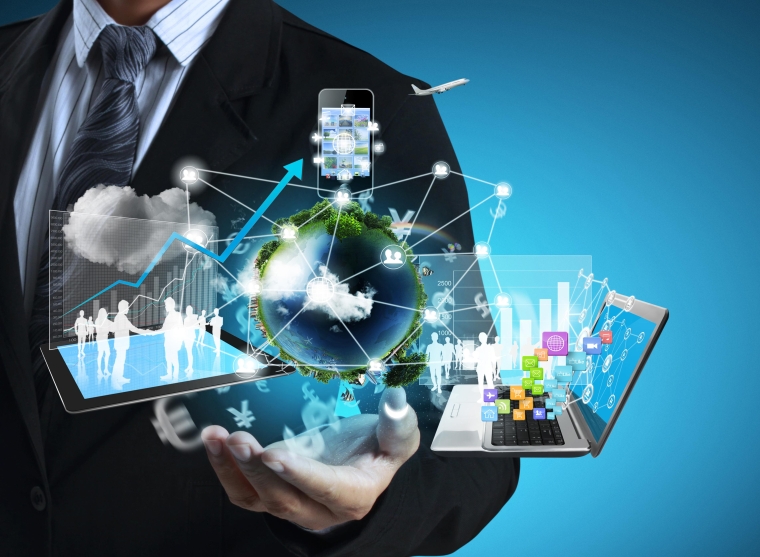 Big technology companies may have peddled as much as US$572 billion of credit/debt globally last year which could be at least twice as much as fintechs, a Bank for International Settlements (BIS) working paper suggests.

"Available data and estimates show that fintech credit volumes reached US$297 billion in 2018, while big tech credit volumes surged to US$397 billion. This represents a dramatic increase since 2013, when volumes were only US$9.9 billion and US$10.6 billion, respectively. Combined lending by fintech credit platforms and big tech companies thus reached US$694 billion in 2018. While still small overall, fintech and big tech lending flows are much larger relative to the stock of lending in certain economies, notably China and Kenya," the BIS working paper says.

"We estimate, subject to somewhat greater uncertainty, that the stock of fintech and big tech credit reached US$303 billion at the end of 2018, or about 0.3% of the stock of overall credit to the private sector in markets around the world."

"Based on the estimates for 2019, big tech credit volumes may have been as large as US$572 billion in 2019. While definitive fintech credit volumes are not yet available, estimates based on higher-frequency sources yield a global volume of US$223 billion. This means that big tech credit was at least twice as large as fintech credit in 2019. There is substantial variation across countries, with the sum of fintech and big tech credit flows ('total alternative credit') equivalent to 5.8% of the stock of total credit in Kenya, 2.0% in China and 1.1% in Indonesia. In other major markets like the United States, Japan, Korea and the UK, fintech and big tech lending flows are less than 1% of the stock of total credit," the BIS working paper says.

The authors note that at US$223 billion, global fintech credit volumes actually declined in 2018-19 due to Chinese market and regulatory developments.

The paper points out key differences between the two types of credit. Fintech credit models, it notes, were initially built around decentralised platforms where individual lenders choose borrowers or projects to lend to in a market framework. Some platforms have, however, moved to fund loans from institutional investors rather than only individuals, and many use increasingly sophisticated credit models. Nonetheless the core business of fintech credit platforms remains financial services.

In contrast big tech firms have a range of business with lending just one, typically small, part. Their core business activity is generally non-financial.

"These [big tech] firms have an existing user base, which facilitates the process of onboarding borrowers. They can use large-scale micro-level data on users, often obtained from non-financial activities, to mitigate asymmetric information problems. While these large volumes of information allow big tech firms to effectively measure loan quality and potentially reduce loan defaults, it is also plausible that they could raise problems of price discrimination, and concomitant issues for competition and data privacy. Policymakers will need to weigh the efficient loan supply potential in their economies against issues of discrimination, competition and privacy when deciding which types of credit to encourage."

"For both fintech and big tech credit, understanding the size and growth of these markets is of fundamental importance for policymakers who monitor markets and set monetary and macro-prudential policies based on credit aggregates. Such data are also essential for research on credit and digital innovation. A key contribution of this paper is thus to assemble estimates on the size of these markets and make these available for policymakers and researchers as a public good," the BIS paper says.

'These alternative forms of credit seem to complement more traditional credit markets, rather than substitute for them'

China is the biggest market for both fintech credit and big tech credit. Big tech companies such as Alibaba’s Ant Group, Tencent’s WeBank, Baidu’s Du Xiaoman and e-commerce platform JD.com lent US$363 billion in 2018 and US$516 billion in 2019, according to People’s Bank of China data.  While the United States is the second biggest fintech credit market, big tech credit volumes there are relatively small, the BIS paper says, at least compared with the US economy’s deep credit markets.

"While the United States is home to many of the largest big tech companies in the world, only Amazon engaged in any significant lending in 2018, to the tune of roughly US$1 billion, according to public reporting."

Meanwhile the paper says fintech and big tech credit are more developed in countries with higher GDP per capita, but at a declining rate. Additionally these alternative forms of credit are larger where banking mark-ups are higher and where banking regulation is less stringent.

"Regulation and, to a lesser extent, mark-ups are particularly important for fintech credit. Fintech credit is also more prevalent where there are fewer bank branches per capita. We also find that fintech and big tech credit are more developed where ease of doing business is greater, investor protection disclosure and the efficiency of the judicial system are more advanced, the bank credit-to-deposit ratio is lower, and where bond and equity markets are more developed. Overall, these alternative forms of credit seem to complement more traditional credit markets, rather than substitute for them," the paper says.

"Moreover, as credit has grown rapidly, there is the potential for individual borrowers to become over indebted, and – as in past periods of rapid credit growth – even for risks to financial stability. Whether this growth represents the natural diffusion of a promising new type of intermediation or a credit bubble remains an open question; it may be possible to assess this only after the economy has undergone stressed conditions," the BIS paper says.

Against this backdrop the economic shock from the Covid-19 pandemic is touted as representing a test for fintech and big tech credit.

"First, on a very basic level, the reduced physical mobility and social distancing during the pandemic have encouraged online communication channels. Thus, the use of online interfaces to originate and service loans could make both fintech and big tech lending more attractive relative to brick-and-mortar financial institutions. Second, the pandemic has benefited e-commerce and online economic activities, while hurting activities that rely on physical location. This may accelerate certain more general trends toward digitalisation, and may even give big tech firms greater margins in their core businesses (e-commerce, social media, advertising, gaming, telecommunication etc.)."

"Finally, the shock marks the first economic downturn that many fintech and big tech lenders have undergone, and it is thus a test of the resilience of their credit scoring models under stress. Evidence from a 2017 regulatory shock in China suggests that models with alternative data and machine learning may outperform traditional data in predicting distress after a shock. Yet it is also plausible that machine learning models that use short periods of historical data may perform worse, or that this may differ across different markets. Big tech firms, which have a more diversified range of business lines and fund loans either through their own balance sheet or financial institution partners, may have greater capacity to absorb credit losses and continue lending than fintech credit platforms, which are focused solely on financial services and must continue appealing to investors," the paper says.

"Big tech credit may also be less correlated with collateral values. Regardless of the impact of the current shock, there is a need to ensure that authorities and researchers have the proper data to monitor and study fintech and big tech credit platforms. Authorities with a mandate for guaranteeing financial stability should not have to 'fly blind' or rely exclusively on non-official data sources; they should have access to timely and accurate information about fintech and big tech credit in their own economy and economies around the world. We hope with this paper to make a small contribution toward this goal. Complementary efforts to bring fintech and big tech lenders into the fold of official regulatory reporting should continue apace."

The big tech credit data was collected from contacts at central banks and big tech firms, and from a variety of publicly available sources including under agreements to keep company-specific figures confidential. The authors say because most big tech firms don't report their lending flows by country and year, and many do not even file annual reports, they've had to rely on partial information and assumptions in some cases.

The Swiss-based BIS is the central banks' bank. 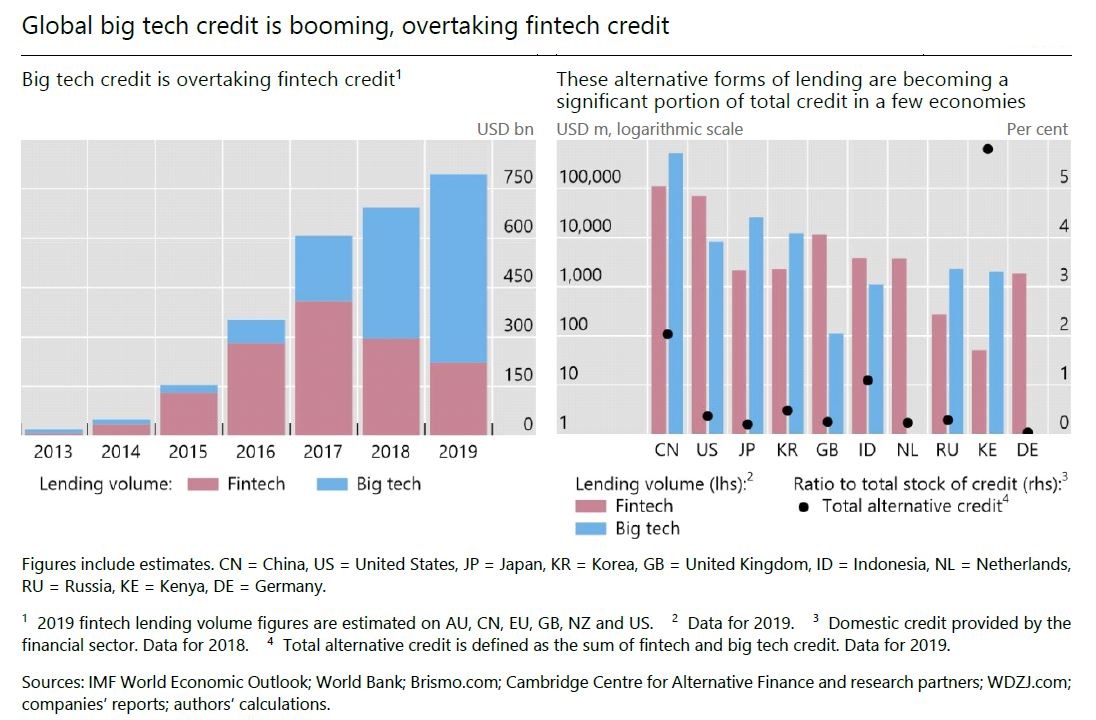 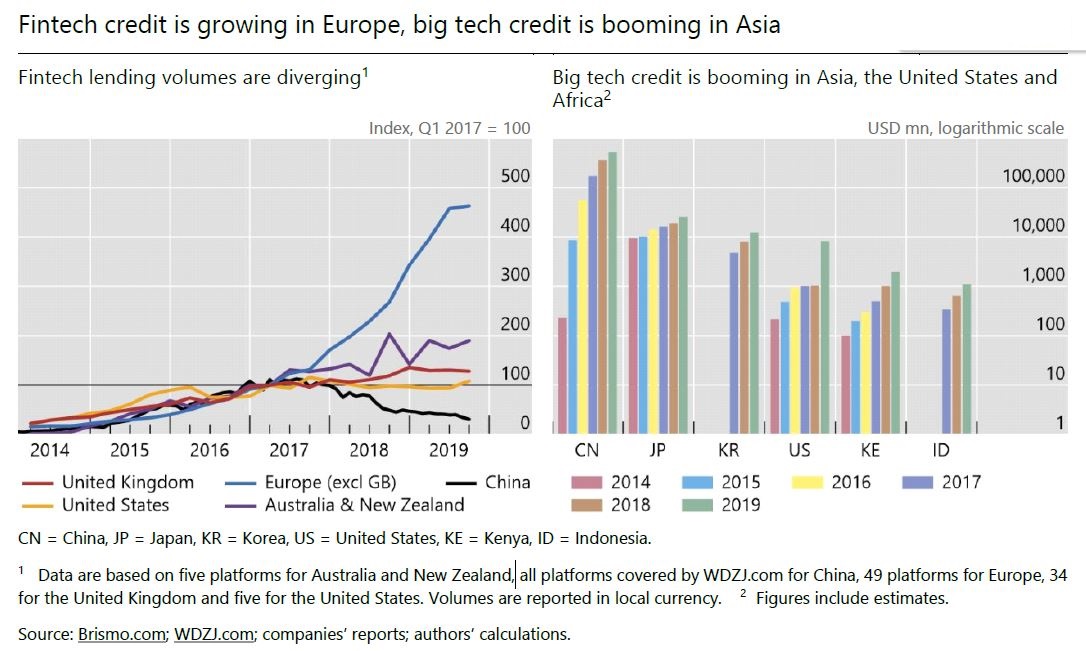