Grant Robertson commits to increasing the amount of money allocated towards new operational and capital expenditure in next Thursday's Budget, all the while reducing debt faster than planned

Grant Robertson commits to increasing the amount of money allocated towards new operational and capital expenditure in next Thursday's Budget, all the while reducing debt faster than planned 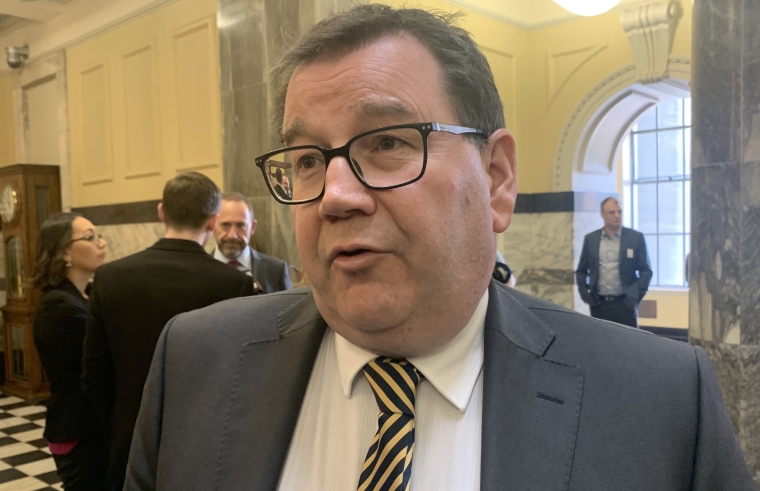 The May 20 Budget will include extensions to both the Government’s operating and capital allowances from levels forecast at the Budget Policy Statement in February.

So, new expenditure on day-to-day costs like public sector wages, NZ Superannuation and welfare will be higher in the year to June 2022 than the $2.625 billion forecast in February.

Meanwhile new capital expenditure on the likes of infrastructure will be higher than the $7.8 billion over four years forecast in February.

But speaking at an event hosted by BNZ on Monday morning, Robertson again reiterated he would take a “balanced” approach, so expected debt to fall as well.

Because the economy is weathering the COVID-19 storm better than expected, Robertson believes debt can be paid down faster than previously thought.

The Treasury’s Debt Management Office has over the course of the past year been decreasing its forecast bond issuance programme.

In May last year, it forecast it would issue $40 billion of New Zealand Government Bonds in the year to June 2022. In December it reduced this forecast down to $30 billion.

Bond traders expect the Debt Management Office to reduce this forecast again at the May 20 Budget.

The Government has been borrowing at a faster rate than it has been spending, so as at March, it had $42 billion of unspent borrowings sitting in its Crown Settlement Account with the Reserve Bank.

Robertson didn’t on Monday indicate how much he expected debt to reduce by over time. Nor did he put a figure on how much he planned to extend operating and capital allowances by.

He toed a fine line in his speech between trying to please those after more government spending on welfare, health, housing, etc, and those seeking prudence.

“[T]his Government will not implement austerity measures in order to try to reduce our levels of debt before the recovery is secure. In my view, the record of such policies is clear,” Robertson said.

“Our better-than-expected economic recovery does provide us with more options. There will be a careful balance here too.

“There is a bit more space in our operating and capital allowances to support the recovery in line with the approach that I have outlined today - focused on the areas of where we can accelerate progress and in tackling our long-term challenges.

“At the same time there is some more scope to keep a lid on debt and look towards a faster reduction in that debt once the recovery is secure.”

of course he is reducing the debt faster - does not make him great with money -- just points out the fact that despite the lockdowns being short -- he continued to borrow money we did not need - hence 40Billion sitting in our current account that we are paying interest on! He needs to spend more to avoid having this money sitting there reminding the world how wrong he and Orr have got it -- and how slow they have been to put the brake on borrowing more

How would Mr Orr have managed to do so much QE with 40 billion less debit issued?

new expenditure on day-to-day costs like public sector wages, NZ Superannuation and welfare will be higher in the year to June 2022 than the $2.625 billion forecast in February

With public sector pay freezes, I guess most of those increases are 'forecasted' to flow to welfare recipients. Can't say I am surprised!

Neither am I, those motels are not cheap.

The people staying at the ones in Rotorua eat at Valentines every night I am told, and it’s always packed. All on the taxpayer of course.

Why on earth would anyone go and work in Orchards for example? What would be the motivation for someone who is essentially on vacation to go and do the hard labour?

Contributing to the next to be declared obesity emergency.

Another reason for Mr Orr to delay action till 26th May is to hide behind budget noise as is hell bent on not targeting speculators.

Mr Robertson has to act as Mr Orr has made it a personal issue and prestige to not act against investors and trying all trick to defelect, so it comes to people voted to checkmate him just like they did to national party at the time of foreign buyer ban.

Mr Orr is pursuing his own personal will but elected representative has to follow........

He can’t say how much he expects to reduce debt by. It’s all just propaganda really, not one will hold him to account in the media.

How about zero interest loans from Callaghan for Capex for SME's in essential businesses, such as manufacturing?

This is a good idea. I wonder if the current productivity is also limited by our human resourcing at the moment, trying to hire IT staff is very hard for example.

Comparisons to other counties are fraught with problems.

95% of our businesses employ 10 or less. Many cant justify a big investment when they're struggling day to day. Its hard to drop 1/2 a person say especially with all the extra leave thats been legislated. Also many are kot busy enough to see any return on that investment.

95% of our businesses employ 10 or less. Many cant justify a big investment when they're struggling day to day.

I think that's one of the reason why that they don't want the property ponzi to collapse. It would wreak havoc on SMEs.

When you're that far out with your estimates/ budgets it indictates you did a poor job compiling them in the first place.

Most of the companies I follow completely withdrew guidance last year because there were so many unknowns. I would find it incredible if any forecast made a year ago was accurate, certainly not many expected NZ to perform as well as we have both economically and in dealing with Covid.

I would cut them a little slack in this instance.

Government bonds for funding are well understood to be an unnecessary, vestigial custom for currency-issuers.* There has been discussion of eliminating them as they serve no funding purpose.
An argument in favor of eliminating bonds is that they are the foundation for the widely held yet false belief that a “national debt” limits what public projects can be carried out. Eliminate bonds associated with “funding” and we achieve a more transparent, easy-to-understand system with no “national debt” for the media to discuss. This in turn enables the media and public to see the logic in optimizing spending up to the public’s own desired resource use for their own wellbeing (healthcare, education, a job guarantee) and in turn electing representatives who will do so. https://clintballinger.wordpress.com/2018/11/13/decouple-spending-from-…

The chance of this government reducing debt is about the same odds as winning power ball!
This government has only made life harder for the very people suppling the money to these clowns.
You can only squeeze the workers and business operators so far.

We all need to have a better understanding of how our monetary system operates, what we are told at present is nothing short of brainwashing. People are led to believe that budget surpluses are a sign of good government and they have no understanding how damaging they actually are to our country's welfare. Nothing is said about our high levels of household debt which is what we should be worried about.

A terrific way to keep people poor and dependent- on the government.

When does the MMT start to kick in?

The part when you let inflation increase and then increase tax(es) to stabilise price inflation then tax revenues increase.

Then spend that increase of tax revenues on paying down debt and increase social spending too.