Have your say: Mortgagee listings up 20% over November; sales hit new high in September

Have your say: Mortgagee listings up 20% over November; sales hit new high in September

Figures released over the weekend by Terralink International show mortgagee sales rose to a new high of 343 in September from 241 in August. September sales were up from the previous high of 321 in July. Mortgagee listings have also been rising in recent weeks, according to data supplied to interest.co.nz from realestate.co.nz. There were 379 residential and lifestyle property mortgagee listings on realestate.co.nz at the week beginning November 22, which is the highest since 385 at the week beginning August 2. Listings are up from 303 at the end of October and their recent low of 291 in mid-September. Over the three weeks of November, mortgagee listings on realestate.co.nz rose by 20% from 315 on November 1. "The key change in the structure of sales (in September 2009 from a year ago) is the shift from the sales being predominantly in the major centers to provisional NZ," Terralink said. The chart below shows the regional breakdown of sales in both September 2008 and 2009: Your view? Will the rise in mortgagee listings over November have any effect on house prices and sales in the final months of the year? How will the property market finish off 2009 2010? 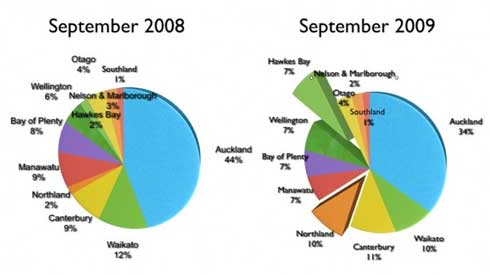