The spring impact on the housing market "clearly showed" as the number of new listings on property website realestate.co.nz jumped 19% in September from August, CEO Alistair Helm said. Asking prices were also up 6% from August. "As the economy slowly recovers from the impact of the recession, it appears sellers are more confident that buyers will be active in the market and willing to engage at a market rate for their property," Helm said. "While we always expect an increase in both the number of listings and the price expectations during the spring/summer period, this relatively large jump on both figures is a strong indicator of improved health in the property market," he said. "The anticipated seasonal lift in new listings coming onto the market as measured by the website occurred in September at a level ahead of expectations."

Realestate.co.nz lists over 90% of all listings marketed by real estate agents. There were 12,674 new listings on the site during September, 6% above September last year. "The year on year growth of 6% represents the first month since April 2008 when inventory coming onto the market has been ahead of the prior year "“ such has been the subdued state of the market," Helm said. "A large component in this rise in listings can be attributable to 3 main north island centers "“ Auckland, Northland and Bay of Plenty "“ these accounted for 55% of the overall increase of 2,030 in new listings in the month," he said. "Coincidentally they were also areas showing strong rises in asking price expectation. This data supports the view that the property marketing is most active in the major metropolitan areas whereas the provincial parts of the country are yet to witness this pick up." "Accompanying this increase of new listings has been a rise in the asking price expectations "“ up 6% on the month of August and up 5% on the prior 3 month average. This spike now takes the asking price expectation back to within 2% of the peak of the market in late 2007." The truncated mean asking price for homes, apartments and lifestyle properties added in September was NZ$419,851. The mean price for homes rose 4.5% from August to NZ$405,168 in September. Inventory levels, measured by weeks of stock of unsold properties, also rose nationally in September to 33.7 weeks stock of unsold properties from 32.6 weeks in August. "The level of inventory though is down 40% from the peak of the market back in February of this year when the level reached 57 weeks," Helm said. 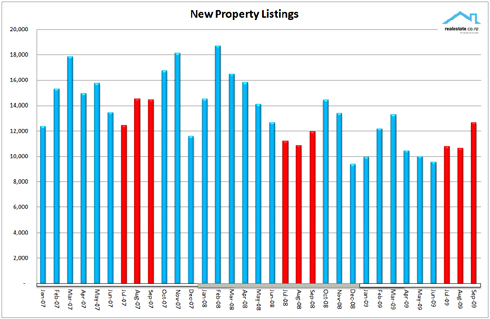