Have your say: Is the housing market picking up momentum?

Have your say: Is the housing market picking up momentum?

23rd Sep 09, 12:40pm
by Alex Tarrant
New Zealand's housing market picked up momentum in August, the Mike Pero Mortgages-Infometrics Property Cycle Indicator shows. The indicator is based on changes in three Real Estate Institute of New Zealand (REINZ) figures: Days to sell, median sale price and number of house sales. The Property Cycle Indicator runs from minus 10 to plus 10 and recorded 6.68 in August, from 5.93 in July. Mike Pero Mortgages Chief Executive Shaun Riley said the rate of turnover in the housing market was the fastest in almost two years. "In August houses took on average 34 days to sell (21 days fewer than in August 2008) and three days better than the 37 days taken in July 2009 (24 days fewer than in July 2008)." "The reduction in the time taken for houses to sell, when compared with a year earlier, is the fastest improvement since records began in 1991." "The Mike Pero Mortgages-Infometrics Property Cycle Indicator climbed to a positive 6.68 in August, from 5.93 in July." "The median house price also rose year-on-year in August, up 5.1 per cent to $346,750, the first annual rise since March 2008 and the largest increase in 21 months." "The third measure of the Property Cycle Indicator, the number of houses sold, was up 39 per cent on a year earlier, and stable month-on-month." "The big markets of Auckland and Wellington are showing strong signals and are leading the market according to the Property Cycle Indicator." "Wellington led the country with a PCI of 7.80 (from 6.57 in July) and Auckland not far behind with a PCI of 7.52 (from 6.92 in July)." "In the South Island the Canterbury/Westland's PCI was 4.78 (edging up from 4.49 in July), Otago's was 2.60 (2.22), and Nelson/Marlborough's was 2.90 (from 2.07)." Here is a link to all of our real estate charts. What do you think? Is a pick up in housing market momentum sustainable? How much of a boost will the 'spring selling season' bring to the market? We welcome your comments below. 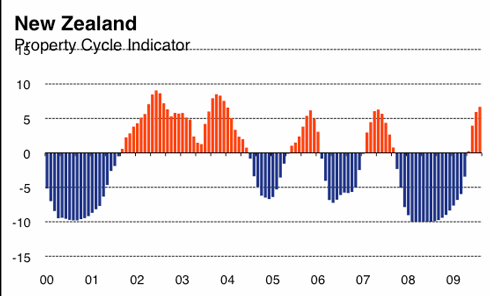