Here's my top 10 links from around the internet in the last few hours. I'm a big fan of KAL in the Economist. Here is a cracker that captures the mood. A lot of people are going to make fortunes from the government spendups going on right now and they won't be regular taxpayers. 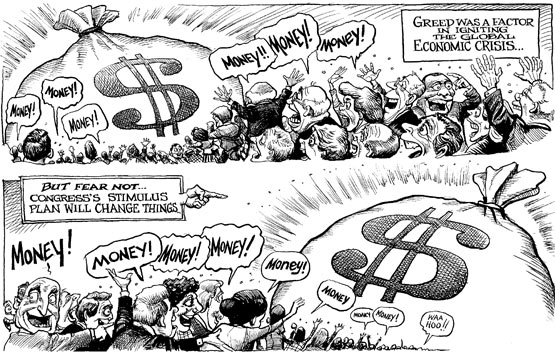 'Unimaginable contraction' Japan's corporate bankruptcies rose 16% in January as Nissan announced 20,000 job cuts and said it would ask for government aid. The Japanese economy is cratering as export demand dries up in the face of a strong yen and shrivelling US demand for cars and consumer goods. This in FT.com gives a taste. The Bank of Japan's chief economist warned overnight of an "unimaginable" contraction in Japanese output in the December quarter. Economists are saying Japanese GDP fell at an annualised rate of 11.7% in the December. If that is continued for a year or two we are talking of a depression. This in Gloomberg as some call it now. Bond yields rising Bloomberg also reports (it says exclusively) that the Federal Reserve is divided over whether to print money by buying back US Treasury bonds or to print money by buying US mortgage debt and US commercial paper. Bond yields have risen around  over the last week, with the 10 year yield rising to 3% and the 30 year to 3.7%. This issue of when and if the Fed starts buying treasuries is crucial.

Ominously frozen again UK and US money markets are back to their frozen state of shortly after the Lehman collapse, says the world's biggest money broker ICAP. "End-January and early February have seen a return toward conditions reminiscent of the period post Lehman's collapse," ICAP strategist Don Smith said in this report Not so AAA any more Nouriel Roubini says America's AAA credit rating may be downgraded and he has compared Britain's loss of reserve currency status during the second world war to America's current problems. He is now worried about a Japanese-style L shaped recession and that some countries could default because their nationalised banks are too big to save. He says the US banking system is insolvent and large parts of the UK system are insolvent too. A fantastic read in FT.com. You do have to register but it's free. Here's a taste of his earthshaking stuff.

The US is now the largest net borrower in the world (running huge current account deficits) and the largest net debtor in the world while its domestic fiscal deficits are surging too. And unlike the 1980s when the US twin deficits were financed by the its friends and allies (Japan, Germany and the rest of the EU) this time around the largest lenders and creditors of the US are either its strategic rivals (Russia, China, etc.) or a bunch or relatively unstable petro-states. So this balance of financial terror makes the US vulnerable to the kindness of strangers. This growing weakness of the US suggests a paradigm shift in the economic and financial "“ and eventually even geostrategic - power balance of the world.

Our tight employment market Matt Nolan at TVHE has a nice close look at the latest New Zealand employment figures and finds our market is still tight and the surprising rise in employment was no fluke. I agree here. There's a lot more job hoarding going on than many think and I continue to shake my head that we have an OCR at 3.5% (and falling) while employment is still growing and unemployment is under 5%. If it wasn't for the big participation rate rise, we may even have seen a stable unemployment rate in December. Euro grief Ambrose at the Torygraph is no fan of the euro, but he's picked up on some tension within the Euro. The profligate southern Europeans would love some form of joint government bond issue so they can ride the low interest rate and less profligate coat tails of the Germans. A summit is likely. Hooray. European pollies talking. In English (!) All good fun for those cheering on the demise of the euro. I'm no fan either, but I do wonder who will have the reserve currency if the Dollar collapses. The Japanese? The Chinese? It certainly won't be the Brits.  Do we really trust Barclays? Robert Peston at the BBC makes some nice points about the size of Barclays' balance sheet (bigger than the UK economy) and its vulnerability to derivatives markets. Well worth a read for Barclays sceptics after last night's apparently better than expected result. I don't buy it. Dr Doom and the Black Swan Nouriel Roubini and Nassim Taleb (the guy who wrote 'The Black Swan') talk on CNBC. Hattip to Calculated Risk. Taleb reckons Bernanke should be sacked. Roubini restates that US banks must be nationalised now. The Credit Crunch is not over, by the way. When will the Fed strike? Bill Gross at Pimco, who is usually worth listening to, reckons the Federal Reserve will move to cap US mortgage rates at 4.5%, which would mean the Federal Reserve would have to jump in and buy mortgage bonds and Treasuries at some point in a big way (ie print so much money people will wonder about the US dollar's reserve status). Here's Gross at CNBC.

"I think at some point we're going to see a 4.5 percent mortgage rate and the 10-year Treasury rate capped at some level. When the Fed comes in to buy Treasurys that will be a big day," Bill Gross told CNBC.

Calculated Risk has some interesting analysis on how far the US 10 year would have to fall to see US mortgage rates capped at 4.5%. He reckons around 2.3%, which is well below the 3% we have now. That will be some Fed spending spree when it starts.