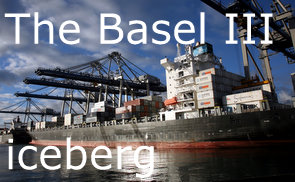 New Zealand exporters face a major increase in the cost of trade finance if proposals in the latest round of global banking reform, known as Basel III, are left unchanged.

John Scott, New Zealand general manager of credit reporting agency Dun & Bradstreet, told interest.co.nz this was an unintended consequence of global banking regulators' efforts to stop systematic failure of the banking sector in the wake of the global financial crisis.

Scott said new capital ratio buffers in the Basel III regulations would apply to traditional trade finance facilities that fund about 30% of world trade. That's because Basel III defines these facilities, such as as letters of credit, as off balance sheet items and will require their risk weighting to increase to 100% from 20%. That means banks' capital buffers for such asset backed loans will have to increase five-fold, Dun and Bradstreet maintains.

Scott said banks engaging in trade finance are likely to either pass this increased cost onto their customers or divert these funds to other more profitable activities, reducing their trade credit exposure and restricting access to letters of credit, which  are commitments by a bank on behalf of the buyer that payment will be made to the exporter provided the terms and conditions have been met, as verified through the presentation of all required documents. The buyer pays its bank to provide this service.

Other forms of trade finance can include trade credit insurance and export factoring. Trade finance was worth about US$750 billion in the first quarter of 2010, according to Dun & Bradstreet.

Scott said letters of credit have underlying collateral and detailed documentation and have traditionally been regarded as low risk products. The reforms should recognise that trade finance instruments are physical instruments with real value. Otherwise trade financing conditions were likely to deteriorate for most companies, as they wouldn't be able to access cheap credit, especially those exporting to emerging markets where letters of credit are the main way of securing payment.

"If the proposals remain it is expected that firms will take on more of this funding role themselves by increasing their exposure to open accounts where customers are permitted to make payment for goods or services at some time after delivery,"  said Scott.

He said the news was particularly bad for New Zealand because our economy, and exporters, are dominated by small firms. More than 90% of New Zealand firms employ less than 20 people and sell less than NZ$10 million worth of goods and services per year with a significant portion of their trade with the Asia-Pacific.

"As a result New Zealand firms exposed to these delinquent payers are already a higher risk than average of experiencing financial distress over the next 12 months," said Scott.

Scott suggested that a couple of years ago letters of credit would probably have been used by exporters to finance anywhere between 10% and 25% of a deal, whereas now they might be used for up to 100%, making it almost a straight cash transaction.

"So if they (the regulators) could actually recognize it as being a physical instrument, which has value, then they can rebase the levels of which they’re prepared to fund the balance sheet," said Scott.

If you’re talking about normal levels of funding between normal counter parties, Scott said trade finance should be considered a part of doing business rather than a high risk instrument.

"Trade bills are supported by underlying transactions and goods that can be identified," said Scott. "So it’s not actually the same thing (as most other off balance sheet items). Even though technically it might be judged as such, it’s not because it’s backed by physical goods rather than being a synthetic creation of some kind of derivative desk," said Scott.

'Global trade may dry up'

He noted a lack of trade finance was a major contributor to the sharp contraction in world trade during the global financial crisis, when liquidity dried up, and global banking regulators needed to ensure they didn't create similar circumstances that weaken global trade again. In late 2008 and early 2009 Japan, for example, saw huge falls in its exports because people "stopped buying literally overnight."

"As a result of this what you’re going to see is new growth companies that are the ones you really want to encourage and nurture, are not going to have the capital base to take on additional risk so that is going to restrain their growth," said Scott.

"The ability to grow quickly will be restrained because there will be an additional cost of doing business and if it (Basel III) doesn’t change, the letters of credit or other such instruments will be funded by the company themselves," Scott said.

"They will take on more of the risk. So effectively their capital is tied up so they can’t redeploy it into investing and growth and also they are potentially more exposed to single traumatic events from some of the counterparties they’re dealing with."

Governor Alan Bollard said the Reserve Bank is monitoring the Basel III initiatives. Bollard says the central bank expects to adopt the bulk of the reforms, particularly those around the strengthening of bank capital buffers.

"However, measures will not be adopted if they are ill-suited to New Zealand conditions,” Bollard says.

He notes that although the reforms are expected to be largely finalised by the end of 2010, new measures would be introduced over a long phase-in period covering several years. The Basel III reforms are due to be presented to the G20 Leaders summit in Seoul in November.

Meanwhile, Scott said the impact of the banking reforms was one reason why Dun & Bradstreet has a subdued outlook for world growth.

The company expects the global economy to progressively slow through the second half of 2010 and into 2011 due to slowing world trade, high unemployment levels and ongoing volatility. Dun & Bradstreet is forecasting 3% global growth in 2010 and 2.7% next year. It also expects the Basel III regulations to see larger banks take market share from smaller rivals, with the latter likely to have to reduce lending to increase capital buffers.

"If the big banks chose not to fill this gap then trade finance will deteriorate further," Scott said. "As a consequence many exporters may look to other more expensive products such as overdrafts and factoring to fund their interenational operations."

This will require more focus on risk management including both company and country risk analysis, said Scott.

"However, measures will not be adopted if they are ill-suited to New Zealand conditions,” Bollard says

Noddyland will do what's good for banks in Noddy. The rest of the financial thieving world will obey the rules....what a load of crap. If Bolly is saying Basel3 rules can be bent ...then they are pure rubbish...spin....garbage.