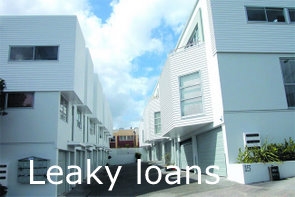 The government may cover between 15% and 25% of any shortfalls from defaulted bank loans given for the repair of leaky homes under a financial assistance package, with banks then having to take on the remaining risk.

Under the proposed legislation, banks, central government, and in some cases local government, are set to share the costs of any financial assistance package offered for around 23,500 dwellings that would fall under the Act. Many more dwellings are affected by the leaky home problem, but fall outside a 10-year liability limit contained in the draft legislation.

For more on the number of houses affected and the percieved costs, see Gareth Vaughan's February 17 article here.

Central government has said it would stump up with 25% of repair costs, while local government would provide another 25% if the respective council signed off consent for the building work. It is expected home owners would then borrow the other 50% or 75% of the costs from a bank.

However, discussions between government and the banks hit a sticking point over the issue of who bore the costs of any defaults on the bank loans, with banks so far unwilling to take the full hit themselves. In a written submission to the select committee two weeks ago, the Bankers Association talked about the need for the legislation to refer to a loss sharing agreement between banks and the government.

In an oral submission to the select committee on Thursday, NZBA CEO Sarah Mehrtens said the Association wanted to clarify the nature of any credit support offered by the government.

"The credit support which is being offered to banks to support its customers has been represented publicly as a “Crown guarantee”. People commonly perceive a guarantee as being given by someone who, in effect, stands in the shoes of a borrower in case of default. To avoid confusion and unrealistic expectations, we think it is important that consumers know that a guarantee of this nature is not being offered by the Government," Mehrtens said.

"What the Government is offering is to enter into a loss sharing agreement with the Banks in relation to any amounts which are lent to fund the approved cost of leaky home repairs. This means that, in the event of a default, Government should contribute a proportion of any shortfall," she said.

"We note here that the credit support is provided in relation to the repair loan amount and not the total amount a customer has borrowed. While we cannot give the Committee exact figures, we expect the credit support extended by the Crown might cover 15 to 25 per cent of any shortfall on the repair loan. The remaining 75 to 85 per cent would therefore represent the Bank’s risk."

There was one other important feature of the credit support arrangement the Association thought it was important the public understood:

"Typically, in cases where there is third party support for the advance of credit, one would expect that lenders might be able to lend more than they otherwise would have, or perhaps lend in circumstances where they perhaps otherwise would not have. If this were the case, one might reasonably assume that Banks could pass on any benefit of a credit support arrangement to its affected customers," Mehrtens said.

"However, the suggested terms of the loss sharing agreement preclude this. They require that the Banks continue to apply their standard lending criteria when processing a customer’s loan application to fund leaky home repairs. It is important to emphasise that this loss sharing agreement does not influence the Bank’s ability to lend money to its customers, nor does it relax the circumstances in which the Bank will lend," she said.

"So the Government’s credit support – of itself – will not make it easier for customers to access a loan from their bank to finance leaky home repairs. The potential benefit to customers with leaky homes comes from the combined direct contributions that they may receive from the Crown and territorial authorities.

"We make these comments because we wish to ensure that consumers understand what is being offered and what impact the financial assistance package might have on them. Our written submission suggests one way of clarifying any confusion around the arrangements and we will continue to work with officials to ensure that our member Banks’ customers, and the public in general, are well informed and able to benefit as best they can from the proposed financial assistance package," Mehrtens said.

Government motto: "We must do everything possible for the banks and big monopoly businesses so they can continue to screw over the taxpayer from birth to death while we take our cut ".

It just might be easier to establish what the taxpayer is not bailing out these days.....anyone taken some losses on the pokies recently?

And when I say taxpayer I mean the last vestige of the productive and responsible who are crazy enough to believe there is still hope for this crony socio-capitalism whatever and aren't on some rort, LAQC tax dodge, commission gravy train, grant, or any other back door benefit, banker backstop or rentier class entitlement funride.

I'm sure the IMF are going to rubbing their hands in glee at our predicament and placing their orders for strategic assets and austerity measures due for us soon.

Taxpayers won't bail anyone out here. This Bill won't be introduced until there are so few leaky homes that qualify that the costs will be minimal.  There will be more taxpayer's money wasted on pollies wages for the endless hours of useless meetings and paper-shuffling.  The poor leaky homeowners are well down the pecking order here, make no mistake.

The most disgusting aspect of this whole fiasco is how easy it is for politicians (Williamson is the key figure) to think they have a right to pledge our tax money to banks.  That is truly shocking!

As a logical trade-off, of course it would be too much for Govt to ask for a slice of the profit the banks will make from the successful loans.  It's important to the banks that NZ taxpayers wear plenty of risk, but do not under any circumstances benefit from the spoils.

Add this banking benefit bonanza building binge to the Chch feast and guess where the building materials, labour costs, council fees and contract costs will go...plus gst of course!

Then consider the inflation is to be funded with council rates, govt  foreign loans and not to forget the banks creating  "mouse credit"......

Yes you are paying the rates...and the taxes....and you get to guarantee a fat 25% of any bank losses .....BUT you get nothing from any bank profits...not even corporate tax because the bastards will sidestep that.

So you are about to hand over more of your earnings to pay for rampant inflation that means you will not be able to afford to build without a gargantuan fat bloated bank mortgage....hahahahahahahaaaaaaaaaa

Q: what's the difference between Santa and NZ Govt?

A: Nothing, they both bear gifts... on other people expenses

Aren't people mising something here?  Surely a bank doesn't have to accept any loan deal to fix a leaky home.  If  the government decrees that home owners have to pay for 50% or 75% of costs and many  can only do this by getting a loan from a bank, why should a bank be expected to carry the complete risk of default, easier for the bank to simply decline the loan request.  So if the government wants to advance this proposal it will need to give the banks some back up.

If I was a NZ bank I would be very careful before lending money on ANY NZ home - the skills of the large majority of NZ builders, and the average quality of NZ houses, is appalling: it is simply 3rd world standards. And this applies to all types of contruction and not just to the so-called leaky homes, but to lots of newer as well as older homes.

I have been all over the world (including some developing countries) and I can tell you that the worst, when it comes to the building industry, is NZ. Unfortunately this is a lose-lose situation: regardless of who is going to pay for this, this makes everybody poorer - it is a hit to the whole economy. I feel for the home owners but I also partially blame the average NZ consumer who has been accepting poor quality houses (built with the "good enough" concept).