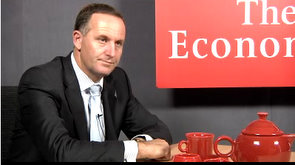 Prime Minister John Key was interviewed having tea with The Economist.

The government has essentially promised international credit rating agency Standard & Poor's that it will not allow net debt to rise above 30% of Gross Domestic Product, Prime Minister John Key says.

Finance Minister Bill English is set to release a 'zero' budget next Thursday that shows no increase in overall government spending from last year as government tries to control spending in the face of a possible credit rating downgrade. The government has acknowledged credit rating agencies are looking at the rise in public debt alongside New Zealand's already high private sector debt.

Key's comment came in an interview he gave in London last week to The Economist newspaper, which can be viewed online here.

In March, Finance Minister Bill English warned government's net debt could rise above 30% of GDP over the next three years as government dealt with the costs of paying for the Christchurch earthquakes and a slower than expected economic rebound in the second half of 2010. The government had set the 30% mark as a self-imposed comfort zone it would not like to go over. In December last year, the Prime Minister said Standard & Poor's would not take notice of a nation's net debt until it hit 30% of GDP.

Standard and Poor’s placed New Zealand’s AA+ credit rating on negative outlook in November, signaling a one in three chance of a ratings downgrade in the next two years. However, the move was mainly due to how S&P had revised the way it assessed private sector debt after the Euro debt crisis.

In The Economist interview last week, Key said the good news was the government's balance sheet was still "very strong" with net debt around 19% of GDP.

"We have essentially promised the rating agencies that debt won’t rise above 30% of GDP, and it’s our intention to keep to that commitment," Key told The Economist

“We’re going into this budget on May 19 with the expectation that it will be a ‘zero budget’ – so no new increase in expenditure - and that is all part of insuring that not only we don’t breach our self-enforced debt targets, but also that over time we return to surplus quicker than we otherwise would, and that we start preparing the ground for...strong economic growth," Key said.

"So we’ve been reforming most parts of the economy that will drive economic growth and lift productivity, whether it’s labour market reform, taxation, investment in infrastructure or skills, and we’re continuing to work very aggressively on that,” he said.

The issue for Standard and Poor’s in putting New Zealand on negative outlook was all based on the rating agency's view about the total indebtedness of the New Zealand economy.

“What is true is that we have total indebtedness of about 85% of GDP, primarily made up because of private sector debt. The government can’t control that, although it can do things to encourage a lift in national savings, and in the budget you’ll see a number of initiatives to try and achieve that," Key said.

“Overall, we made some changes in 2010 which we also believe would lift national savings, including increasing our consumption tax and reducing personal taxation to give people more incentives to work and to save. We’ve also [been] reducing taxation on savings, and we’ve been discouraging savings in the housing area by eliminating depreciation claims and the likes," he said.

“But longer-term, that lift in national savings has to occur on the private sector side, and that is all part of the rebalancing of the economy to be much more export focussed and much more outward focussed.”

Key accepted it was highly unusual for a government to run a 'zero budget' in election year.

"Most governments go into election year offering promises of more spending and lollies, and giveaways in different areas, and our view is that we want to have a mature conversation with the New Zealand public," Key said.

"We believe that they do understand that New Zealand needs to cut its cloth to the environment it finds itself in, that lumping further debt on future generations is not acceptable. That the earthquake does actually have to be paid for," he said.

One of the reasons the government believed New Zealanders were ready to accept the measures that are going to be implemented was the government's tightening actions could be reflected in peoples' own patterns of behaviour.

“From the period of about 2000 to 2008, what we saw was that New Zealanders were spending far more than they were earning – about NZ$1.15 for every NZ$1 they earned. In the last two-and-a-half years they’ve been spending 90 cents for every dollar they’ve earned," Key said.

Paying for the quake

Meanwhile Key hinted that increases in budget spending may not be as big in current years as the National government's previous two budgets, or those seen under the former Labour government. This would be due to the costs of paying for the Christchurch earthquakes, as the government looked to get its budget back to surplus over the next few years in order to start repaying debt.

“We think there’s around about NZ$15 billion worth of either insurance or savings that we’ve put aside for an earthquake. That’s the good news part of the story," Key said when asked about the costs of the quakes that hit Christchurch on September 4 last year, and February 22 this this year.

"The bad news is we think the liability for rebuilding infrastructure and housing is in the order of NZ$20 to NZ$25 billion, so there’s a shortfall of NZ$5 to NZ$10 billion," Key said.

"By going into the budget with a zero budget, we’re essentially not spending the billion-odd dollars extra that we would spend. Now, because that reoccurs on every single year, over a period of about probably seven to ten years, you’ve effectively paid for the earthquake,” Key said.

A spokesperson later confirmed to interest.co.nz that Key was not suggesting 'zero budgets' for the next ten years, but that, if that were to happen, it would have effectively covered the government's costs for the earthquakes.

NZ is just more more disaster away from total financial ruin, and who knows when or where in the world the next black swan will come from, but you can guarantee it will come and we are not prepared.  In many respects John and Bill have run the economy no differently from the way AMI was run as a business, risky and ultimately irresponsible at best.

But like all "good" governments (I use the word good as in being good at being deceptive), they have managed to fool the mass general public by directing debate away from core issues. Token 'cuts' to expenditure have been made, but nothing substantial. Meanwhile falling tax revenue confiscated from the declining private sector is being suplimented by huge borrowing without any concern as to how we are going to repay it.   John doesn't have to worry though as he can leave the sinking ship for Hawaii at any time with his millions, and leave the mess to someone else to clean up.

Without total reform, our economy will continue to slide further down the OECD until the last country on the list will be us. And from there we will be relegated to the 2nd division.

John and Bill have kindly placed all our remaining chips on one final bet .. an "Export led recovery" .. their own chips are not on the table as they know full well that there is no payoff as any income gets soaked up by the banks and compounding interest repayments.  Currency devaluation will be the final nail in our coffin. Long gone are the days when kiwi's could afford a Queensland holiday, probably we will see a resurgence in holidays at home.

And all this for a moment of personal glory and fame and a chance to have "Prime Minister" on your CV. Thanks John for all you have done !!

Oh, one more thing.  If you are thinking of voting Labour; don't. They are even worse.

Loosen up Matt S at least our real wages are closing the gap with Oz (interview 8 mins in) ;-) ;-)

Neco, when he said "our wages", he was referring to just his and Bill's. !!

This real wages talk is bollocks. Is John refering to tax cuts closing the after tax wage gap. I dont he included the gst rise in his calculations lol. Plus the Aussies now pay no tax on their first 18 grand, pay only 4% of earnings on over 48 grand on student loans, get 9% super etc. He was doing his best to fudge the figures!!!!!!! Anyway only the wealthy got tax cuts.
Ofcourse cuting taxes for the wealthy rather that paying down debt passes the bill to our kids. Another reason for them to jump the ditch!