Fresh from revealing a pretax hit of A$301 million on complex securities linked to the United States subprime mortgage market meltdown, BNZ's parent National Australia Bank (NAB) is tipped by Citigroup analysts to write-off about A$870 million (NZ$1.1 billion) of shareholders' funds if it exits Britain.

The Citigroup Melbourne-based analysts - Craig Williams, Wes Nason and Andrew Minton - point out NAB has written off A$5 billion of shareholders' funds over the past decade, and this is likely to swell by another A$870 million if the bank exits its troubled British business.

NAB CEO Cameron Clyne announced in February a strategic review of the group's Glasgow headquartered Clydesdale Bank and Leeds headquartered Yorkshire Bank. Clyne said there were a "myriad of options" on the table for the review. NAB has owned a business in Britain for 25 years having acquired Clydesdale Bank in 1987 and added Yorkshire Bank in 1990.

The Citigroup analysts expect the review to result in an orderly run down of NAB's British commercial lending book and the eventual sales of its retail operations by 2014.

"NAB has written-off over A$5 billion of shareholders' funds (see table below) over the past decade, to which a UK exit would add A$870 million on our estimates," Citigroup says. 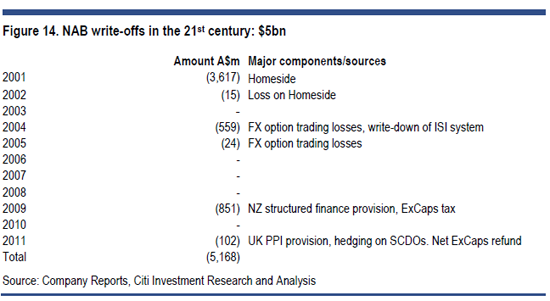 According to the Citigroup report, Clydesdale Bank has a £14 billion (NZ$27.2 billion) commercial loan book of which 31% of the loans are in the construction and property development sector, 25% in manufacturing and other commercial activity, and 15% in commercial real estate. Of the portfolio, 44% is in the north of England and 26% in Scotland.

"While UK commercial values were broadly flat during 2011, they have fallen 35% since the peak in 2007. Property derivative contracts are presently speculating on further falls of 10-15% by end 2014," Citigroup says.

"We estimate that NAB may require up to £500 million in additional provisioning (on top of the existing £112 million) in its UK commercial real estate book. We expect this may follow on from the current strategic review, with some element of a 'good bank, bad bank' put in place to manage the run off of commercial exposures."

Furthermore Citigroup notes a UK Financial Services Authority review last June suggested about 65% of British bank commercial real estate loans were in breach of covenants and half of these in negative equity.

"Already some £4 billion of Clydesdale's portfolio could be in forbearance (covenant breach) and of that £2 billion in negative equity if it were similar to that of other UK banks."

NAB's British operations also have £14 billion of home mortgages, or 1% of the British market, and 2% share of retail bank deposits. Citigroup suggests NAB will look to improve the retail business over the next two years until more potential buyers emerge, noting two deals announced in late 2011 - the Lloyds "Verde" branch divestment to preferred bidder Co-operative Group and the purchase of Northern Rock by Virgin Money - have proven difficult to get away and are still subject to "completion uncertainties."

"Given the difficulty in getting these two transactions to completion, we suspect that the sale of the much larger and much riskier Clydesdale Bank is not possible at the moment at anything approaching book value."

However, on a brighter note for NAB shareholders the Citigroup analysts suggest NAB's track record of shareholder funds write-offs will pressure management to return capital from a British exit rather than retain it for expansion elsewhere.

Meanwhile, NAB says it has extracted itself from the "economic risk" surrounding the last two of its Synthetic Colateralised Debt Obligations (SCDOs) - with a face value of A$600 million - in a move that will reduce its risk weighted assets by A$1.5 billion and cost A$301 million before tax.

Banking analysts at Deutsche Bank in Sydney James Freeman, Andrew Triggs and James Wang, say given NAB's original exposure on the SCDOs was A$1.5 billion and it has now spent A$760 million, excluding management time and mark-to-market movements: "This represents an effective loss rate of 50%."

"This SCDO has turned out to be a very expensive exercise for NAB shareholders."

A SCDO is a complex financial security used to speculate or manage the risk that an obligation will not be paid. It's a derivative, meaning its value is derived from events related to a defined set of reference securities that may or may not be owned by the parties involved. It's a form of collateralised debt obligation (CDO) in which the underlying credit exposures are taken on using a credit default swap rather than by having a vehicle buy assets such as bonds. See more on CDOs here, which were at the centre of the US subprime mortgage market crisis in 2007-08.

Twice in 2008 NAB took charges relating to a portfolio of 10 CDOs. Firstly, there was an A$181 million charge in its half-year results to March 31, 2008, and then an A$830 million provision in July 2008 that provisioned the portfolio to nearly 90%. NAB's then CEO John Stewart said the CDOs contained US residential mortgages and were held in international conduit facilities used to finance customers. Law firm Maurice Blackburn is leading a class action law suit from NAB shareholders seeking A$450 million after NAB shares shed 13.5% of their value on the day it revealed the A$830 million hit, and continued falling in following days.

Separately, last year a NAB spokeswoman told interest.co.nz, as fears over the Eurozone sovereign debt crisis mounted, that the bank no longer had exposure to about A$12.8 billion worth of Italian government bonds it had taken as collateral under a short-term funding arrangement with another un-named bank.