Casino operator SkyCity would need more than 350 extra gaming machines in return for building a NZ$350 million convention centre for the economics of the deal to work, an analyst says.

The government is in talks with SkyCity about the company building and paying for a NZ$350 million national convention centre in Auckland. The deal is set to lead to a law change that would allow SkyCity to increase the number of gaming machines it has in its flagship Auckland casino, which has been estimated in media reports to be in the range of 350-500 extra machines.

Prime Minister John Key and Economic Development Minister Stephen Joyce say the government and SkyCity are still in negotiations regarding the terms of the deal and will not comment on the possible number of new machines to be granted to SkyCity. However, Key yesterday said the 500 figure was not one the government had put in the public arena, indicating it may not be that high.

Goldman Sachs equity analyst Marcus Curley told interest.co.nz that the number of additional machines would need to be above 350 to enable the casino's shareholders an acceptable level of return on the NZ$350 million investment for the capital and the ongoing running costs stemming from construction of the centre.

"Combining initial revenues from greater gaming product and wider use of ticket-in ticket-out (TITO) or note acceptors could provide an initial return of about 8% on the NZ$350mn investment. This after-tax return should lift to an acceptable level (12%) once the national convention centre is open and SkyCity benefits from additional casino visitation and stronger hotel rates," Curley wrote in an analysis piece released last week.

"We view this as a fair outcome given the risks associated with lifting casino visitation. In particular, our estimated after-tax return would fall to 6% over the medium-term if there is no increase in casino visitation," he said.

"Limited details have been provided on potential regulatory concessions; however, the government has stated that the broad areas of negotiation are a proposed increase in tables and machines at Auckland Casino and an extension of its venue licence beyond its current date of 2021," he said.

"More recently, media reports (NZ Herald, February 2, 2012) have pointed to a potential increase in machine numbers at Auckland Casino between 350 and 500. Any proposed changes to gambling legislation would be subject to a full public submission process under the usual select committee process. We believe the incremental revenue from additional machines and tables will be critical in achieving an acceptable financial return on the convention centre project."

Curley told interest.co.nz that without an increase in machines, the number of people the convention centre would bring to the casino would create only a modest amount of revenue relative to the cost of building the centre, including operating costs, and the cost of capital.

“There’s no free lunch. No one’s going to give you money to put into an asset that doesn’t make a return.”

“When you properly look at returns analysis after allowing for the revenues, but also the cost of running the extra facilities, the cost of depreciation or replacement of those facilities, and the cost of the capital you’re investing, the economics are acceptable, but no more than that, in the first five years of investment," he said.

"For the smaller gaming expansion (+21% including 350 machines) at Auckland Casino, our top down and bottom-up analysis suggests an initial real unit revenue on incremental product some 35% to 45% below existing levels (NZ$343 per day and excluding GST in the 2012 financial year). Dilution expands to between 52% and 55% on the larger gaming expansion (+30% including 500 machines)," Curley said in his analysis.

"This implies incremental revenue from the gaming expansion of between NZ$37 million and NZ$46 million in the first full-year of operation. We believe unit gaming revenue should then slowly recover over time in line with underlying demand. In addition, there would be a further boost to gaming revenues when the national convention centre and car-parking opens. This analysis also excludes any potential boost to machine popularity and unit revenues from greater use of TITO or note acceptors," he said.

"Combining our revenue and margin analysis, we estimate incremental EBITDA from the gaming expansion of between NZ$23mn and NZ$28mn in the first full-year of operation," he said.

"Over the long-term, we believe SkyCity could achieve near its targeted after-tax return of around 15% with appropriate regulatory concessions. However, we see this is a fair outcome given this project is not risk free and does require a significant (and by no way guaranteed) lift in casino visitation to achieve an acceptable level of return. For example, our estimated after-tax return falls to a somewhat disappointing 6% over the medium-term if there is no increase in casino visitation," Curley said.

He maintains it's impossible to accurately value the convention centre project until the details on any agreement are disclosed.

"Instead, we would currently view this as an option over a potentially value accretive project. As a guide, our forecasts suggest SkyCity should earn an after-tax Return On Investment of 13% from existing assets over the next 5-years. This underpins SkyCity's current Enterprise value/capital employed of 1.8 times. The combination of regulatory concessions coupled with additional revenue sources could provide SkyCity with the ability to achieve a similar outcome from national investment centre investment over the long term," he said.

"In addition, investors are likely to place some value on any long-term licence extension at Auckland Casino which eliminates any risk and cost associated with the renewal process in 2021. These potential issues where highlighted with gambling licence changes for Victoria pubs and clubs and material licence extension payments for some Australian casinos. Short licence periods are also a material obstacle to industry consolidation, in our view." 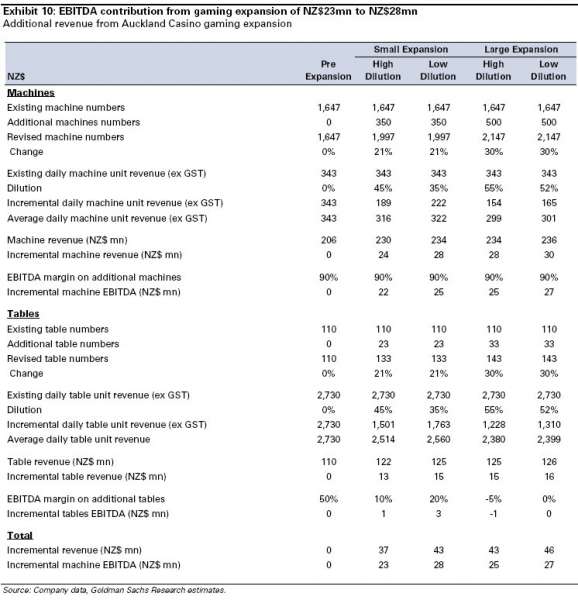 More gambling culture in New Zealand – with the support of the government - HA !

Is M. Curley an old mate of JK? Steven Joyce including the PM should be sacked.

$ 20 says you get more votes than the Count does !

You are commenting on several articles... all at the same time... and getting awarded COMMENT OF THE DAY in the middle of it all.

I'd rather forfeit the centre than see one extra of these machines. The havoc surrounding these addictive machines is awful - from first hand experience.

If a large convention centre was commercially viable on its own merit someone would build it without the twisted incentive. Same with movies or broadband networks. The government's just trying to reduce the commercial risk for favoured politically connected private companies

I suspect the convention centre is commercial viable on its own. Christchurch convention center had market share in NZ pre EQ and really filled the bed nights for the central hotels. It was a core regional economic activity and by all accounts very profitable. With it out of the mix this new convention centre  currently has no compariable competition in NZ.

Gambling really has become pervasive. I am now seeing it creeping into a game I occassionally play with my son (MMOG). The latest update several days ago now allows real world money to be wagered, whereas previously it was only in game gold.

An story I read last night was of a child that gambled away $300 without understanding that it was real money, the credit card details are held because of the monthly subscription you see.

They have lost the plot, as have successive governments in allowing casino's.

Selling the legislation? At 49 secs in Joyce said "Their view is that we shouldnt change anything to encourage economic growth".

THAT was his defence.

I think they may have misjudged the electorate on this one. The ground swell against gambling is huge, and the fact that: .

"we would change anything to encourage economic growth" suggests they have lost their moral compass on this one.

The joke of this is that Marcus Curley works for the Vampire Squid who for many many years were brokers to Sky Casino, I think Marcus has only ever had one recomendation on SKC.....no prize for guessing what....its a BUY.

Does this guy really act like a Prime Minister or just another Wheeler Dealer?

I can not see there being any real problem with the offer coming from the PM, after all NZ needs a larger convention centre to compete for International Conferences that lead to tourist spend, bed night stays etc, etc. While I question the need for so many new gaming machines it is interesting to note that in Sydney they are about to spend $1b on a new entertainment venture which is being heavily funded by the NSW Government.

With proper controls over gambling issues this seems like a low cost answer to a resource that we the rate payers of Auckland would otherwise have been asked to largely fund.

BBIII to suggest that a PM should not be offering to do deals is naive at its best, what do you want a PM to do just be a figure head?