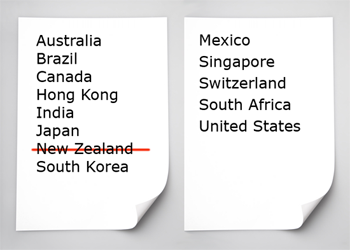 New Zealand could be off a European Union list providing guidance for EU banks and financial institutions about countries with EU equivalent money laundering and anti terrorist financing laws for at least two years after being dumped from this so-called "White List" in June 2011.

Although the list doesn't have legal status, customers and financial institutions from non-EU countries on it are viewed as being subject to EU equivalent anti-money laundering and counter-terrorism financing standards.

"New Zealand’s removal from the White List means EU financial institutions and banks could undertake additional measures to ensure customers (including companies) from New Zealand are who they say they are," a spokeswoman for Foreign Affairs Minister Murray McCully told interest.co.nz.

An EU spokeswoman told interest.co.nz New Zealand was kicked off the list in June last year, having been on it since it was established in 2008. The spokeswoman said the reasons for a country's removal from the list aren't made publicly available. Representatives from EU Member States have drawn up a "Common Understanding" on the criteria to be taken into account when determining if a third country is "equivalent".  This document is available here.

Fairfax Media's Mike Field reported last month that New Zealand had been kicked off the list. Field quoted a Latvian official saying the move stemmed from an evaluation of New Zealand laws and regulations on money laundering and terrorist financing prevention in comparison to international requirements. The move means EU financial institutions can no longer "accept and acknowledge" customer identification and analysis performed in New Zealand.

New Zealand's dumping from the list also comes amid growing publicity around New Zealand registered companies being linked to crime overseas. This includes a report by the Organized Crime and Corruption Reporting Project on how Tormex Ltd, a New Zealand registered company, allegedly laundered US$680 million through a Latvian bank account. It's just one of many examples of entities exploiting New Zealand's simple company registration regime. Another is the General Equity Building Society, which claims to hold about US$5.5 billion of equity through unnamed mines, gold, silver and granite ore.

No plans to tighten the world's easiest company registration rules

The World Bank and International Finance Corporation rank New Zealand the easiest of 183 countries surveyed in which  to start a business. Commerce Minister Craig Foss told interest.co.nz in April the Government had no plans to tighten company registration rules.

A spokeswoman for Justice Minister Judith Collins said New Zealand's dumping from the list seems to have been due to the identification of "deficiencies" with New Zealand’s regulation and supervision of banks and other financial institutions fingered by the Financial Action Task Force (FATF), an inter-governmental body established by the G-7. In an evaluation of New Zealand the FATF said between 2004 and 2008, 197 investigation files associated with money laundering were created.

"Most money laundering occurs through the financial system, however, the complexity usually depends on the sophistication of the offenders involved. There appears to be a higher degree of sophistication in laundering the proceeds of crime now than in previous years. Since 2007, the purchase of real estate, the use of professional services and foreign exchange dealers have been popular means to launder funds. Prior to this, the majority of proceeds of crime were laundered through retail bank accounts," said the FATF.

'Full force' of new Act a year away

"It (the Act) will assist in reducing the risk of New Zealand companies being misused overseas by requiring New Zealand trust and company service providers to undertake better scrutiny of people they form companies for and those companies’ transactions. The Companies and Limited Partnerships Amendment Bill will complement this in a number of ways."

If the Act does come into full force from next June - and placates the EU concerns - New Zealand could be added back to the White List, although this would be at least two years after being dumped from it. The list is reviewed three or four times a year, with the next review due on October 3.

The Government says it has already addressed a number of the FATF identified deficiencies with financial services providers now needing to be registered and being subject to minimum qualification requirements and fit and proper standards. Insurance companies are also now licensed and prudentially supervised by the Reserve Bank.

Meanwhile, McCully's spokeswoman said government officials are working to get New Zealand back on the White List. She said the Government had already been in contact with European Union representatives based in Wellington, and will continue "engaging" with European Commission and EU Member State officials to ensure "appropriate recognition" of New Zealand’s efforts to strengthen its anti-money laundering and anti-terrorist financing protections and its company registration process.

Collins' spokeswoman said the Anti-Money Laundering and Countering Financing of Terrorism Act will help reduce the risk of New Zealand companies being misused overseas by requiring New Zealand trust and company service providers to undertake better scrutiny of people they form companies for and those companies’ transactions. In addition, as part of an All-of-Government Response to Organised Crime, the Ministry of Economic Development will report to Cabinet later this year with proposals for further improvements in New Zealand legal person transparency to assist the investigation and prosecution of serious crime.

Also in the works is the Companies and Limited Partnerships Amendment Bill. This will require New Zealand companies to either have a New Zealand resident director or a resident agent and, the Government says, provide for "improved ability" to de-register registered companies and limited partnerships for overseas criminal activity.

Also see: Opinion: How Bob Groover of Woodstock and his mates, with MED's acquiescence, bring New Zealand's reputation into disrepute.

(Updated with comments from an EU spokeswoman and link to the EU's Common Understanding document).

Is this just one more pile of shite left behind by Labour!

Wolly, I believe that Labour inherited it from National, did they? After their liberalisation in 80s.
So ideology is not good guide into the future but pragmatism can be.

Who inherited it off? oh National.............
Mutually exclusive points of course, NZ is one of the easiest places to setup and do business....v its to easy so the bad guys take advantage.
regards

Good to see interest.co.nz following up on  Government incompetence.
Perhaps now is the time for the Government to employ someone to do google searches for shady finance entities before they get registered as NZ companies.

Its not a good look when the EU has to resort to mothering language to nag NZ officials into doing their job.
Examples of this mothering language follows:
The FATF's recommendations to New Zealand included ensuring the Anti-Money Laundering and Countering Financing of Terrorism Act 2009, not due to come into full force until June 2013, is enacted "without undue delay,"  ensure the authorities overseeing compliance with anti-money laundering and countering terrorism financing get adequate funding, staff, technical resources and training, and introducing effective, proportionate and "dissuasive" civil or administrative sanctions, applicable to financial institutions for failure to comply.
The mothering starts off ok saying its  just recommending, however there also seems to be lots of directive type instructions with lots of "hints" on how to accomplish this task. Obviously there will be consequences if these instructions are not followed.

Whilst it may be correct that NZ is one of, if not the easiest, countries in which to start up a business entity it strikes me as incredibly  ironic that we are being told that we must do it better - read more red tape - by a bunch of w...kers who are incapable of sorting out their own financial affairs-  viz the yanks wall street fiascoes and the eurozone nightmare ... go figure ...?

The problem is that the NZ company registry system is being taken advantage of because it is so simple. Its like there are no checks and balances. The Naked Capitalism blog covered some of these problems earlier on. I am not sure what is really going on here but something is not right.