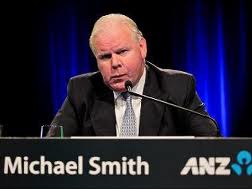 ANZ Banking Group CEO Mike Smith says his bank is on track to meet his target set five years ago of generating as much profit from Asia as it does from New Zealand and is in a good position to benefit from any fallout hitting scandal-tainted British rivals HSBC and Standard Chartered.

However Smith, speaking to analysts after ANZ issued its third quarter trading update on Friday, warned there was "contagion risk" from the reputational knocks some international banks are taking. ANZ had to strive to maintain its own reputation, he said.

"Obviously banking globally is facing significant reputational challenges. There's bound to be some sort of spill over issues here in Australia and we need to redouble our efforts with customers and, of course, with the broader community," said Smith. "There's always going to be a slight contagion risk with this and we do have to work very carefully on ensuring our reputation is maintained."

Asked whether ANZ could profit from HSBC and Standard Chartered's woes Smith said it was in a good position to do so.

"When organisations do have problems, when these things do happen, it does provide opportunity for others and I think we're very well placed right now to take advantage of those situations."

Standard Chartered last week agreed to cough up US$340 million to settle claims made by New York authorities that it laundered money for Iran. The settlement saw Standard Chartered accept the New York State Department of Financial Services' position that the conduct at issue involved transactions of at least US$250 billion.

HSBC has been forced to apologise and set aside US$700 million to cover potential fines after a US Senate committee investigating money laundering claims said the bank had provided a conduit for "drug kingpins and rogue nations" involving money from Mexico, Iran and Syria.

The two British banks are among the biggest commercial banks in Asia where ANZ, under Smith's "super-regional strategy," is looking to grow. In investor presentations released in June ANZ placed itself in the top five corporate banks in Asia, based on a Greenwich Large Corporate Banking Survey, with 2011 revenue of US$1.3 billion and 28% surveyed market penetration. The four banks ahead of ANZ, owner of New Zealand's ANZ and National banks, were HSBC, Standard Chartered, Citigroup and Deutsche Bank.

'As big as New Zealand'

Smith, a former HSBC executive who took the reins at ANZ in October 2007, set out his plan for Asia to be as big a profit source for ANZ as New Zealand within five years at the 2007 annual general meeting two months later.

"Our aspiration is that over the next five years, we can develop Asia to a size where it is as big as our New Zealand business," Smith told shareholders in December 2007.

He set a target for ANZ to lift the percentage of its group profit sourced from the Asia-Pacific to 20% by 2012 from 7% five years ago. Over the same period he saw profit generated from ANZ's New Zealand operations dropping from 22% of group earnings to 20%. (See Smith's full speech to the 2007 ANZ AGM here and a presentation accompanying it here.)

On Friday he said the bank was on track to meet this Asian earnings goal on time in its current 2012 financial year, which ends on September 30.

"I think we'll end up pretty close to seeing 20% of our earnings sourced from APEA (ANZ's Asia, Pacific, Europe and America division) by the end of the year," said Smith.

"I'm very pleased given we have weathered the global financial crisis (GFC) during this period, as well as a 25% appreciation in the Aussie dollar, since we set that aspiration.  I think ANZ is probably one of the few international banks in the world to have delivered on a pre-GFC objective."

ANZ has expanded in Asia including through buying the Asian retail, wealth and commercial operations of the Royal Bank of Scotland in a A$685 million deal, and investing about A$695 million in its locally incorporated Chinese subsidiary.  ANZ has also sought to grow earnings in Asia by capturing banking business associated with trade and investment flows and by cross selling fee-based services to institutional banking clients.

"We are well placed to deal with an environment that is going to be volatile and going to have a number of challenges. And I think this includes a continuation of quite intense competition with every bank fighting to protect and grow their core franchises given the more subdued credit growth environment," said Smith.

Back in 2007 he noted the top 10 European banks generated 11% of their revenues from Asia with HSBC and Standard Chartered generating the highest percentage of revenue from Asia followed by UBS and Deutsche Bank.

"In total these four banks generate A$41 billion of profit from Asia. This only underlines how well international banks do in Asia. By contrast the four major Australia banks, on average, generate little more than 1% of their revenues from Asia. This is despite our proximity and long standing relationships with clients in the region."

"Our vision is for ANZ to be a super regional bank. This is an ambitious goal."

For example.... who actually believes that the OCR will really be hiked next Marh/April as widely predicted by Bank Economists?    Why would the hike happen anyway? Simply because they have'nt been hiked for a while? Will economic conditions be really really positive and growth/inflation so bubbly that hikes will be in order?
What about the non-floating 'floating rates currently,  that never float downwards now. The downward float is being transferred to the short-term fixed rates.  So we can't believe in the floatiness of floating rates.
Why can't banks share the 'hit' that everyone else has been taking for the last 4 years?  Why can't they forgive 10% from each home loan to help stimulate the economy?  Why does every business & household suffer while they increase their margins?

Why does every business & household suffer while they increase their margins?

Because the people that run them are sociopaths

From Greg Pytel:
"Depleting reserves banking" practice, peddled by fraudsters, need an army of incompetent "professionals" to run it. Incompetent to such a degree that they did not understand that this was a crude pyramid scheme that was bound to collapse. Hence a huge bunch of history, anthropology, other social sciences and, importantly, lawyers were employed as banks executives to execute heist designed that way. Typically these people's career in banking was very often based on hang-ups. A huge majority of them were very poor in maths in school and banking environment gave them a sense of massive self-importance. They became "masters of the universe" whilst many of their friends who were so much better in science at school were left behind in pretty poorly paid and mundane engineering jobs.

Think about it.
10% write off off every loan off their books would probably wipe out their capital base.
(if you are really seroius about reviving the economy you would write off business debt, not personal debt as business produce weath and employment, not house holds)
Time you had a real look and understood a bank's balance sheet.

Wealth is relative and not always monetary - unfortunately our egos believe that having more monetary/material wealth makes us happy.

Interest rates will go up because eventually the "pump" phase of NZ assets will come to an end and the "dump" phase will start, leaving a massive hole to be filled. The only way to attract the foreign money back will be to offer better rates and assets at knock down prices a la 1984-85. Rinse and repeat.

Following Standard Chartered & HSBC, Deutsche Bank now in the gun: "US Federal and state prosecutors are investigating Deutsche Bank and several other global banks over accusations that they funneled billions of dollars through their American branches for Iran, Sudan and other sanctioned nations, according to law enforcement officials with knowledge of the cases.
http://www.nytimes.com/2012/08/18/business/deutsche-banks-business-with-...