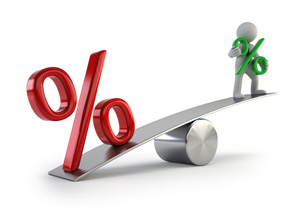 In its latest Home Loan Rates report, the bank said even though there were signs that domestic growth was starting to slow to a more sustainable pace, it still expected the Reserve Bank to increase the Official Cash Rate (OCR) to 4.5% by March 2016.

"We expect other central banks to will join the RBNZ in lifting rates next year too, adding to the upward pressure on term rates," the ASB report said.

The biggest increases in mortgage rates would be for those up to two years fixed, the report said.

Longer term rates above two years had already had the likely rises in the OCR factored in to them, so would not have as far to move when they finally arrived.

However the bank also warned the if the Reserve Bank hiked the OCR more aggressively than expected, to say 5%, that would lift the floating rate to around 8.25% and fixed term rates would also rise to around 8%.

"With this in mind, a key thought is that fixing for longer terms now does give extra insurance against stronger OCR increases than we are expecting," the report said.

"Depending on the borrower's risk appetite, that risk may be worth taking, and the cost of some added certainty is not high based on current mortgage rates."

Consider the state of the economy with an OCR of 5, and floating mortgages at 8%.

If the ASB is right then in the next 5 years we will be enjoying a booming economy, ever rising property prices, higher inflation  and a very strong dollar.
Brave call.

It isnt right, but then its a drug dealer in debt...
regards

12 months is a long term fixed term in today's economic conditions.
6 months medium term.
Floating is short term, with the upside of zero break fees, and agility to jump to fixed at any time with no fees.

Considering that number of bank loser economists who screamed fix, fix! FIX! etc for years while we off such a great rate you'd think by now they would figure out something is amiss....but nope to wedded to BAU, never ending growth....
When the RB drops the OCR and it will they will be left with their pants down.
regrads

Not rump steak i bet.

Bought with all the pay rises I have been getting?
yeah right.

With the reserve bank  working for Australian banks, thhey are the only ones who will be happy.
Meanwhile, the NZ consumer faces rising living costs and stagnant wages.
Theres no 3.6% average wage rise anywhere, it was a John Key economic prediction in December 2013. NZs dairy n meat prices are set in New York, not at the farm gate, this is where Keys fiction of words about the economy being good, its great for nobody, except banks..

If there is 3.6% average someones somewhere is pillaging IMHO.
regards

Ever worked near the bank treasurer in the dealing room? - higher rates substantially benefit the liquidity book - yesterday, in our own little world banks or other qualified institutions submitted RBNZ Bill bids for NZD 400 million @3.5% - higher would be better. Higher carry spreads returns were never sneared at in my time - RP rates never rise as fast as depo and Tsy specials are not uncommon in a rising rate environment as most dealers RP in the collateral (CG or otherwise) and short it.

Yes Stephen, for more years than I'd be prepared to admit, and for some periods right beside one. Equally we both know a lot of situations where a bank would money from lower rates, that's so often when the most money is made. However, we're talking on the margin here, and I don't  the post was being that sophisticated in its statement May be wrong, hence my simple question, why?

I agree, margins are quite slim these days.
OCR has not much impact on balance sheet, apart from a lag between LN and TD rates.
Banks are making their money from derivatives (and even then mainly from the fees of those derivatives), fees, and the euphemistiacally named 'streamlining', which is corporate speak for squeezing your staff, and moving all automated tasks off shore, to Bangalore or KL.
.
OCR has very little impact on profit.

they must be living in a different country.   Things around wairapapa, manawatu, horowhenua...we have the same banks, but economy is really looking sore.  A high OCR is completely unjustified.

Agree, much if not most of NZ is being squeezed because of a silly housing price bubble in some of Auckland, its insane.....let the houses go to 2, 3 million, who cares. Break the economy with a high OCR and we will all care.
regards

Come on nzcoolie, you sound a lot like the poster formerly known as Zanyzany (and after that kimy).

If you truly believe Wheeler is intent on crashing the economy you are dreaming - his career and reputation depend on him succeeding in his current role. He has done an excellent job thus far with LVR rules and rate hikes. Yes he should be pausing for a while now to see where the economy goes and yes that's exactly what he is doing.

With respect to China - keep an eye on that "continous boom" - in the next few years it could become an almighty BOOM!!!

Definition coolie - during the 19th and early 20th century, was a label applied to a person from Asia, particularly if they were from Southern China, the Indian subcontinent, the Philippines or Indonesia.
Today, it is a contemporary racial slur for people of Asian descent

can't play boom and bust when there's a big buyer in town,

I hear your pain steven but if house prices in Auckland are left to inflate further and further into bubble territory the economy will break for sure! Tax revenues would be stuffed when the bubble burst - bank lending might dry up for everyeone.

It's easy to blame the RBNZ meanwhile National have just introduced a first home buyer subsidy to further add to the demand side! How is it that a 100bps rise from record low interest rates is destroying every economy outside of Auckland and Christchurch? Either there is an uber amount of debt out there or there are deeper seated issues that politicians should be dealing with (I think it's the later).

Im not in any pain, myself, yet.  What you are saying is we are between a rock and a hard place, I am not so sure.
Lets look at the rock, a high OCR is directly damaging to businesses both in their costs and the exchange rate pain, this is across the country.  Most of the country has not had a crazy property price rise.
So lets drop the OCR to 1%, what happens? I'd assume the carry trade goes bye bye and hence the exchange rate drops.  Exporters do better.  Prices might rise in Auckland but with the LVR it will not be the FHB whos buying and hence debt wise I dont think it would be so bad.   Sure the speculators will buy, but I suspect this game is now seen to be over.  If the bubble pops it will I think be mostly in Auckland.
Hard place, rise the OCR, carry trade booms, NZD rises exporters feel pain and maybe even cut jobs.  PPl with "normal" mortgages suffer and we see prices stagnate and drop, this then becomes self re-enforcing spiral.
For the former the silly ppl in Auckland get badly burned, mostly its their own greed.  Cant feel sorry for them except for the FHBs.  The rest of NZ shouldnt be badly hit.
For the latter the auckland bubble pops anyway.
Now in extremis both have the same result a severe recesion if not a depression and a long one.
Keeping the OCR low on the other hand looks safer, way safer the lesser of 2 evils IMHO.
regards

Its a pity we cant have a Cuban party. On the back of  that defloat the dollar, since Fonterra can pretty much keep the economny afloat, neo free market experiments has failed in with our public commons, we have our own oil to survive.