Finance Minister prefers not to spend taxpayer cash to avoid Sky City 'eyesore'; no money in Budget 2015 for it; would have to come from elsewhere

Finance Minister prefers not to spend taxpayer cash to avoid Sky City 'eyesore'; no money in Budget 2015 for it; would have to come from elsewhere 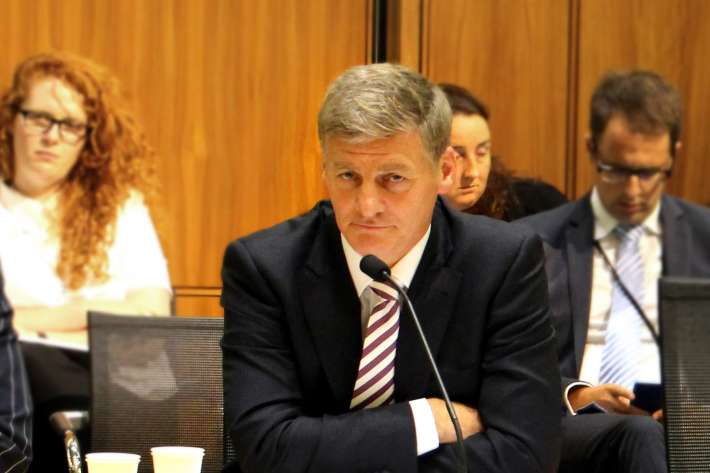 Finance Minister Bill English has pushed back at suggestions from Prime Minister John Key that the Government could have to spend taxpayer cash to ensure a new Sky City Convention Centre was bigger, "more flasher"and "not an eyesore."

Sky City Entertainment said in December the costs of the convention centre, which it had earlier agreed to build for NZ$402 million, had been revised to a range of NZ$470 million to NZ$530 million. Key said yesterday that he was open to the Government spending some cash to ensure an attractive centre was built.

"The escalation in prices to build the convention centre, which is bigger than was proposed and is flasher than what was proposed, means there's a hole."

English was challenged on the risks to the Budget 2015 in a Finance and Expenditure Select Committee hearing and whether he had been informed about the possible need for an extra NZ$130 million, and again afterwards by journalists.

English the option of having pay taxpayer cash to ensure the completion of the centre was the Government's "least preferred" option and there was no contingency in Budget 2015.

"There's no contingency for that. If the less preferred option ended up being the option then that money would be part of the Budget process," he told reporters.

"There's a small pool relative to the demand," he said, agreeing that any spending on the convention would have to come at the expense of spending on other areas, such as education or health.

"That's always the case in a budget. Whatever you put in, someone else misses out," he said.

"In the end there's NZ$1 billion. Health is a high priority, and it's the lowest priority stuff that drops off. Health is always the highest priority. I wouldn't suggest there's some trade off between Health and what you're speculating is some kind of taxpayer spending."

Meanwhile, English told the select committee Budget 2015 would be delivered on May 21.

The exchange in Question Time between Labour Leader Andrew Little and Key is below.

Bill English for Prime Minister !
It's been a thought forming for a while.   Might not be so far away either.

Wonder whether all this was just a ruse to get Skycity shares at a cheaper price ? What are the trading patterns following this see saw of statements ? Who is talking down and up ? And why ?

The only way the convention centre will make money is if it costs zero dollars.  Even paying  20% of the total cost, would prove a poor investment.

" Key said yesterday that he was open to the Government spending some cash to ensure an attractive centre was built.  "|

Oh Key, sounds great...as long as it comes from elected Government and not taxpayer funds.

Otherwise, a tender is a tender.

Why can the public councils "sell assets"  while Sky City backers (where are some of them from?) get a helping hand.   Just who are you servicing with that taxpayer cash?

(even I would rather see the money go to councils than private stupid deals like the one the government stuck themselves with there - the government was warned about this specific outcome, those decision makers need to foot the bill...personally  (not the rest of us personally)  )

his problem.... or I should say, our problem, is that he thinks he is The House (or has a seat at the table, rather than being their patsy)

What's the problem?
Bill English could accept Sky City shares at a substantial discount (say 50%) hold them for a few months and sell on the market .
That way the shareholders pay by way of dilution.
Maybe vest them in the Cullen Fund which has been neglected by this mob.

What's the problem?
Bill English could accept Sky City shares at a substantial discount (say 50%) hold them for a few months and sell on the market .
That way the shareholders pay by way of dilution.
Maybe vest them in the Cullen Fund which has been neglected by this mob.

I don't think that is quite what Sky City had in mind.
"That aint working, that's the way you do it. Money for nothing and our bricks for free"
Of course the precedent has been set - big, highly profitable multi national corporations have got this outfit figured out. Warners, Rio Tinto, Sky City think they have every right to your tax dollars and John Key is determined to make sure they get it.

No payment to Sky City but have Sky city issues preference shares to govt or the super fund with adequate dividend with sky city having the right to buy them back prior to a certain time, and following that time the preference shareholder having the right to excersice either a buyback or conversion to ordinary shares. On and while we are at it Sky ity provides options on say a one for 5 basis to buy shares.
Sky city get there money, govt gets an investment with some exit opportunities, Super Fund gets a better investment than shares they are currently holding.
While government may not be in the business of picking winners, the NZ super fund is, and I expect that they are exposed to sky city shares.

...good performance by Little, at this rate he can expect a decent rating rise at next survey.  Key floundering.   Political colours aside, good to see some strength appearing in the Opposition.

I wonder how this will be looking to some of those who voted for National, ie the swing voter.
The opposition should make the most of ths one on JK.

Wasn't that many months ago Chorus popped up and said the Government needed to contribute an extra billion or two, to keep the ultra fast broadband project on track.
For several weeks it looked like the government would fall for it.  Then, unusually !   Government woke up.   (given a good prodding from the public)
It was a classic ploy of taking private profits when they existed, and dumping losses onto the taxpayer.  It did not happen in that case.
The Chorus chief executive still has his job strangely, but surely will not try that one again.
Given Sky City has stuffed up big.   Let the shareholders carry the can.

One thing on Chorus' roll-out, we were down for the fibre and now are not. So what really appears to have happened is we are getting less for the same money.
PS If you cant milk the punter, milk the Govn.  This has been an ongoing and successful strategy for decades.
"shareholders carry the can" I wish. Sometimes I succum to conspiracy thoughts and wonder when I see comments like JK's if he isnt bought out in some way.  Why do I think that? because in the theoretical world of business / right wing economics its let he fittest survive, reality check that seems to never happen to the big boys. Little businesses those owned and operated by NZers, hell yes.
Really I think NZers should figure out who the parasites are and who is really on their side and who really isnt even if they say they are.

Is it Chorus roll-out?  They've contracted the actual labour to another company....

Labour, yes I believe it is contracted out, but the ownership overall is Chorus, who holds the agreement with the Govn?

JK actually admitted near the end of the video that Skycity have lodged for a larger center, surely the contract for any extra would not include this. They want bigger, they pay.

Also, he is sounding more and more like a weasel and spinning words , I just can't trust anything he says.

Remember the title of the James Hadley Chase novel...There is Always a Price Tag. 'Free' doesn't cut it.

The only question in this deal is who is going to pay the price today and in the future, when Skycity comes running for regular subsidies to keep the Convention Centre operational. Conventions were never going to be a profitable operation in this corner of the world, which cannot compete against other more established and developed venues. The wolf of pokie licencing was wearing the 'sheep' skin to get what it wanted, pun intended.

hold them to contract, sue them for the failure.  hold government individuals liable for negligence if things don't measure up. same as small business.

what do you mean when sky city come runing for regular subsidies?  They already have, it's been signed into law, they get :

That government granted monopoly will generate an income stream that is to be used to cover the capital and operating costs of the convetion centre.  The government has grant them this until 2048.

Whose bank accounts do we audit for the kickbacks that must have been necessary to approve this blindingly obvious scam in the first place?
Pleasingly retro to see the casino industry getting in touch with their organised crime roots, though.  "Nice streetscape you have here.  Pity if something ... ugly ... was to happen to it.  Capiche?"