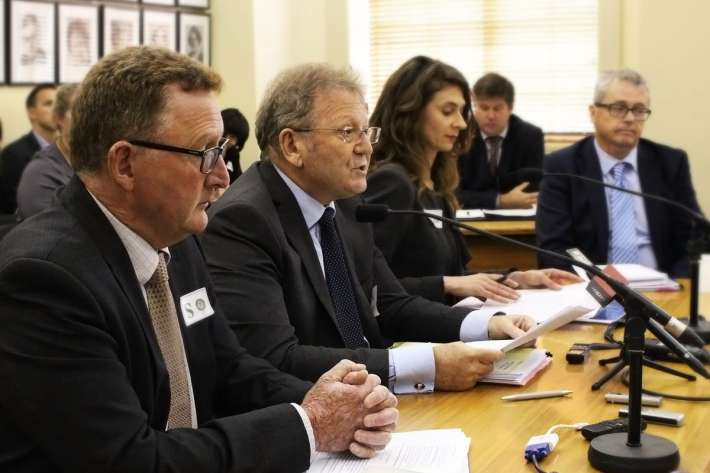 The Guardians of the New Zealand Superannuation Fund have done a preliminary review of the fund's decision to lend US$150 million through a vehicle called Oak Finance to Portugal's Banco Espirito Santo.

The fund has written off the investment after the Portugese Government and the Bank of Portugal retrospectively voided the insurance connected to the loan and the fund is now confident legal action will recover the money.

The initial review by the fund's risk compliance division that was tabled to the board of the Guardians last week found the decision was made within the fund's delegated authorities and was in line with the investment policies approved by the board, Chairman Gavin Walker told a Parliamentary Committee.

Walker said a second part of the review into the fund's investment processes was still ongoing, but was likely to lead to some 'refinements', including potentially ensuring that any such loan is clearly labelled as being from the New Zealand Superannuation Fund, rather than from a vehicle that could be confused with being linked to someone else.

Chief Executive Adrian Orr said he thought the apparent confusion over the involvement of Goldman Sachs in arranging the loan was a factor in the Bank of Portugal's decision, and that a clear labelling of the New Zealand Superannuation Fund's role could have prevented the Bank's retrospective voiding of the insurance connected to the loan.

The fund repeated it was “very confident” of winning back the funds.

Walker and Orr said the fund did not expect to change its investment policies because of the loss, but their may be minor “refinements around process”.

“The core policies, procedures and processes all remain as they are,” said Orr.

After the collapse of BES, the Fund was told that the loan, which was part of a group known as Oak Finance arranged by Goldman Sachs International, had been transferred into what Orr described as the new ‘good bank’ – Novo Banco.

But Portugal’s central bank, the Bank of Portugal, later reversed the transfer, placing the Oak Finance loan – but not others within the same class – back into the failed BES.

Orr said the Fund believed the actions of the Bank of Portugal were unlawful, and that the “information that the decision was made on was inadequate.”

One of the “refinements” likely to be made to the Fund’s processes was ensuring increased transparency when lending. Orr said he believed that the Portuguese central bank would not have decided to transfer Oak Finance had it realized who the noteholders were.

“This vehicle was called ‘Oak Finance’. It was not called ‘New Zealand Superannuation Fund’ and so the Bank of Portugal, when they were having their regulatory discussions, could not see ‘us’. We weren’t the lender of record,” said Orr.

'Not able to be forseen'

Walker told the committee that “nobody could have foreseen that action by the Bank of Portugal”.

“What we saw was only our loan (and the other investors’ loans in Oak Finance) reversed. In other words, you had a tearing within the same loan class, where certain institutions were treated differently from other institutions and depositors. Now that is very unique and I don’t know, in terms of bank resolutions worldwide, where that has ever occurred.”

He said the Fund’s investment strategy was “at the low risk end of the spectrum”, despite rating agencies’ downgrading of Banco Espirito Santo before the collapse.

“By low risk, what we have done is we have provided a loan through this Oak Finance vehicle, a very simple and standard vehicle, to a bank. At the same time we took credit insurance out against that bank so that, if anything should happen to that bank, we would get paid out on the insurance. So, in that sense, we weren’t taking a view at all on the credit worthiness of that bank, we were doing our best to negate any exposure to that and this is a very standard process globally,” Orr said.

'Had been successful in past'

Speaking to reporters after the committee meeting, Orr said it was a strategy successfully used by the Fund for over five years.

“I would say we would have invested through time probably over NZ$1 billion in strategies like this and they have all worked exactly as anticipated,” he said. “It is the separation of our insurance from our loan that has created this issue. So what is a very globally standard and simple structure has been split apart.”

He told reporters that taking the case to court was “not a cheap exercise” and the Fund had already spent “around 60,000 British pounds in terms of getting our legal cover and around NZ$30,000 (here)” but it was “very confident” of getting back its money plus at least some of its legal costs.

I'm wondering upon what grounds would a loan from NZ Super Fund be treated differently than that of Oak Finance?
" So what is a very globally standard and simple structure has been split apart"                   Yeah? And tell me that you are not reviewing your other loans you have made on this basis....

A bit of an interesting read.
https://dimpost.wordpress.com/category/finance/

And here's some more on the broader issue - http://www.breakingviews.com/bes-bail-in-leaves-cds-traders-struck-out/2...

Wonder how many even bother to read these technicalities. Everyone seems to have already formed an opinion, and are busy closing their eyes and chanting "Goldman-Portugese-Venezuela, WTF!!"

Well, Goldman's clients are not generally labelled "muppets" without cause.

While Goldman Sachs Group Inc. employees may get less compensation than in the past, many cashed in last year for a payday they’ve been awaiting since the depths of the financial crisis.
Employees exercised options worth $2.03 billion in 2014. More than 96 percent of the contracts were granted as part of 2008 compensation. Last year marked the first time bankers were able to take advantage of those awards.
Goldman Sachs’s stock has more than doubled since it granted 36 million options in December 2008 to give top performers incentive to stay. The bank had been forced to slash compensation costs that year, as a global credit crisis endangered the firm and pushed its shares down 61 percent.
The more-than $2 billion total disclosed in a regulatory filing this week is the pretax gain from exercising the options. Recipients -- who can choose to keep the stock or convert it to cash -- may include former employees who left the New York-based company after receiving the options. Read more

Well I doubt there's any financial institution of a meaningful size not having had any dealing with GS, all muppets I assume. Or they should only deal with the likes of UBS, Barclays, Citi or any other names that stand on higher ethical grounds to you?

Doesn't help that GS are deeply loathed in Europe, helped in no small part by their sleazy cooking of the Greek Government books prior to acceptance into the Euro.

We are are all underwhelmed that their employees conduct themselves as dishonourable men/women without integrity.

Royal Bank of Scotland (RBS) chief Ross McEwan has conceded the 80 percent state-owned bank will pay staff lucrative bonuses from a pool of £421 million, despite the fact it faced losses of £3.5 billion in 2014.
McEwan took control of the scandal-ridden bank in 2012 after it became insolvent and received a £45 billion bailout at UK taxpayers’ expense.
The RBS chief told BBC Radio 4 he would not be taking a £1 million bonus this year. 2015 marks the second year he has declined to accept the annual financial reward.
Commenting on bonuses awarded to other RBS staff, McEwan admitted people are “quite right” to view them as “outrageous.”
Nevertheless, he maintained he could do nothing to change the situation. He said it is necessary for competitive banks to pay staff financial awards if they carry out technical work - read more