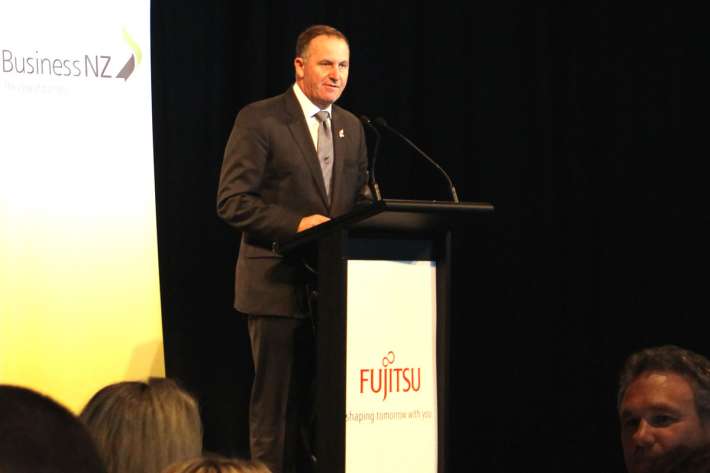 Prime Minister John Key has announced Budget 2015 on May 21 will include NZ$80 million of new spending on private sector Research and Development and NZ$244 million on seven new schools and a total of 241 new classrooms.

Key made the announcement as part of a Budget preview speech to a Business New Zealand luncheon in Wellington.

Key said the economy was peforming well, pointing to the New Zealand dollar's rise to near parity, which would have been considered unthinkable until recently.

"I say we are just seeing the first signs of progress because a couple of good years are not enough to change our long-term wellbeing. To really improve future prosperity for our children and grandchildren, we need to continue the reforms that have served us well to date," he said.

"Two of the most important ways we can achieve sustainable, long-term growth are through innovation and investing in the education of our young people," he said.

"The Budget next month will set out further steps in both of these areas."

Key announced Budget 2015 would include NZ$80 million of investment in private sector Research and Development, which was equivalent to a 14% increase in Callaghan Innovation's co-funding budget.

"It will be allocated to a range of qualifying businesses over the next 12 months on an objective independent basis," Key said.

Key then announced the Government would spend another NZ$244 million over the next four years to build four new state schools, including; Rototuna Senior High School in Hamilton, a primary school in Rolleston, near Christchurch and two primary schools in Auckland – one at Kumeu and the other at Scott Point.

"We will also invest in three new kura kaupapa Māori schools. They will be in Whakatane, Gisborne and Hastings, recognising demand in these areas," he said.

The seven new schools would provide places for 4,000 extra students and the first school would open in 2017.

"As part of our package, we will also expand facilities and classrooms at four existing schools, including Golden Sands School in Papamoa, Hingaia Peninsula School in Auckland, Shotover Primary in Queenstown and Papamoa College in Papamoa," Key said.

"In addition, over the next year we will fund an extra 241 classrooms at other schools around New Zealand. Almost half of them will be in Auckland. This considerable new investment includes the first tranche of the NZ$350 million we promised in the election for new schools and classrooms to meet population growth in and around Auckland."

"The money will come from the remaining proceeds of the Government’s share offer programme – channelled through the Future Investment Fund."

“National has been building up to this Budget for seven long years, promising a surplus and rewards for years of hard work and cut backs. Kiwis have fulfilled their end of the bargain. They deserve to see the pay back," Little said.

“Today’s announcement of NZ$244 million over four years for ‘new’ schools is a reheat. A number of these supposed new schools have been announced before. This is the Government trying to dress up business as usual. Building schools as populations grow is a core Government function," he said.

“The Government’s $20 million a year spending on Research and Development might buy Steven Joyce some good photo ops at his favourite companies. However, it won’t make a real difference to the export sector. To really support innovation we need an aggressive tax credit system that rewards all innovating businesses," he said.

“We have a housing crisis spinning out of control, the regions are being neglected and Kiwis are still waiting for the wage rises Bill English promised them."

$80 more million for private sector R&D grants - but votes down the Feed the Kids Bill at its first reading (which would only have seen the bill go to Select Committee) - estimated full cost of the programme, $100 mil.

This is the most morally depraved government NZ has ever seen.

yes how terrible that parents should be expected to feed their own kids and that their incentives for businesses to improve the economy....

I expect who gets what has been arranged in advance.

Not to mention the fact thats pumping millions into a scheme which National relegislated into a burecratic nightmare last term, so much so that even those who adminster it admit is a joke.

Perhaps they made a bureaucratic nightmare of it to purposefully discourage actual NZ domiciled small businesses - and hence pave the way for multi-nationals (who have with the head office resources/personnel to navigate the bureaucracy successfully) - as scarfie points out with the link below;

I  trust modern mathmatics will be taught.
One dollar owed, plus one dollar borrowed plus what percent at what interest rates equals infinity, when all is not equally divided add nauseum.

At the moment I have Germany supplying the R&D for my technolgy as New Zealand pollies and institution are too stupid to see it. Perhaps a bit of corruption also since my technology would compete with electricty, but what they don't see is that I will be making it also. USA is probably going to provide some assistance also but that is 100% private rather than an institute involvment that Germany has. An expat is also fighting hard to get it happening there also. So sorry Mr Key you are full of it.

Then there is the dodgy going on that Chalkie discovered when he looked at the R&D funding going to companies that don't pay any tax here. http://i.stuff.co.nz/business/opinion-analysis/63107486/red-ink-and--corporate-welfare--go-hand-in-hand

Shocking - but nothing surprises me with this Government..

yes you think the _NZ_ government would be "smart" enough to ensure that any R&D benefits for for wholly own NZ companies, and/or with NZ strategic benefits...not subsidising foreign multi-nationals R&D.

Its bad enough that the government never bothered to work on closing the tax-dodge door either.

But how well hidden is it?
Are our politicians that stupid or poorly educated that they don't realise these things are going on (things that a first year university student would learn)??

So _why_ haven't they done anything about it?
Oh... does it happen to have any coincidence with the governments constant plug that "foreign owners" and "foreign capital investment" is 'good for us'???   Which is clearly another massive LIE to anyone who has studied accounting or runs a business.

Just why then, are our MP's dancing on the heads of pins for these companies/interests?
Could it be anything to do with the TPPA or similar deals?  Which no citizen in any connected country seems to want, yet the governments seem hell bent in ramming it through somehow?

Just what kind of collusion is occuring...and how can we stop it dead.

Two issues, intellect and personality type. The type to be popular and voted in are not generally the type that are great thinkers. I would think it representative of any government that the average IQ of the Third Reich was only 128, the best of them the banker. Perhaps Hilter himself was higher, but not necessarily so. I haven't totalled up the US presidents, but it is available. Would New Zealand be lower with a smaller pool to choose from?

Now the reason you and Kate (amongst some others here) can see the faults is that you appear to be a good margin above that. But statistics are against you as you are outweighed by the mediocre, I mean this website is a good example of that.

Thing is Cowboy is that you gave your MBTI type one time and you don't fall into the Rational group. I think the answer lies in my second paragraph.

Yet still no surplus? something's not adding up here, we keep hearing how well this economy is supposedly doing, yet in 2 and a bit terms these guys still can't balance the books once, even after selling off 6 billion in assets.

There never was going to be a real surplus, it was an inflation con, but we didnt get any (inflation) so no make believe la la surplus.  So in effect at best it was slight of hand if not outright dis-honest lie.  About all i can say is none of them ie other parties are honest either.

Correct me if I'm wrong but didn't the other major party in New Zealand turn a profit for 9 out of the last 9 terms they served in power?