Key says would still recommend first home buyers go for apartments despite 35 projects failing to get off ground due to funding, cost issues; says consenting still strong; English points to ramping up of Govt building plans

Key says would still recommend first home buyers go for apartments despite 35 projects failing to get off ground due to funding, cost issues; says consenting still strong; English points to ramping up of Govt building plans 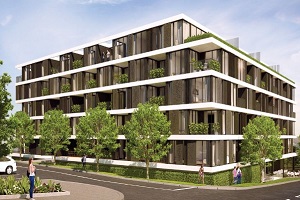 An artist's impression of the proposed Flo Apartments in Avondale

Prime Minister John Key has downplayed a report that 35 apartment and townhouse developments in Auckland have fallen over in the last year because of funding and cost problems, saying new building consents remained strong and he did not see this issue as a major problem.

Anne Gibson reported this morning that Pete Evans, Colliers International's residential project marketing national director in Auckland, had said 35 residential developments had not gone ahead in Auckland in the last 12 months because of funding and building cost problems. The comments came in the wake of news yesterday that the 91-unit 'Flo' development in Avondale had been cancelled because the developer, Jon Sandler, said banks had tightened their lending practices. Deposits had been paid on 81 of the 91 units, although deposits will be returned.

Key was asked about the report by reporters in Parliament, given the Government's strategy for dealing with the Auckland housing crisis is to increase housing supply, largely through the private sector developing more affordable apartment and townhouse-style projects. Developers have reported in recent months that banks have changed their risk appetites, particularly for riskier apartment developments and for rental property investors buying off the plan. Interest first reported on June 3 that ANZ had stopped lending to rental property investors buying apartments and house-and-land packages off the plan.

"What it shows you, of course, is that there is always risk when it comes to property development and it's one of the reasons why, when people say 'just fix the housing supply issues', it's never quite as simple as people say because it's real people's money that's on the line," Key said.

"And, of course, the developer would be going ahead if they thought they could make money easily out of it. So it's just an interesting fact that that's there, but I wouldn't take too much out of it. While they may not be happening, the consenting looks very strong. If you look at the numbers that came out two weeks ago, the numbers of properties being developed in Auckland, already on the go, is very strong," he said.

"From time to time you'll always get a few developments that all over."

There were 970 new dwellings consented in Auckland in August, including 163 apartments and 273 townhouses. The trend for new dwelling consents in Auckland has picked up in recent months to just over 900 a month in recent months, but remains well below the 1,100 a month seen necessary to keep up with population growth, let alone eat into the 40,000 shortage currently estimated for Auckland.

Key said he stuck by his advice to first home buyers to go into apartments, despite some saying they were disappointed the Flo project had fallen through.

"t seems to be around the building costs for the developer. So, in the end, if you own the property, I think apartments are a very credible alternative for people to buy for a whole variety of reasons, everything from convenience to affordability," he said.

Banks pulling back lending to developers

Challenged on the funding issues cited by developers, Key said this was not new.

"Some of the banks actually have a policy that they don't lend on apartments in a major way," he said.

Asked about an apparent change of approach by banks in recent months, he said: "Yeah, well, what the banks are concerned about is that if there is a fall in the property market, they are worried that apartment may be affected a little more significantly than other properties. So they are just being a little bit more conservative. They always have a certain degree of the number of apartments they have on their balance sheet, so it just varies. Every bank takes a different position."

Key said he asked all the banks about their lending policies.

"Some of them lend pretty fully on apartments, others are a little more cautious," he said.

Asked if the Government needed to step in to meet a need the market could not meet, he said: I don't think you can entirely say that is the case at the moment. As I said, if you look at the consenting numbers they are quite strong. But you are always going to get some things that don't go ahead, and that demonstrates what I said earlier, it's not as straightforward as some people might want to maintain."

Meanwhile, Finance Minister Bill English pointed to Government plans to ramp up its own developments on Housing New Zealand land in coming years.

Not surprising : [Personal abuse removed. Final warning. Ed] We kiwi are use to it.

Nothing is ever a problem for the PM.

Yes it looks like when things get a bit embarrassing they get JK out to sprout a few words of nonsense and the sychophantic media nod sagely and publish the press releases as if he is the source of all knowledge. You will see that Smitty is no longer allowed to do media pieces as no one longer believes anything he says about houses.
At some point I hope that NZ wake up to our emperor without clothes but there are so many invested in the immigration and housing Ponzi I think they choose to ignore the obvious problems building up.

My feel is that increasing the supply will not really fix the problem. What is needed is to curb the global demand, close the doors for foreign buyers and make much more difficult for investors to buy the properties without money.

Although it is fairly easy to do so - will never happen as it would fix the problem quite quickly...

Because NZ cannot fix the supply problem. End of story.

I personally prefer the nuclear option - solve demand in a the blink of an eye.

Well the Singaporeans and the Japanese built high-density public housing to ensure "stability for all" in their key objective of economic independence and development. It looks like NZ will leave it to the private sector to "provide", whatever that means. Let's hope there is a robust legal framework to protect the punter if the govt is going to remove itself or take a role as mentor.

I would be interested to know how many dwellings those 35 projects contained. 35 isn't a big number but if they were all for 100 unit blocks...

Should politicians be 'recommending' apartments, as per the article title?
I would never buy one, unless teh figures stacked up for renting it, as you have a lot of ongoing costs involved, which are not fixed. eg Body corporate fees, which are huge in NZ.

That's why it makes sense for govt to own apartments. Body corporate fees can be reduced by employing people to provide cleaning and maintenance services. I rented an apartment from Osaka City in a prime location and the services were outstanding. We even had an on-site property manager who was retired and reveled in dealing with tenants.

What are others of the 35 projects canned? There's a few high profile ones I'd guess were sold far too cheap to be feasible.

Well blow me down

Lets face it , if the projects were genuinely viable and had enough pre-sales , the deposit money in the lawyers Trust account it would be all go .

I get the sense that the building boom is about to turn anyway .

The banks are restricting lending but other non-bank lenders are entering the market and they all have different risk parameters and different appetites.
A colleague of mine has two hedge funds one Australian and one Asian who he met with last week that have in excess of $300.00m that they have to inject into NZ property development in both 1st mortgage and 2nd mortgages and they want deals.
The Australian firm is in NZ today and are looking at transactions in the $20 to $50m space. Clients need 15% of cost to complete equity and funder will sort the rest.
The development funding world has shifted though many developers will not realise that yet or won’t believe it.
The best developers with the best deals will get support by their banks but the others (be it tier 2 developers or tier 3 developers (in the eyes of the bank) will need to improve their methods and structures or face difficulty in raising funds from banks and so will need to look elsewhere and accept a higher cost for capital.

Housing NZ can fill the gap, they have heaps of potential on their lands to build cheap apartments.

No it looks like HNZ in same boat as private developers - how many billion will the government have to borrow to pump into Housing NZ? https://www.tvnz.co.nz/one-news/new-zealand/housing-new-zealand-have-no-...

Has anyone watched FLIP OR FLOP on BRAVO.When you compare the cost of destroying a kitchen,bathroom or even replacing windows etc then replacing them,the cost appears to be so much cheaper.
Then again it might be rubbish made just for tv but the costs do appear to be much more affordable thats why you see so many nice houses in NZ in a state of decline.TOO expensive to fix.

They certainly knock down anything with black mould, no attempt to fix, They build reasonable houses very cheap, custom houses are a different matter.

Yes, brand new kitchens, bathrooms, floors, plumbing, painting all with budget but decent finishes for around $60K. Inspiring for sure, but not reality in New Zealand.

You are correct that it is cheap to do repairs etc. in U.S.A. and Great Britain at the budget level but watch Million Dollar listing in U.S. And you will see quite the opposite.

U.S.A chock full of property taxes that hardly makes it worthwhile to flip houses at the lower level.