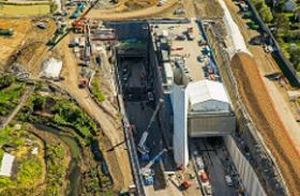 Finance Minister Bill English has today launched the Government’s Ten Year Capital Intentions Plan (CIP) which shows a pipeline of $100.9 billion worth of infrastructure projects over the next decade.

The 2016-2025 CIP is the third of its kind since it was launched in 2014 and brings together the infrastructure investment intentions of central and local government, State-owned enterprises, and public and private companies.

It shows that the total actual and estimated spend out to 2025 has increased by nearly $15 billion since last year.

“Ensuring that the right frameworks are in place to support sound infrastructure investment decisions that meet the needs of a changing New Zealand is an important focus for this Government.

“Central and local government are increasingly working together to improve infrastructure investment and the management of existing infrastructure necessary to underpin economic growth.”

The CIP can be downloaded here: www.infrastructure.govt.nz/plan/evidencebase

Our 1.8 billion surplus looks a bit pale.
I wonder what the needed infrastructure would have been if we didn't have population growth these last 5 years?
I wonder if we would be able to enjoy a much lower tax rate if we didn't need this infrastructure?
I wonder if our young people would be enjoying a higher % of employment without the population growth and be enjoying higher wages?

100 billion dollars is a cost of $100,000 for each taxpayer if NZ has 1 million taxpayers.
We need this infrastructure to support the last 5 yrs of population growth. We will bring in more migrants to build this infrastructure. We are on a treadmill. welcome to the new NZ.

Genius at work - Four for None

The concept of attracting young skilled migrants to under-pin the future demands of an ageing population was such a fine concept ..... simple .... genius

This week it was revealed that many young asian couples come in with 1 child and then bring in their four (4) elderly parents. Once the parents are settled, the skilled one and spouse depart

Four for none
The reality is, the intention and the end result are two different things
The problem is being compounded by importing more retirees than young supporters

It really goes to show that it was never really about looking after an aging population - that was just spin. No there is something else motivating this. Also it doesn't make sense to import skills when skills can be acquired by your own young people. Surely it is better to train your own people even if it is less efficient. Many of our young people are forced to go abroad to study because places are limited for certain subjects in the universities.

Yes Zachery, the ageing population problem was a myth as they had built the infrastructure needed to support themselves.
The younger generations didn't need to build infrastructure like dams roads and harbor bridge as it was built and paid for. They inherited the wealth built up by the previous generations and just needed to maintain status quo.
Now the country needs a new build of infrastructure to support the enlarged population and it is doubtful that the countries productive enterprises like farming and fishing will increase to the same proportion as the population growth.

The fact that Infrastructure is on the cards creates many oppurtunities and kiwis and foreigners. Upskill and join in, or dont. Everyones own choice.
There are many Kiwis that go overseas and take locals jobs - because they are good at it.
If anyone likes a lower or no tax, then dont work = no income = no tax. Its ok, the taxpayers will fund you.

There are no doubt many opportunities for those that want to pursue them. Australia, New Zealand and Canada are 21st century pioneering lands. With their relatively low population and limited history and also being English speaking they represent a very attractive place to set down roots and develop a new culture as well as establish ethnic communities. The old Kiwi way is lost forever to be replaced by something new although some of the old ways will still survive like the accent and no doubt some other quirks.
It will be very difficult to carry on the tradition of Kiwi character and uniqueness and I fear globalism could turn us all into bland, faceless slaves of a New World Order if we let it
It will be interesting to see how it all works out.

Typical Zachary; The old Kiwi way is lost forever - well if you're willing to let the NZ quality of life deteriorate in the name of greed then you go for it Zachary. The rest of us are more willing to make a political stand rather than just roll over.

Well our accent is being increasingly Americanized.

Well I guess there are some benefits ;)

Wouldn't it make more sense to provide more infrastructure support to the NZ provinces rather than just pile the vast majority of the funding to Auckland which I'm guessing is going to support the building of asset units for the overseas investors to purchase and then leave empty.

If there was more infrastructure for areas such as Hamilton, Tauranga, Southland even Wellington. There would be less of a need for us to export our young kiwis and bring in imigrants.

we have had years of government spin pushing immigration, both this government and the last labour. Yet studies are now coming out showing the benefits are not outweighing the non benefits.
the increased costs and lowering standards of infrastructure and Services, which have been allowed to decrease to achieve a surplus, will be passed onto future generations .
as for bringing in more young to help pay for the old. face palm. do they think these young do not age, do they not think they will not try to get their older family members in when they are in.do they think they will be 100% honest to try to enter considering some of the societies they come from.so many flaws it make me wonder if the powers that be are naïve , incompetent or blinded by ideology