Simon Bridges announces Government has commited to spend NZ$1.4 billion to NZ$2 billion to fully restore road and rail corridor along coastal route through Kaikoura; may take 12 months to reopen

Simon Bridges announces Government has commited to spend NZ$1.4 billion to NZ$2 billion to fully restore road and rail corridor along coastal route through Kaikoura; may take 12 months to reopen 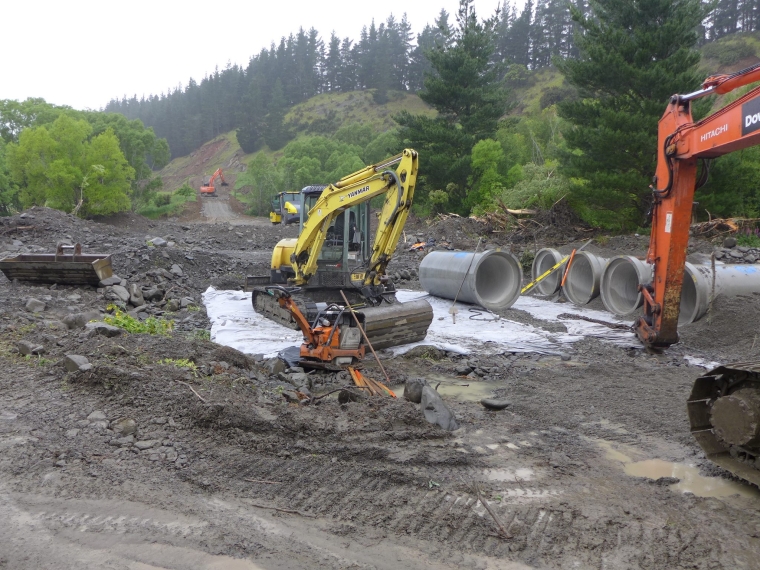 Transport Minister Simon Bridges has announced the Cabinet has agreed to reinstate the Kaikoura coastal route north and south of the coastal settlement.

The existing State Highway 1 and rail corridor along the coastal route to the north and south of Kaikoura will be rebuilt, with additional improvements to increase safety and resilience.

“Since the day of the earthquake, restoring access to Kaikoura has been our number one priority. Agreeing to restore the coastal route demonstrates our ongoing commitment to getting this region back on its feet as quickly as possible,” Bridges said.

“To provide certainty, the Crown will fund the work required. Exact costs are still being determined, but the current estimate is between $1.4 billion and $2 billion. In addition, emergency legislation passed through Parliament last week will cut through red tape, and ensure repairs to the existing route can be accelerated," he said.

An Order in Council was currently being prepared that would accelerate the reinstatement of State Highway 1 north and south of Kaikoura.

Bridges said that even with an accelerated process, there was a long way to go.

“The precise work required to repair the route is still under investigation and it will be a very complex job. However, the Government is confident that limited access via the coastal route can be restored in about 12 months," he said.

“Rebuilding a stronger, more resilient coastal route will give Kaikoura residents the security of a second connection to the rest of the South Island.”

I would be interested to see a detailed cost/benefit analysis on the decision to restore the rail line compared to a RO/RO road/rail link to ChCh.

I assume you mean a rolling highway?

And then there is WGN-CHCH coastal shipping as a further comparison - and an inland route. All should be subject to proper CBA and the results of the analysis made public.

Given likely SLR over the next 100 years, I am totally miffed at any restoration of that coastal route - the Manawatu Gorge slip repair was closed a second time after initial re-opening of one lane due to rock fall. Not sure how these slips compare but I can see that too becoming a real problem at multiple sites along that highway.

The Christchurch EQ recovery and the Pike River Mine tragedy are surely two textbook examples of over-promise and under-deliver. Have they learned nothing?

Initially I meant just considering the option of a freight only RO/RO service to CHCH. That rail line has always been dodgy and a freight only service to CHCH would take the rail and freight trucks out of the picture leaving a larger lump of real-estate on which to build a more resilient road. If I understand you correctly, you are questioning the road also and I take your point about the long term slip stability. The road is a hard one because the alternative is far longer and then you have the politically hard option of telling the poor folk of Kaikoura that you are going to close down there town, but then that is why they are paid the big bucks. I suspect that they will rebuild the existing road almost without too much thought. Long term do you go on to invest in concrete roofs and wall to let the slips pass over the top or just put up with the ongoing repair costs that will inevitably occur occasionally.

Bear in mind each billion only equals 1.000 Auckland houses.

kneejerk political reaction. by all means repair for now at the cheapest cost BUT
what should be done is look into all options for the main highway in the south island.
is the coast the best place for it, or is their a better route, sometimes you can improve on the past something this government seems reluctant to ever do

Not a lot of choice

Why? Are the farms particularly productive? And how damaged is the land in the wake of the quake? I read one article where an aging farmer lamented the fact that he had just got on top of his land such that he felt the property could be sold, but post-quake it was a mess - in a condition no one would want to purchase.

I suspect we have developed a great deal of truly marginal land where ag production is concerned - but having made these mistakes doesn't mean we have to keep pouring money, energy and effort into it forever, surely. I'll bet there are many a quake-affected struggling landowner that would happily retire to the city if given the means to do so.

I suspect the most important economic aspect of that road/rail corridor previously relates to its place in long-haul transport and that there are lot's of other ways to solve that. But as far as I can see, none of these alternatives or cost/benefit considerations have been made. Why do we keep thinking that the old way is the only way.

Our declining productivity stats should be speaking volumes to government - yet they appear bereft of ideas.

yes,interesting that now they are hiking the electricity line charges in areas where the cost of reticulation is high but not applying the same logic to the cost of state highways.the dairy farmer who had a go at english is expecting us all to hurry up and spend 2 billion to get his milk to fonterra.

Not to mention just how much more profitable Fonterra might be if it applied a similar cost structure around supplier collection. And what benefit to our waterways more generally as well as there would be no incentive to intensify the outback and beyond.

The new Prime Minister and his Government being the owners of Kiwi Rail should request a full feasibility from Kiwi Rail on the benefits of using coastal shipping, as they do now with their NZ CONNECT service from Auckland to Lyttelton. It is an absolute waste of taxpayers money to restore the Picton to Christchurch rail line. Tax payers already have to subsidise Kiwi Rail to the tune of $250 million a year. What benefits are NZ taxpayers gaining from the restoration of a rail line between Picton and Christchurch that mainly carries freight. Are we in fact subsidising the freight companies using that service? Coastal shipping is the answer. It doesn't cost the NZ taxpayer, its economic, socially acceptable and the most environmentally friendly form of transport.

With the catastrophic effects the seismic events have had on the road and rail network between Picton and Christchurch combined with the Kiwi Rail review and re tonnageing exercise it gives the current Government a real opportunity to lead the change required to Inter Island transport. This change should provide alternatives so in future we are not as reliant as we currently are on road and rail.

So what needs to be done?

Trains and rail ferries cannot move goods this way, with only one dimension typically available plus the additional length and dead weight of rail wagons.

Put bluntly, moving unitised freight by sea on rail wagons is a clumsy, costly and an obsolete concept.

Therefore, investment would be required in container carrying vessels that can utlise existing ports and crane facilities. These types of vessels are plentiful and can be chartered or purchased. These vessels in the first instance can operate between Wellington or Auckland and Lyttelton but expansion to other North or South island ports should also be considered.