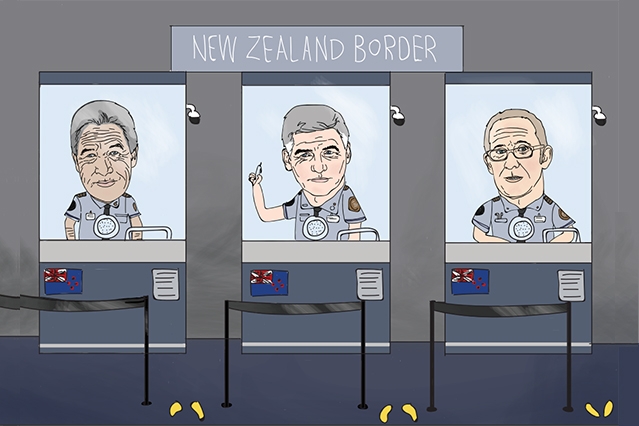 Net migration and Auckland's housing and infrastructure pressures aren't getting any help from one of their key drivers.

Australian wage growth remained stagnant at a record low during the March quarter, with economists warning that it, along with high 'underemployment' levels in the Lucky Country, will mean paltry pay rises over there for some time to come.

Back in February, Interest.co.nz drew readers' attention to the link between the Australian labour market and pressures here in an article entitled 'Auckland's housing market is not going to be getting any help from Australia's flat-lining labour market any time soon as net migration levels to NZ look set to stay high'.

The Reserve Bank of New Zealand openly admits that it struggles to forecast net migration inflows more so than its other projections.

But it does have confidence on one thing. There is a strong correlation between the relative state of the Australian and NZ labour markets and unemployment and wage pressures here.

A weak Aussie labour market indicates more Kiwis will return from Australia (mining sector and WA wages both fell in March), fewer will leave to go over there, and other migrants are more likely to look to New Zealand than Australia.

This means those high net migration numbers aren't going to go away any time soon.

The 0.5% q/q rise in the wage price index (consensus +0.5%) left the annual growth rate at the record low of 1.9% reached late last year. Private wage growth stayed at its record low of 1.8%, while public wage growth rose from 2.3% to 2.4%. The RBA is hoping that wage growth will be driven higher by the improvement in the mining sector and rises in commodity prices. But wage growth in Western Australia fell from 1.4% to 1.2% and in the mining sector it slipped from 1.4% to 0.6%. The problem is that the high underemployment rate means businesses can get away with paltry pay rises as they know someone else is willing to do their job. With consumer prices having risen by 2.1%, real wages have declined by 0.3% in the past year. Wage growth may edge up later this year as the labour market improves a touch, but it probably won’t be higher than inflation for another few quarters.

Overall, subdued wage growth supports our view that underlying inflation will remain below the 2-3% target for a year or two yet and the squeeze on real wages suggests that the slowdown in consumption growth is just getting going.

"More Kiwis will return from Australia, fewer will leave to go over there, and other migrants are more likely to look to New Zealand than Australia. This means those high net migration numbers aren't going to go away any time soon"

You talk as if we have no control over immigration numbers. If more Kiwi's are returning home and more Aussies are coming here then we adjust and let in less international arrivals surely?

No, it's all Nationals fault

On a side note was in a Queenstown store yesterday and overheard a Indian guy explaining to other internationals working in the store how to gain residency in NZ. He said to enroll in a university course for 1 year and after that you could apply for residency. The cost was around 14,000 ( full fees ) and it didn't matter if you passed your course or not.
This is allowing universities to sell citizenship. Someone please tell me this isn't true?

Funny......where there is a will there is a way! Some people will never understand that when you have rules, you create innvotion to get around those rules........it is the poor tax payer who gets duped time and time again...government funding to the uni's, missed out on charging for admission to NZ........but you will get someone who's prepared to learn the system so bet they do well too!

But if you dont have any rules its a mad free for all. Lets see post Great Depression rules and regs were put in place to prevent a re-occurance, in comes Ronald raygun, does away with teh rules and followed up by Bushie to make sure any rules left are not enforced and then we get a GFC.

I know which Id rather have thanks, the rules and start jailing the "innovative" ppl who try and get around them.

You miss the point entirely, the innovative are not breaking the rules, they are operating within them or around them. There are very few rules that can ever properly cater for all circustances that arise. We can produce thousands of page in a document and still not cover all possibilities and this silly system keeps on going because some people incorrectly think they can control everything and everyone........what we have now is a mad free for all of rules.....all of which are conflicting somewhere else.......Who would you jail? And on what grounds could you possibly jail them?

No, I understand your point. My point is the loopholes then need to be closed. I can fully accept that the rules/regulations cannot be 100% watertight. The very point is they can be made good enough that they are effective, no rules on the other hand can see the same "innovation" / abuse as a free for all and that is an even worse outcome.

"Jail" interesting Q and not easy to answer. I think there has been IRD cases where a tax avoidance entity has been brought into existence purely as a tax evasion vehicle and for no other purpose. For me I'd be jailing the participants and the "professional" advice they got. So I'd have tax lawyers and accountants doing jail time for this offence, say 2 to 5 years.

Ah yes, that rules/no rules thing, I wonder which of those would have had the most influence at Pike River

I take it the university referred to was the New Zealand arm of Nigerian Princeton.

The one where the vice chancellor drives a Ferrari

I wish someone could tell you otherwise but that is true in all respects. Store owners irrespective of size can identify their store operators as retail managers (a 2nd grade skilled occupation) and apply for residence.
Apparently, our own people aren't skilled enough to hand out change and restock shelves at corner stores. And you thought only tradies and IT professionals were needed in our country.
There maybe some relief from this scam ahead with the $49k threshold on income.

ah you are assuming that the wage on the books will not go up to 50K, win win way of getting profit out of the business as cash in hand, less tax to pay.
of course we know that wont happen (kick backs) as they wouldn't dare break any NZ laws otherwise you might cop a slapping wit that wet bus ticket

So we have floods of Non-Kiwi's coming into the country, and it's problem when citizens Kiwi's come home from Australia. Sorta backwards.

Employment in the mining sector and WA hollowed out quite some time ago. Considering most h'holds have the equivalent of less than 6 months of income in the bank, there is every chance that those who need to return would have done so by now.

Funny how immigration levels remain high despite labour market contractions on both sides of the Tasman. On one hand, decreased economic activity is recorded due to lower private investments and on the other businesses continue to have enough capacity to hire more immigrants.

Australia's wages may be flat-lining but they are flat-lining at a level 30 per cent higher than ours on average. Commentators often seem to believe the government's spin that our economy is doing better than Australia's. I'll believe it when wages here catch up to those in Oz — as John Key promised they would in 2008. Or when our productivity matches theirs.

... we want to compare ourselves to Australia , God Bless them ..

And set up detention centres off-shore for refugees and victims of people smuggling .... and Kiwis who've broken the law ...

.. and to cr*p all over our next door neighbour whom we cherish as an ANZAC ally .. at footy matches ... but whom we dismiss out of hand at all other times ...

Yup ... let's emulate those fine upstanding bastions of humanity , those acceptors of cultural and sexual differences , those all encompassing lovers of other religions and skin colours ( ahem : cough cough , ha ha ) ....

Yes we are quick to knock Australia but the fact is they have been doing better than us since I can remember. Also its not like our wages have gone anywhere fast in the last 30 years and it feels like they have gone nowhere in the last 10 years. Why do you think we get the daily frustration on here about house prices ? What does happen over there however if things go bad is they put the boot into the Kiwis first and you cannot stop anyone with a NZ passport coming home.

Sounds like you need to take a leaf out of your own book and stop crapping all over your neighbors. Do you really know anything about Australia/Australians? If you did you would know how xenophobic you sound.

3 major infrastructure projects in Aus come to an end this year with no new ones starting.It is estimated up to 8000 Kiwis are on these.

Over there its the 457 visa thats rooted it!

And although they say CEO above, its right through.