National leader Bill English not giving much away ahead of talks with New Zealand First 'to show the respect to Mr Peters'; Plays down Super saga leak speculation

National leader Bill English not giving much away ahead of talks with New Zealand First 'to show the respect to Mr Peters'; Plays down Super saga leak speculation 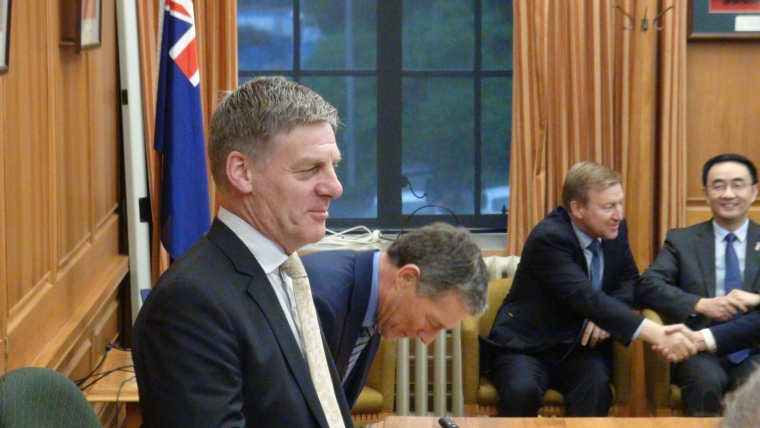 National Party leader Bill English is not giving much away ahead of talks with New Zealand First, saying he is keeping mum on potential aspects of any coalition agreement out of respect to its leader, Winston Peters.

The plan from National is to make contact with New Zealand First over the next few days, with calls having taken place between staffers trying to find a suitable time for a meeting between English and Peters. English said he was not concerned about the pace the situation was moving at.

Fronting to media on his way into National’s first post-election caucus Tuesday morning, English was largely asked about speculation that Peters held National insiders responsible for leaking his Superannuation over-payment details during the election campaign.

Other senior caucus members, Paula Bennett and Steven Joyce, were also asked about the subject, both denying any involvement in any leak. English also defended his retiring chief of staff, Wayne Eagleson, over the matter. Anne Tolley had also been briefed on the over-payments.

Asked how much Peters’ suspicion that the leak came from the Beehive could impact coalition negotiations, English said he didn’t expect it would have an effect, and that any differences would be put aside with eyes on the main goal of forming government.

“There’s all sorts of political pushing and shoving that goes on. We now have the responsibility of forming a strong and stable government,” he said.

Meanwhile, another issue put to English was his description of Peters on Monday as a political “maverick”, which according to reports didn’t go down too well with Peters. “I’m not worried about that,” English said. He said he’d known Peters for a long time, and had been in Parliament with him for 27 years.

While there might be some differences of opinion, English said he’d always been clear that he understood Peters' role, “given the result of the election.” Peters was an experienced politician who also took his role very seriously, English said. He said it was now up to political leaders to form a government as indicated by the election result.

“Winston Peters knows that as well as anybody, and I’m quite sure that he takes that role…seriously and responsibly,” English said.

National winning Northland off Peters should not hurt the relationship between the two parties, English said. Reports have suggested New Zealand First might want National to agree on an electorate deal for the next election as part of coalition negotiations.

English said he wasn’t going to answer any questions on aspects of any coalition deal between National and New Zealand First. “Because, I want to show the respect to Mr Peters.” English said the negotiating process would be constructed in a way that would suit both New Zealand First and National.

It is thought that Trade Minister Todd McClay, whose father Roger was a close associate of Peters, will be involved in National's team, as will Gerry Brownlee. McClay wouldn't comment on the process on his way into caucus. Meanwhile, National deputy leader Paula Bennett did not seem bothered about whether she'd be part of the negotiations, even seeming to appear prepared to vacate the Deputy Prime Minister role for Peters if required.

"I haven't spent much time with him, so I kind of don't have a relationship with him," Bennett said of Peters. "So there's nothing wrong, there's no particular relationship." Asked if she was prepared to give up the position of Deputy PM, she said: "I just think the negotiations need to happen, and we'll discuss what happens at the end of it." Bennett said she was "not too bothered, to be honest. I love what I do, I'd still be deputy leader of the party - that's the main thing, really."

Bennett was asked whether she was staying out of the negotiating team because Peters suspected her as potentially leaking his Super details. "No, not at all," she said. "I just think he's got better relations; as I say, I just don't have a relationship with him, and I'm sure he'd rather negotiate with people that he knows.

English then addressed the National Party caucus, saying the campaign they ran had been disciplined and purposeful. “We had some times of real pressure,” he said. “The public had the opportunity to vote for other parties, in particular the Labour Party, to put them clearly into government. They decided not to do that.”

Labour also held its first caucus meeting after the election, with Ardern thanking her team for their efforts. No mention of potential government formation while the media were present, although she’s due to hold a press conference later Tuesday afternoon.

The title of this says English is not giving much away, but Im guessing by the end of negotiations he will be....

The title of this says English is not giving much away, but Im guessing by the end of negotiations he will be....

Don't do it Winston - the Nats will shaft you within 6 months with their dirty politics team.

The cost of the early election will be blamed on you and NZ will believe their world class lies.

"English is not giving much away".. LOL, basically he can't because he is not in the driver seat !

After eight Budgets these people portray themselves as sound economic managers.

The pose as people to be trusted with the nation’s purse strings – and they have claimed to ‘magiced’ a surplus.

Any fool can magic a surplus by not spending on critically essential items of public need.

But that’s the thing.

Budgets are meant to be springboards for a philosophy but this National Party has none aside from staying in power for as long as it can hang on.

Meanwhile the headlines scream out for the government to act on so many issues, in so many cities, and so many regions.

And the need of these cities and regions is billions and billions of social and infrastructural deficit.

This government has made countless promises and has failed to perform on every one.

Our land and business assets are getting stripped out and sold to foreigners.

We are increasingly a branch economy of China.

One belt, one road but so many unanswered questions.

They’ve got their priorities upside down......

It's quite entertaining that Nationals great poll results might become meaningless given that if they are to form a government with NZF - Winston has them by the balls and clearly dislikes a number of their policies (and party members) that made them so popular with those voted for them. It would be a very hollow victory..From a National supporters perspective, wouldn't it be better for the party you voted for to stay true to their policies (and values), than to bow a knee and pay homage to a party whose values that you didn't vote for in the first place? (Is it not best to lose but remain true to your values, than to win but to corrupt the character of what you believe in and voted for?)

Fair comment but you and everyone else will know what the billshitter will do. The instructions arrived from Beijing on Sat night. Probably hand delivered by the guy in the right of the photo above.

"From their fruits you will know them" Mathew 7:16

Does rather sound as though he'll go with labour/greens.
Last hurrah.

Don't give anything to Peters.nzf are struggling to breath now,it's only a matter time before the resuscitator is turned off.
Do not at any cost revive this party.
They have had their day of holding NZ to ransom.End the lolly scramble now.

I think a minority govt is looking more and more likely. Both sides would simply have to give too much away to satisfy Winston.

Do keep up, Alex!
Everyone knows it was Winston himself who leaked.
He knew he wasn't getting any traction so he manufactured a story.
And he was right about the lack of traction.
That's why his vote went from 8.7% in 2014, to 7.5% in 2017.
His bottom line with Bill will be to guarantee that he won't be outed for what he did.

Wintson said to the media I will deal with Party that has the largest votes, and I will put country's best interest at heart give some time.
Today we here that Winston is on revenge path against English, Joyce, Bennett.
Personally I think Mr Peters needs to be in a rest home , grumpy old bugger.
Will revenge distort Mr Peters I will say yes.
If Labour Greens NZ First go this 3 years it could be the last time for many years , what a circus
Will Winston die or retire before next election?
I see Jim Anderton approx. 79 yrs is very frail

Who could possibly trust English, Joyce, Smith & Bennett? they are sharpening their knives as we speak.

Peters is going to have a lot of fun with them to get more out of labour. Pay backs

If it is a Labour/Greens/NZF coalition we will have another Election within 12 months.

What he actually said was -

"No, I've said in the past that there's been in the last 21 years an emerging convention that you start with the party that has the most votes," Mr Peters replied.
"But that's only a convention. It doesn't mean that's where you end up, for obvious reasons. You've got to get an agreement in what you're going to do," he said.

'Whatever Patrick Gower and the Newshub producers are on, they should get off it.

Their TV news broadcasts about New Zealand First the last two nights have been fiction, and grossly misleading. I will not be explaining what parts are fictional. Some of it is barefaced lies.

Newshub is claiming sources that don’t exist, and is merely toying with viewers and presenting make believe instead of facts. It’s the very worst form of journalism and Newshub is not the only one doing it – sad to say.
None of it will have any bearing on New Zealand First in the coming talks around the establishment of the next government.

This is going to be so good, how nice to see the dirty tricks national party have to squirm to Peters.
They thought they were so clever with their lies and dirty tricks they've been pulling left right and centre for a number of years, those dirty tricks might be starting to come home to roost now lol

How about National/Greens would save all this hazzle