There's a lot of interest from various parties in Auckland’s light rail network, but neither the Minister of Transport or NZTA will say where the interest is coming from

There's a lot of interest from various parties in Auckland’s light rail network, but neither the Minister of Transport or NZTA will say where the interest is coming from 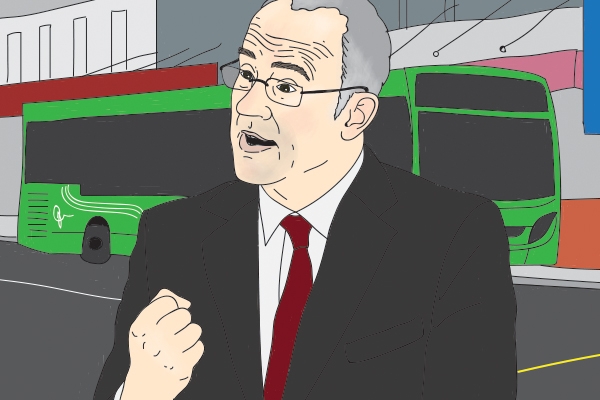 Transport Minister Phil Twyford says the $6 billion Auckland Light Rail project has turned a lot of heads in the private sector but won’t say where the interest is coming from.

“There is a great deal of private sector interest in the light rail project,” he says.

The Government launched the procurement process for the project in May, seeking parties to partner with in funding the light rail link.

The New Zealand Super Fund indicated its “strong interest” early in the process, with its chief executive Matt Whineray saying the fund considers the project to be an “attractive prospect for investment.”

But since then, Twyford and the New Zealand Transport Agency (NZTA) have been mum on any other expressions of interest in the project, except to say there has been a lot.

Asked for more details on the interest, Twyford says he’s unable to provide them – “other than to say NZTA have had a lot of discussions with potential investors and suppliers.”

Similarly, NZTA has been reluctant to comment on which parties have shown interest in the light rail contract.

“The Transport Agency has had many requests for information from organisations wanting to find out more about the project, with an interest to being involved in the delivery of light rail,” NZTA system design manager Brett Gliddon says.

“In the interim, the Transport Agency will work together with its government partners to consider any potential investment proposals.”

NZTA did not answer questions asking how many offers of investment it has received from potential partners, or where they are from.

Twyford says the Government will be taking its time to make sure it finds the right investor.

“We’re going to take a little while to do the market soundings, to talk to Public Private Partnership (PPP) investors and others on precisely how we procure and contract the light rail project.”

He says one of the things officials have learned from talking to people involved with light rail projects overseas is that it’s best to invest thoughtfully upfront to get the deal structured in the right way.

“Then you save yourselves problems down the track.”

In the past, Twyford has estimates the project will cost about $6 billion, making it the biggest transport project in New Zealand history.

In its  10-year transport plan for Auckland, the Government earmarked $1.8 billion in seed funding with the option of securing private investment for the light rail project.

Let me guess, it will be from the mother land? Possibly their ultimate plan to integrate it into their trillion dollars Silk Road (One belt One Road) project.

Good exciting times ahead! If it is anything like the other OBOR "investments", it'll be a Chinese company bidding for the project while another company from there funds it.
So the net result would be money flowing back to China, with which those high net worth Chinese will buy up property along the rail corridor and the NZ public will be left to pick up the tab for the foreseeable future.

Yes, correct and I was thinking somewhere along the line of the massive debt owing, it might be a good swap for the Devonport Naval base..

We'll be like the Irish eating potatoes and while they eat strawberries and avocados off our arable land.

An old English word, that is back in vogue , if you dont know what it means , look it up !

It's those bloody Croatian investors again isn't it. I knew it.

I wonder if Fletcher’s is one of those companies - would make the recent announcement of Kiwirail CEO going to Fletcher’s look a lot more interesting.

Unless the government was going to 100% government fund new public transport infrastructure and all fares were going to be completely free then there was always going to be some private sector involvement. Given the coalition government does not have that sort of 'own all the means of production' communist ideology it makes sense to work out ways to minimise the government subsidy. NB the road network is also subsidised by tax and ratepayers. Only State Highways (a small part of the total network) are fully paid for from road user charges and fuel taxes.

The politics of this is interesting. The far left will want 100% government borrowing as the revenue source and cheap/free fares for some/all. So no commercial viability aspects are considered.

The National party right will be divided. They probably have a secret respect for the commercial aspects of what Phil Taylor is proposing. But their cultural DNA imbedded in the likes of Brownlee and Joyce is to oppose any transport option that involves steel tracks...

It will be fun to watch to see if the government can manoeuvre there way through the gap.

Something radical like fee public transport could be the answer in Auckland. Would it be cheaper to do this and maximize the use of existing roads/rail with more and more and free services?

Has anyone even tried to do a cost comparison?

Its being tried elsewhere -

Phil Twyford.
Transport Minister Phil Twyford says the $6 billion Auckland Light Rail project has turned a lot of heads in the private sector but won’t say where the interest is coming from.

“There is a great deal of private sector interest in the light rail project,”

The Only thing that there is Great Deal of is the BS coming out from this CoLs .... is that the same interest that Shane Jones was chasing to build infra ... where has that Great Deal gone ...?

Why can't they name few of these private parties?

The fact that some have bought the Tender documents does NOT mean that they are going to do it .... this kind of mantra is what comes out of the mouth of loser sales people when talking about pipelines and interest !!

Just another day in the office and another shot of Morphine to their supporters.

Fingers crossed for an additional value uplift levy to be introduced before the the final route is announced.

I would want a targeted land value tax on the private properties within walking distance of the light rail stations. That revenue source can be used to pay off a municipal bond.

When was the last time targeted levy spent on anything that was targeted for?

It all starts well , then either siphoned into another pool or get used in another project ....

The $6B number is news to me ... was this the original cost?

1) The light rail line has a low operational speed - In total this route is around 22.6km and at 44 minutes giving an average of 31km/h. https://voakl.net/2016/01/13/is-light-rail-comparable-to-heavy-rail-to-… is hardly better than the congested road network speed. Thus it is not light rapid transit, but simply light rail. There seems little point speeding huge dollops of money to simply replicate existing travel speeds.

2) As a light rail there are no passing opportunities at the stations. There is no option to build or add express services.

3) As it is light rail there is no option to eventually extend it to the main north / south rail line & serve a southern catchment as well. This would provide redundancy/resilience in the rail network by providing a second route.

5) Using a PPP will simply mean that the net cost to NZ will be higher as a profit has to be built into the total costs. The LR will always require subsidy & there is a limit to the fares that PT users will pay. That means higher total taxpayer/road user funding overall.

It does have the advantage of increased passenger volume over single occupant cars. Having used trams in Melbourne they're really only useful to get a few blocks away from a train station. You wouldn't ever use a tram to get half away across a city.

The only place I've seen light rail work effectively is in Germany where the tracks are underground or overground.

From the details I've seen this is just a big bus on rails. How many bendy buses could they buy for $6 Bazillion?

I just spent 2 weeks in my home town of Geneva which has a tram (= light rail). It's romantic but I don't think it's effective as a means of transport and most importantly it creates havoc with the cars it shares the road with.

You could buy 10 brand new 11 seat transit minibuses for $700K. Run them at 24/7 10 minute departure frequency from central city pickup point via Waterview tunnel to Auckland Airport and back to the city. 40 min average journey time for 30 km. Allowing for fuel cost,RUC's, $1 per km running expense plus $20 per hour for the drivers. If you charged each passenger only $5 each way you would do slightly better than break even.