The risks of further ECB monetary stimulus outweigh the benefits. More stimulus will either amount to less than anticipated or will not be sustained and undermine the eurozone's financial system and public finances in far-reaching ways

The risks of further ECB monetary stimulus outweigh the benefits. More stimulus will either amount to less than anticipated or will not be sustained and undermine the eurozone's financial system and public finances in far-reaching ways 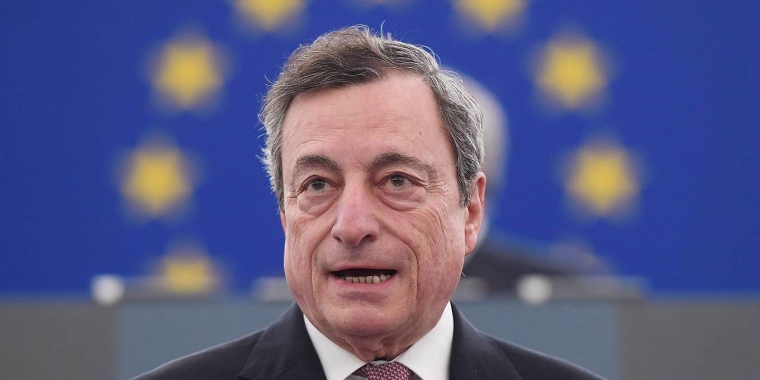 Mario Draghi risks deepening the eurozone’s problems in the final weeks of his eight-year term as president of the European Central Bank. He has promised that the ECB will reduce interest rates further to spur the eurozone economy. But policymakers have room for only modest rate cuts, which will do little to boost growth – and will put potentially intolerable pressure on the eurozone’s fragile banks.

Back in June, Draghi said that the ECB was preparing a new dose of stimulus, including further reductions of its policy interest rate and a renewal of quantitative easing (QE) through purchases of government bonds. And he continued to call for “a significant degree of monetary stimulus” following the ECB Governing Council’s most recent meeting on July 25.

More recently, Christine Lagarde, who is due to succeed Draghi as ECB president on November 1, said the central bank “has a broad tool kit at its disposal and must stand ready to act.” Likewise, Olli Rehn, governor of Finland’s central bank and a member of the ECB’s Governing Council, called for “substantial and sufficient” action. Financial markets thus expect aggressive “big-bang” measures from the ECB at the council’s next meeting on September 12.

The risk now is that the ECB’s measures fall well short of expectations. Governing Council member Jens Weidmann, the president of Germany’s Bundesbank, says the eurozone does not need monetary stimulus. The council’s other German member, Sabine Lautenschläger, recently said that “it is much too early for a huge package.” There is no risk of deflation, she added, and hence no need for more QE. Klaas Knot, the president of the Dutch central bank, shares this view.

The ECB is not a normal central bank. It serves a confederation of countries – a Europe of nation-states – and conflicting interests are embedded in its decision-making. This results in delays and half-measures.

For example, the ECB postponed introducing much-needed QE for two and a half years before finally doing so in January 2015. By then, eurozone inflation had fallen to about 1%, and, despite the ECB’s massive four-year QE program, which ran until December 2018, inflation remains at that low level.

While pursuing QE, the ECB regularly projected that inflation would rise back to its target of “below, but close to” 2%. But, because policymakers constantly threatened to end QE, markets inferred that the ECB was not committed to a sustained stimulus. The euro-dollar exchange rate thus barely moved; in fact, the euro appreciated against a basket of major currencies. Eurozone inflation became “de-anchored” from monetary-policy decisions. The ECB then declared victory and prematurely withdrew QE just as the eurozone economy was slowing down.

The clash of interests among eurozone member states is straightforward. Until recently, inflation in Germany had been around 1.5% per year; in France and Italy, it has been closer to 0.6% (see Figure 1). Lautenschläger is right that Germany is nowhere near deflation, but one more downward shock could push the French and Italian economies there. 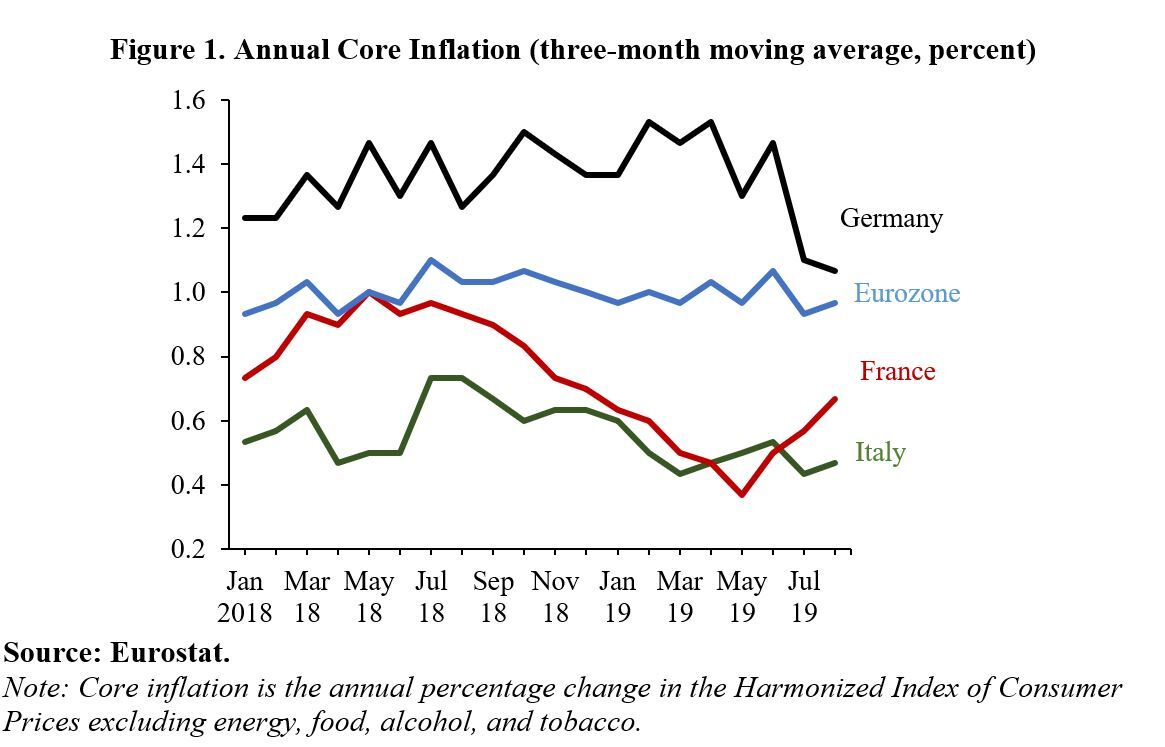 The real (inflation-adjusted) interest rate in Germany is about -1.5%; in Italy, it has been 1-2%. The “significant and impactful” stimulus that Rehn advocates will require pushing interest rates deep into negative territory in Italy and other southern eurozone members with very slow productivity growth.

Even if pushing interest rates deep into negative territory were technically possible, there are political limits to the scope of further QE. For starters, the ECB already holds around 25% of the bonds issued by eurozone governments. Northern eurozone members will be reluctant to buy more Italian government bonds, fearing that they would share the losses if Italy were to default. The alternative of channeling more cheap ECB credits to banks will, as before, prop up “zombie” Italian and Spanish borrowers struggling to repay their debts.

And, as Germany’s population ages, returns on savings have become a major economic and political issue – giving German policymakers another reason to oppose further reduction of interest rates.

But perhaps the strongest argument against further easing is its likely effect on the eurozone’s banks. When the ECB lowers its policy interest rates, commercial banks need to reduce the rates they charge on their loans, but cutting their deposit rates is much harder. Hence, banks’ profits shrink. And bank profitability in the eurozone is already abysmally low because the entire area is overbanked.

The squeeze on profits has intensified as eurozone growth has slowed to a crawl, with some countries now close to recession. Eurozone banks’ market-to-book-value ratios have fallen steadily since early 2018 and now range between 0.4 and 0.6 – well below those of their US peers (see Figure 2). Markets are saying that eurozone banks’ profitability prospects are very weak, and that their assets may be worth much less than the banks believe. Thus, even a modest ECB-induced decline in interest rates will cause significant damage to their balance sheets. And any perception that some governments may need to bail out their country’s banks could tip them into the dreaded “sovereign-bank doom loop.” 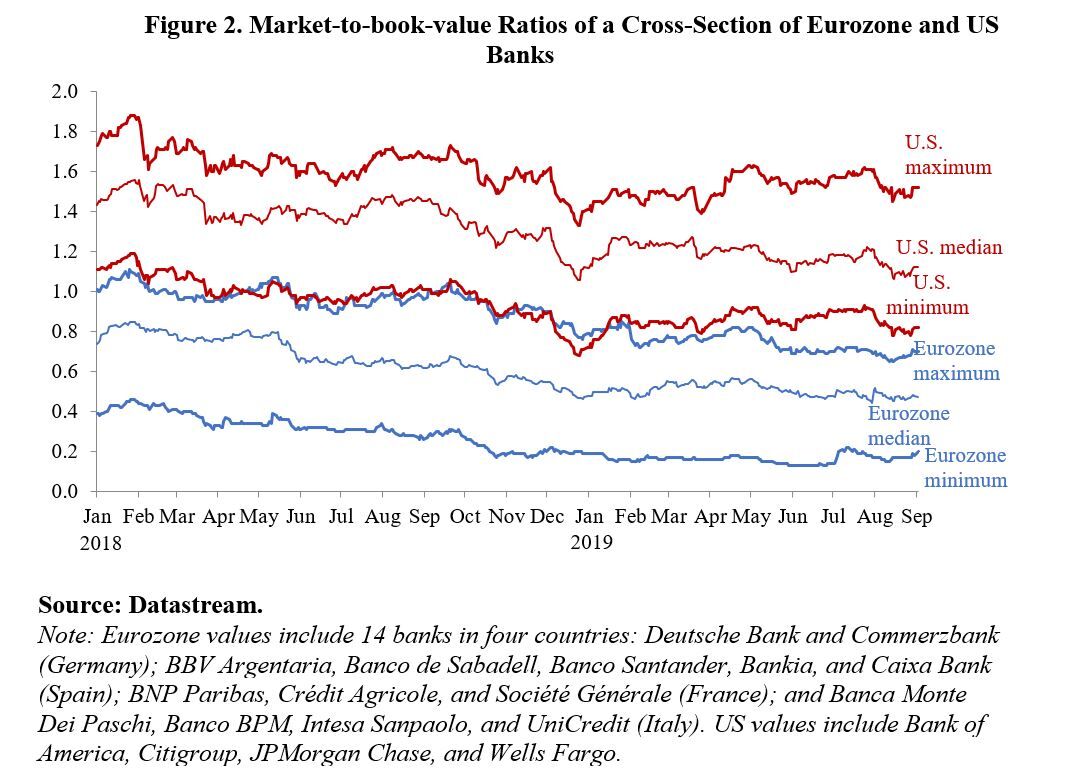 The ECB can do little good at this point, but it could cause great harm. Further monetary stimulus will either amount to less than anticipated or will not be sustained. Yet, the domino effects of a perfunctory and ill-conceived stimulus effort could undermine the eurozone’s financial system and public finances in far-reaching ways.

Draghi, on his way out, wants to leave with one last triumph. But in his eagerness to act when the ECB has no good policy options left, he risks tarnishing his legacy.

Ashoka Mody, a former mission chief for Germany and Ireland at the International Monetary Fund, is currently Visiting Professor of International Economic Policy at the Woodrow Wilson School of Public and International Affairs, Princeton University. He is the author of EuroTragedy: A Drama in Nine Acts. Copyright: Project Syndicate, 2019, and published here with permission.

Dollar Goes Up - Everything Else Goes Down
Read article

They are dammed if they do & dammed if they don't. If the Euro banking system goes under that will undermine the whole EU project & it'll be an every man (country) for himself scenario. Right up Mr Putin's alley, sadly.