From Middle Earth to outer space, New Zealand business has covered a lot of ground in the last 10 years. The Spinoff's Business Editor Maria Slade looks back

From Middle Earth to outer space, New Zealand business has covered a lot of ground in the last 10 years. The Spinoff's Business Editor Maria Slade looks back
17th Dec 19, 2:31pm
by Guest 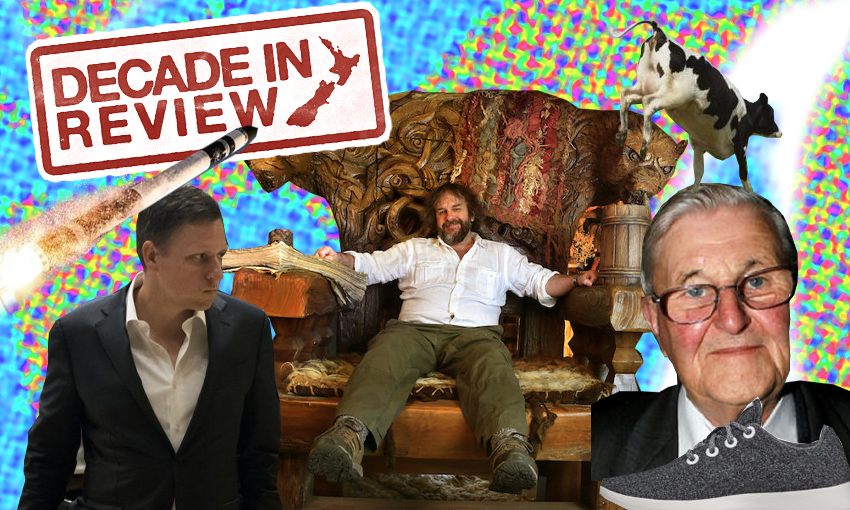 As the world emerged blinking from the chaos of the 2008/2009 global financial crisis, New Zealand began the 2010s in relatively good shape. We’d recovered from our short and shallow recession and our ebullient property market was on the rise again. We still had plenty of cows, tourists and immigrants, and unlike Australia we weren’t changing prime ministers every five minutes. Even the surprise acquisition of a Labour government in 2017 could not dampen the spirits of our chipper business sector.

Sure, Aotearoa faces challenges, not least climate change and the impact of our agricultural industries on the environment. We’ve also suffered our share of tragedies and collapses. But although our businesses may grumble, they head into the 2020s underpinned by a stable government and economy that are the envy of many.

In no particular order, here is The Spinoff’s entirely subjective list of this decade’s business highlights and lowlights.

New Zealand will forever be known as Middle Earth thanks to the efforts of a certain quirky Wellington filmmaker, and the hobbit industry stepped up a gear in the early 2010s with the release of The Hobbit trilogy: An Unexpected Journey in 2012, The Desolation of Smaug in 2013 and The Battle of the Five Armies in 2014. The movies even gave rise to a piece of legislation that remains controversial to this day, the so-called Hobbit law barring film contractors from bargaining collectively. Whether or not you’re a hobbit devotee (fun fact: “are hobbits human?” is a top Google search), the bottom line is the Jackson J.R.R. Tolkien epics are one of the highest-grossing series of all time.

The Uber has landed

Getting around town changed forever with the arrival of ride-sharing service Uber in 2014. As disruptive technologies go, this was about as rowdy as you get. Even the most resistant of us (I’m looking at you, fellow middle-aged curmudgeons) are now hopping in and out of Ubers like digital natives. Uber has become a noun, an adjective and a byword for online marketplaces. It was swiftly followed by other services such as Zoomy, Ola and DriveHer, and its takeaway delivery sibling Uber Eats in 2017. Stand by for Uber Works in 2020. Uber is now in 11 New Zealand cities including New Plymouth and Palmerston North. All hail the sharing economy.

When Ross Asset Management (RAM) collapsed in 2012, people were astonished to discover that a Ponzi scheme à la New York fraudster Bernie Madoff had been operating right here in Wellington. Founder David Ross convinced 900 investors that he was managing an exclusive, $450m fund providing stellar returns of up to 25%. It was all an illusion, and Ross is serving a 10-year jail sentence for his trouble. The charming folk at ANZ fought for three years to keep their role quiet but it’s now emerged the bank allegedly knew the way RAM’s accounts were being operated was illegal. This was interesting news to out-of-pocket investors who are suing ANZ for $75m.

On the subject of collapses, reclusive Timaru moneyman Allan Hubbard ultimately cost the New Zealand taxpayer $600m after his company South Canterbury Finance went belly-up in 2010. To some Hubbard was a would-be Warren Buffett who took horrendous risks with other people’s money, but others remember a humble benefactor of widows and troubled farmers who drove an ancient mustard VW Beetle around town. There remains a lot of support for Hubbard from people who argue he was the victim of an overzealous government that placed him in statutory management.

The curious question of how US tech billionaire Peter Thiel gained New Zealand citizenship despite spending just 12 days in the country is one of the conundrums of the decade. In 2017 it emerged the Trump-supporting Paypal founder had been a citizen for the past six years, only because an intrepid reporter had the temerity to ask whether he needed Overseas Investment Office approval to buy his lakefront Wanaka estate. PM at the time Bill English was comfortable that Thiel should get the nod under an “exceptional circumstances” clause because “New Zealand is a better place with him as a citizen”, even though the venture capitalist and original Facebook investor has expressed no intention whatsoever of actually living here.

It’s impossible to review the 2010s without reflecting on the Pike River tragedy. No one has ever taken the blame for the mine explosions that killed 29 men in November 2010. A Royal Commission of Inquiry in 2012 found a combination of parlous workplace safety and the failure of government regulators to inspect the mine were at the root. Operator Pike River Coal was found guilty of health and safety breaches but was in receivership and could not pay the fine or compensation to the victims’ families. Later the families received a $3.4m payout after the government dropped charges against chief executive Peter Whittall, and in 2017 the Supreme Court ruled the decision to withdraw the prosecution was illegal. As the decade draws to a close, a project to re-enter the mine and recover the miners’ remains has finally begun.

Fly me to the moon

Maybe not the moon, but it is fair to say Rocket Lab founder Peter Beck has come a long way since his days of blowing things up in a Parnell basement. After years of development, Rocket Lab’s first commercial mission was launched from the Māhia Peninsula in November 2018 and seven more have followed. Beck’s vision is to democratise space by creating an affordable rocket that can be launched as often as every 24 hours, putting tiny satellite technology into orbit for all sorts of purposes. The firm is controversial given its US military-adjacency and American headquartered-ness, but still Rocket Lab must be in the running for New Zealand’s startup darling of the decade.

When your products account for 7% of New Zealand’s economy, the last thing you want is a bit of botulism in your whey protein concentrate. The second worst thing that could ever happen to a dairy company (the worst being actual botulism) occurred at Fonterra in 2013 when testing revealed the possible presence of the food poisoning-causing bacteria. The company flew into crisis mode and recalled 1000 tonnes of consumer products across seven countries, but it turned out to be a multimillion-dollar false alarm. Because of the scare, French food company Danone was forced to recall infant formula made from Fonterra products and sued the New Zealand co-op for $232m, a hit that contributed to its first-ever loss in 2018.

Once upon a time in Aotearoa homebuyers had to go cap-in-hand to stern men in three-piece suits to get a mortgage. Then the world went mad. Banks lent people as much money as they could bear, we had a housing crisis, and finally in 2013 the Reserve Bank said “enough”. Thanks to a thing called loan-to-value ratios (LVRs), suddenly New Zealanders needed a minimum 20% deposit to even enter the property game. However, it was the king hit in 2016 requiring investors to have a 40% deposit that really broke the runaway housing market’s stride. Since then our central bankers have tweaked the LVRs a few more times and the market has gone off on various tangents, but with interest rates at all-time lows we won’t be seeing the last of LVRs for a while yet. It’s a bitch if you’re a first homebuyer but just remember, it’s for your own good.

Shoes made out of wool? It’ll never catch on. Except that it did, and now Allbirds are all over your social media feed and the feet of everyone you know. Even former speaker of the US House of Representatives Paul Ryan wears them. Allbirds was co-founded by former All White skipper Tim Brown in 2014, and its signature runners, made from sustainably produced New Zealand merino, have created a new category of footwear and sparked copycat rivals.  The American-headquartered firm initially sold only online to New Zealand and US customers, then opened its first bricks-and-mortar store in San Francisco in 2017 and an Auckland shop this year. The certified B Corp is now expanding into shoes made out of biodegradable materials like eucalyptus and sugarcane fibres.

*Maria Slade is Business Editor for The Spinoff. This article first appeared on The Spinoff and is used here with permission.

Simon Pound's business interviews on The Spinoff are great.

Re SCF, it's not often spoken about, but important to remember that a govt bailout was enabled. Quite unlike invesors in Blue Chip. Too much rural old money you see. Blue Chip was more about the urban investor who had to take it on the chin.

Is Simon Pound the guest they have on TV3s AM Show panel?.
Seems a sensible guy imo.

Quite a state-focused, Left leaning rural bunch we have, really...but come election time there are still the usual rants of "Communists!"

No offence but the spinoffs reportage is the intellectual equivalent of a game of pac man. They never ask the hard questions like...how did inequality become so entrenched in NZ...I'd have to go to North & South where real journos work...

Didn't see the North and South article but I'll have a guess..