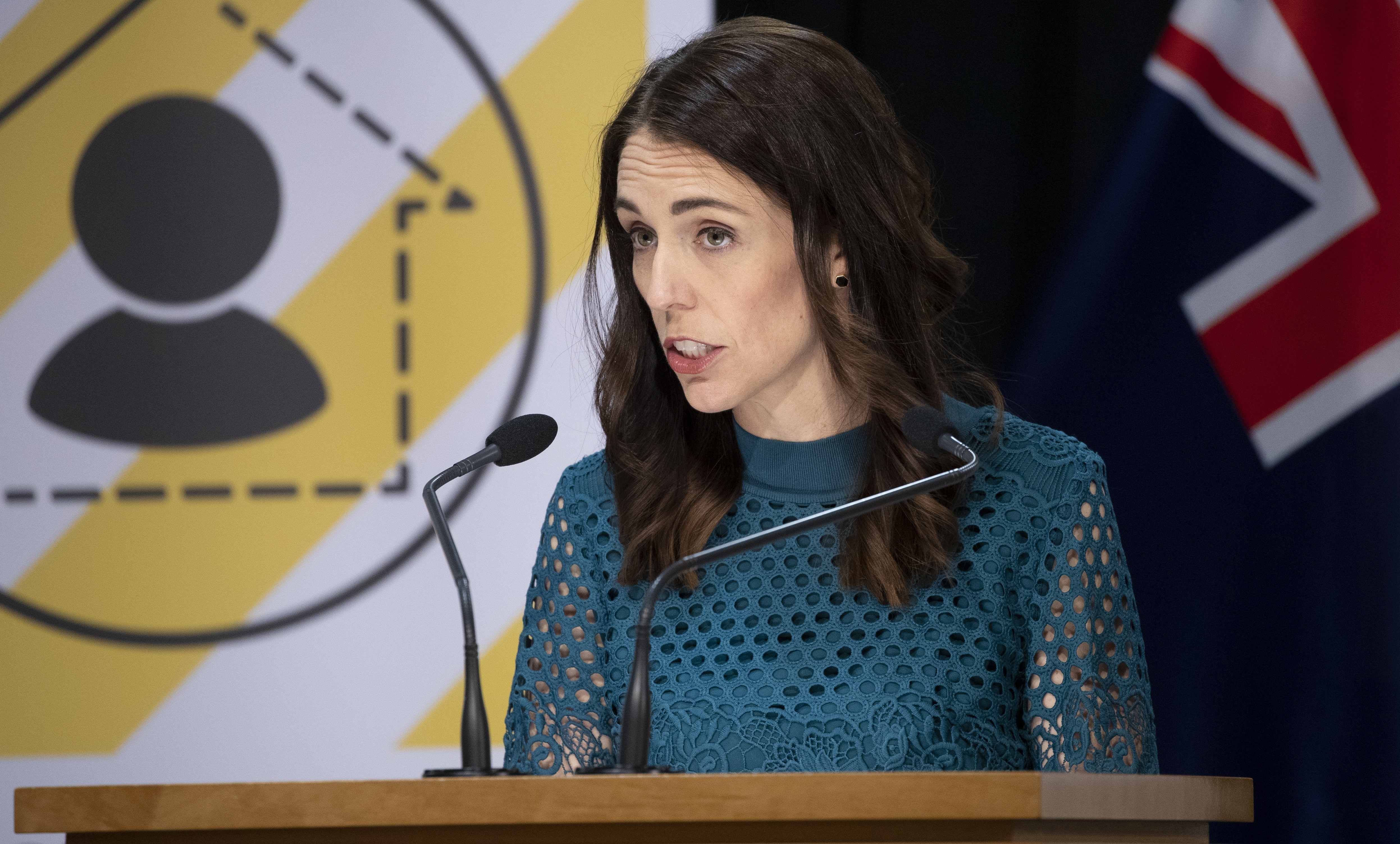 Take note: This person is NOT the government. File picture Getty Images.

The experienced writer knows the dangers of unconnected pronouns such as a hanging ‘it’.

In political discourse the term ‘government’ is often just as disconnected. The writer or speaker may (or may not) know precisely what they are referring to; the reader or listener will be left uncertain.

What does the term ‘the government of New Zealand‘ mean to you? Go on, write it down.

‘The government massively underestimated the number of people who would be returning to New Zealand - and the cost of keeping them in managed isolation.’

Did the term ‘government’ in the sentence match what you wrote down? It did not to the article’s subeditor who chose the article’s illustration with the Prime Minister prominent, the Director General of Health a little behind her and the Minister of Finance lurking further back. (Have you noticed the standard image of the three coalition party leaders striding together is shoulder to shoulder, Peters on the PM’s right and Shaw on the left?).

Of course, Ms Ardern (or perhaps you had the cabinet in mind) did not do the calculations and could not possibly have made the mistake. Nor would she, or any of the cabinet, have checked the calculations. Instead they have trusted the estimates provided to them.

The RNZ sentence summarises a mid-April cabinet paper written by officials in the Department of Customs, the Ministry of Health and (probably) the Treasury. The politicians were relying on them (I mean, the officials) and it was the bureaucrats who got the forecasts wrong.

(It is not the intention of this column to criticise the officials for screwing up the forecasts. The column’s writer is a forecaster and knows how difficult such forecasting is, especially in times such as these where we are operating so far outside past experience. If there is a valid criticism, it is that the cabinet paper does not give enough cautions about the wide margins of error in the forecasts.)

By the time the RNZ report was relayed into the blogosphere, much of the commentariat thought the item was referring to a forecasting failure by the politicians. It is easy for those at the end of the spectrum which supports the Opposition to blame the cabinet for failures by officials by referring to ‘the Government’. (It happened when Labour was in opposition too.)

The consequence is that we often have a foolish public discussion, well-illustrated by the Simon Bridges’ stance, that he did not really disagree with policies of the current government but his party would implement them better – with the same bureaucracy of course.

It is instructive how little we know about the relationship between politicians and officials. When the cabinet announced they were proceeding with the airbridge with the Cook Islands – this was before the current Covid outbreak – Bridges’ successor, Judith Collins, complained that it was not immediately implemented. But the effect of the cabinet decision was to give the officials the go-ahead to develop the protocols necessary to implement the decision. (They are especially complicated because it involves Cook Islands officials and, ultimately, the Cook Islands cabinet.)

Only in fairy tales does the queen snap her fingers and things immediately happen. In those tales, the implementation is perfect, even if it is an entirely new process. The reality is that mistakes will be made, which everyone will criticise with hindsight. One would be more impressed by the critics if they made their points with foresight predicting the failures; they are not that clever.

The result of this ignorance is that there is very little public consideration given to the adequacy of our state services. Yet the Ardern-Peters Government soon found that the bureaucracy had been so run down over the preceding decade that it had little capacity to respond to the things that the new government wanted to do. For instance, the Ministry of Business, Innovation and Employment did not have the ability to cope with the demands for a Provincial Growth Fund, which is one of the reasons why it has not performed as well as one might have hoped.

Another complication is that ministers can be so ineffective that they are led by their department rather than leading – giving it direction – which is the role of a minister. Typically, there are only a handful of ministers in any cabinet who are really in charge of their portfolios. Far too many are make-weights.

Leadership is the critical role of the minister. Consider the odd response of Judith Collins, who said during the election campaign that the Director General of Health should run the Covid response independently of the politicians. As is evident from the Jac and Ash show, the DGH gives expert advice but it is the PM (practically after consulting with her cabinet) who makes the major decisions (which may involve factors on which the Ministry of Health has little expertise).

It is constitutionally absurd to expect the DGH to take such decisions, and as a lawyer and one of our most experienced cabinet ministers, Collins must know it. One assumes that she was relying on public ignorance of the niceties of how a government operates, which leads to silly commentary and misunderstandings of what is happening or what could happen.  That is why one needs to be so careful to avoid that disconnected pronoun in one’s writing and thinking.

PS. My disconnected pronouns have been reduced by a very helpful editor.

The organizational structure and group culture adopted to deliver activities have been a forward indicator to the mishaps, miss steps and stuff ups.

Hint, anything MoH has been involved as, as operations operator.

I think you didn't understand the point of the article.

I totally reject the premise of this article.

Leadership is about applying your own layer of judgement. This can include common sense, scenario analysis, and questioning the assumptions of the data that is presented to you. Leadership is not about receiving a ream of raw data and spitting out a canned response.

In the case of this specific example, it could be a case of "yes, their forecasts are X, but the consequences of them being wrong are Y, therefore we need to prepare for this outcome."

Yes plan for the worse, hope for the best.

completely agree with you. There is also the fallacy of having leaders without any technical knowledge of the area they need to lead. They do not need to be stand out experts of their subject matter, but need to competent in that area. How can you lead, if you do not even understand the information, what it means, its limitation etc. You are simply a stamp if you are unable to challenge the information. This goes for as low as company directors. They have to know their business, their industry to be able to make decisions based on information provided by others. I do not know how ministers are exempted.

Auspicious timing of a 'the last lot running down the bureaucracy is to blame for poor policy execution' CoL support article, given the current border administration shambles and lame excuses. Easton is aware public service productivity has been chronically poor for decades under all governments and that the latest ramp up in numbers is not moving the dial. Ardern knew about these delivery limitations yet forged ahead announcing 'transformative' policies and a 'year of delivery'. As did Jones when setting up the PGF. Which raises a question of integrity.

Excellent. Media and most of public not interested in distinguishing or learning about, how governments decisions are implemented, or not. What happened to administration and public sector contracting in particular, in the 1980s in most OECD countries is totally below the radar of scrutiny (not that v much at all is properly scrutinised in an inane media focused on spectacle, not words and meaning transmission.) Contracting out to private sector is supposed to be the acme of efficiency and process. Look at Victoria guards for that. DoH in NZ and Uk relying on private sector contractual methods, like prisons rely on Serco, and even when crap, they get contracts renewed. This was all to do with reducing State employment re prejudice of ideology. Hence Public Health readiness (everywhere except State dominated admin in Taiwan, S Korea and China) was always going to be rubbish and found wanting, as it has been. The "WHY" of debacle fo testing etc, is never asked, just lazy accusations against present administration. People and governments choose to ignore needed investment and choose instead naive ideologies and New Public Management creed. This is now in stark relief but media cannot be bothered to explain it because they have spend years cultivating silly younger viewers with attention span of a gnat that advertisers want. This is why we are in critical need fo a public service broadcaster. But even then, public have to want to explore the matter. Some hope. Democracies seem to decline precisely in proportion to their success and the inherent complacencies of their pop.

"the Ardern-Peters Government soon found that the bureaucracy had been so run down over the preceding decade that it had little capacity to respond to the things that the new government wanted to do." In my experience, one of the biggest capability gaps (albeit with great exceptions in some departments), is that many officials still cling to the NPM they know (New Public Management), despite its death knell. The shift to outcomes thinking still lags long behind outcomes science, with many departments simplistically using the language of outcomes and effectiveness and relabelling NPM targets as "outcomes". Even Bill English couldn't prompt a genuine shift. Doubly sad, because (pre-NPM) NZ was a world leader in outcomes in government, with officials assisting OECD on global stage. Genuine outcomes were gutted by Clark and Key governments in favour of the then latest fad of NPM-targets. Some older officials who recall pre-NPM, and the youngest not polluted by it, will get the public service back to a genuine outcomes-orientation, eventually.