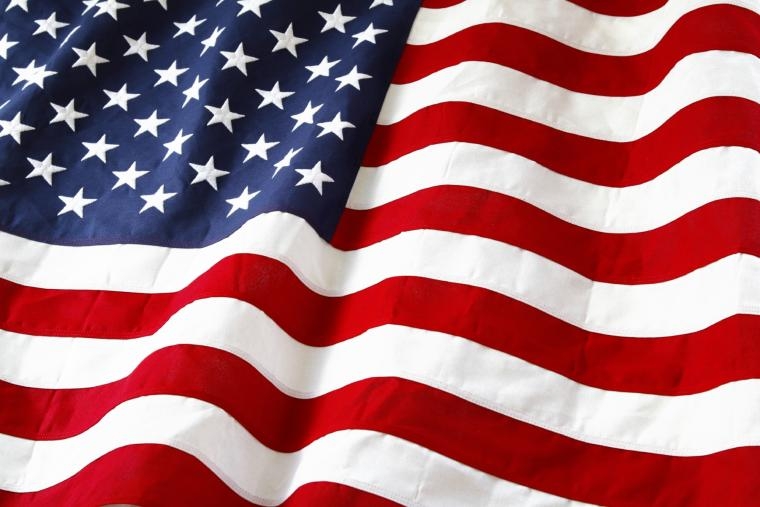 Fresh from seeing off our own national election, it’s almost impossible for New Zealanders to ignore a more blustering voting vortex sweeping in from across the Pacific.  For investors, an initial reaction might be to batten down the hatches.  However, it’s first worth exploring the potential economic and market impacts, whether it be Donald Trump or Joe Biden who emerges from the eye of the storm.

The latter stages of a factious election cycle

Following the 2016 elections, the US entered a period of above-trend economic growth which was reflected in mostly-buoyant financial markets. Since then the backdrop has been a heated political environment and a widening of the partisan divide.  Now Americans prepare to vote again, already fatigued from Covid-19-induced shutdowns and civil unrest across the country.

Amid a significant dose of rhetoric by both parties, it has been challenging for investors to cut through the noise and work out the realistic economic and policy outcomes. The Democrat camp, led by Joe Biden, promises a return to “civility”, trade relations resembling the pre-Trump era, and government as a stabilising force in America - albeit with higher taxes. Donald Trump says that if given a second term, he will finish what he started, which is an ”America First” platform of deregulation and low taxes - all focused on domestic economic growth.

Some key points to note are as follows, drawing on insights from Mercer colleagues in the US:

Hold on to your hat

As demonstrated by the 2016 US election, as well as the UK Brexit referendum and the 2019 Australian election, voting outcomes can surprise the majority of pundits.  With that experience to draw on, financial market volatility may well increase as the election approaches and asset prices attempt to digest possible policy changes.

Hedging equity exposure is a potential strategy for relatively sophisticated investors with low risk tolerance as the year comes to an end.  However, buying “put options” (financial instruments which give the ability to sell an asset at a specified price) around the election is likely to be expensive.  As shown in the chart below, the price of a one-year put option on the S&P 500 Index remains elevated.  Of course, Covid-19 plays a big role in this, but options around the election tend to price in high levels of volatility. That, in itself, is a signal of the level of market uncertainty. With mail-in voting being scrutinised and possibly litigated, as well as any number of other challenges to an outcome, it’s possible that the election results may not be ratified until after the New Year, thereby keeping markets on edge.

Recent polls and betting markets give an edge to Joe Biden (see chart below). The probability of a Democratic sweep in November has increased since early March. The House will likely remain under Democratic control, and polls suggest a rising probability of Democrats also gaining control of the Senate. 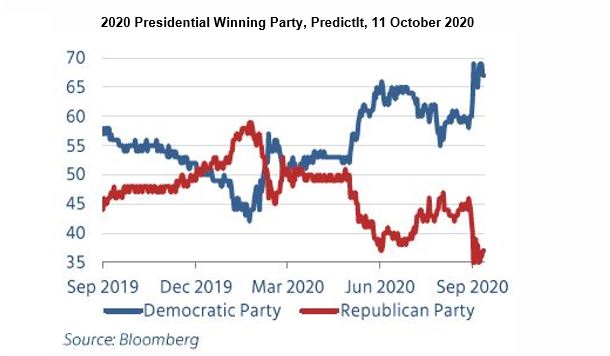 If there is a Democratic sweep, markets would like the prospect of fiscal stimulus and predictability, while opposing the potential for higher taxes. However, many investors agree that a “mixed government,” where the House, Senate and Executive Branch are not controlled by a single party, would be a favourable outcome because of the inherent checks and balances against too much of a pendulum swing in either direction.

The US election is just one of many factors that will affect the direction of markets over the next few months and beyond.  We would be wary of suggesting that investors should make portfolio changes based primarily on forecast election outcomes, given the difficulty in assessing how markets might respond.  That said, we can summarise what the key impacts may be, depending on which party comes out on top.

To sum up, the US election is a hotly-contested process, filled with political intricacies which are alien in many respects to us here in New Zealand.  However, we are far from immune to its ramifications, and this is particularly the case for investors holding assets either close to home or abroad.  Without doubt, the US election ramps up uncertainty regarding the near-term market outlook.  It may or may not prove to be tumultuous, but a healthy level of diversification in portfolios will assist in weathering the storm.

*David Scobie is head of consulting (NZ) at Mercer Investments.
This article does not contain investment advice relating to your particular circumstances. No investment decision should be made based on this information without first obtaining appropriate professional advice and considering your circumstances.

Donald Trump and the GOP have done more for the cause of socialism in America than anyone since FDR.

I am keeping some cash ready to invest into the NYSE in case things go pear-shaped as a result of the elections. I missed the last dip and I am not planning to miss this one, if it eventuates.
I am also considering whether to go slightly overweight on precious metals within the next 48 hours.
PM traders. what do you reckon ?

Taxes are mentioned in this article that might be raised under a Biden presidency. Well, who is going to pay for all the corruption if trump continues. He has racked up over 4 trillion in debt for the country BEFORE the pandemic stimulus. His irresponsible corporate tax cuts will have to be reversed somewhat under any administration, you just cant continue to run the country into the ground with debt like trump does to his own businesses. He has said himself only losers pay taxes. His whole life has been run on borrowed money and he just files bankruptcy and walks when he screws up his business, you think that policy is good for America??? If trump gets in again , Americans will deserve the economic armageddon that will inevitably follow in his incompetent fat footsteps. The problem is, the rest of the world will be drawn into the quagmire. Interesting that people in NZ don't see this as an issue judging by only 2 comments.
And lighter regulation? yep, if you want America to return to the unregulated corporate cesspool and environmental pollution and destruction like the 50s,60s and 70s occurring again under trumpism. Unregulation is just jargon for environmental destruction because it has been proven that corporations do not have the ability to be responsible. Go ahead, make all policy based on your own monetary return and watch the clock run out. A vote for trump is a vote for dishonesty, ignorance, low morality, complete lack of integrity, total lack of understanding of macro-economic policy and the maturity of a 14 year old. Idiots have idiots leading them.