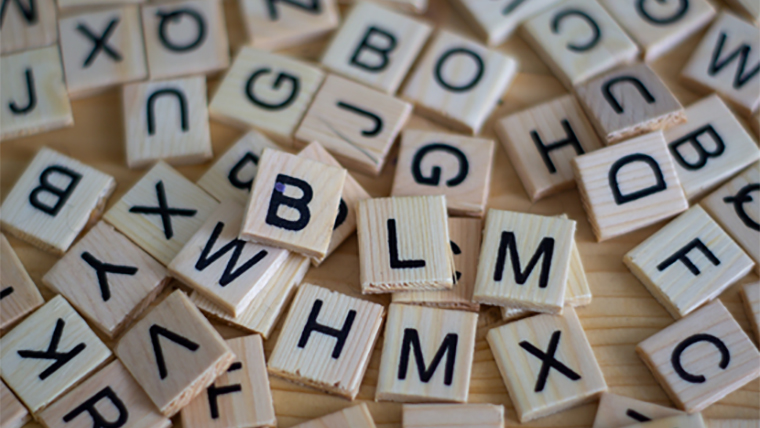 Just how quickly the world will recover from the pandemic-created recession is being widely debated. With the virus still raging out of control in much of the world and no clear pathway yet to widespread immunisation there is still a lot of uncertainty about whether the recovery will be sharp, a so-called V-shaped recovery, a slower U-shaped, or worse still, a drawn out L-shaped recovery.

New Zealand’s rebound is currently looking V-shaped though it is clear that any recovery will be felt unevenly across the economy.  In New Zealand more women than men lost their jobs and workers in industries like travel, hospitality and tourism have borne the brunt of the lockdowns and border closures.

Peter Atwater, an adjunct lecturer at William and Mary, a university in Virginia, coined the term “K-shaped recovery” to describe such uneven recoveries. What makes a K-shaped recovery different is that while some sectors of the economy may do very well immediately after the recession – resembling a V-shaped recovery – other sectors may limp along or even continue to get worse. The performance of the two sectors continues to diverge and the arms of the recovery for each sector resembles a letter K.

In the US, Biden has referred to their recovery as a K-shaped one with high-income professional workers retaining their jobs and seeing the value of their stockmarket and real estate assets grow, while the middle and lower income workers are experiencing declining incomes and for those who lost jobs are struggling to find new ones.

Uneven recoveries are not a new phenomenon and was particularly evident following the Global Financial Crisis. According to J.P. Morgan, the GFC recovery was different from other recoveries as previously major recessions had been followed by a sharp rebound in economic activity – a V-shaped recovery – whereas the GFC recovery was drawn out. But not for everyone. While corporate profitability returned to previous highs after 12 months, it took many years for the unemployment rate to return to pre-crisis levels and real wage growth also stagnated in the years that followed. 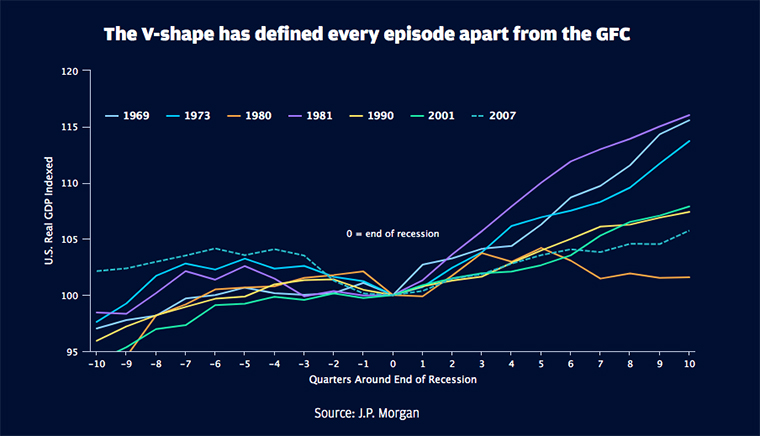 A K-shaped recovery is a likely scenario because of four factors that are peculiar to this recession:

It is looking likely that the pandemic has merely caused a pre-existing trend of business process automation to speed up. Lockdowns and social distancing has led to rapid adoption in new technologies replacing older methods, which will in turn lead to a divergence between the segments of society able to take advantage of those changes – such as remote work – and those that cannot.

The pandemic response has been notable for unprecedented central bank and government stimulus. This has tended to bolster asset prices, favouring asset holders and those with the resources to keep investing. Meanwhile, those in lower-paid jobs without substantial assets are seeing their wealth decline.

The effects are being felt globally with most countries experiencing a growth in house prices despite widespread lockdowns. This is clear in New Zealand where falling interest rates and a pre-existing shortage in housing supply has led to a boom in house prices. According to the latest REINZ monthly property report, the median house is up 14.7 percent on the previous year and the volume of sales is up 37.1 percent.  And The RBNZ has already signaled the potential for a historic move into negative OCR in 2021 which is predicted to push interest rates even lower, further increasing demand. 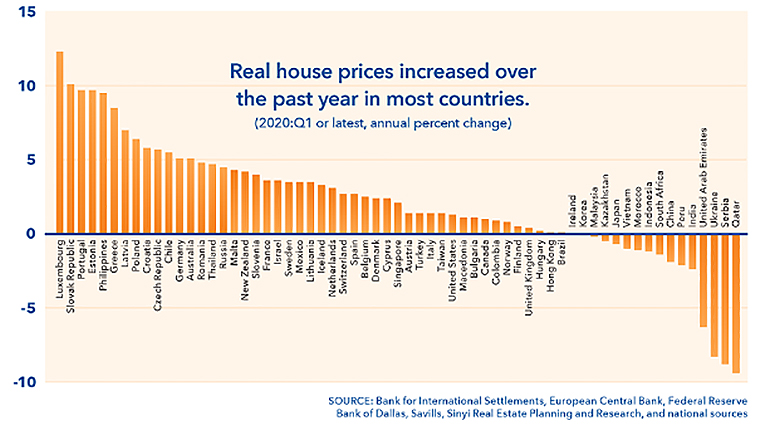 Meanwhile, stock markets around the world have also been surging to historic highs.

In a recent weekly update Treasury noted that while job numbers have trended down since May, weekly earnings are up. However rather than indicating a rise in hourly earnings it more likely reflects the fact that the jobs being lost have largely affected those on relatively low wages and hours. When these jobs are lost, median earnings will increase even if individual wage rates remain unchanged.

Because of the unusual nature of this recession certain industries are suffering more than others: travel, hospitality and tourism, and retail. At the other end of the scale some industries in the primary sector and health-related companies like Fisher and Paykel Healthcare and A2 Milk have out-performed their 2019 performance.

This is certainly the scenario playing out in the US, according to the US Chamber of Commerce where some industries, particularly tech companies supporting remote work have benefited from the pandemic, while the losers have been in travel, entertainment, leisure, hospitality, and food service industries. For these industries “there is no end in sight to the economic malaise”. 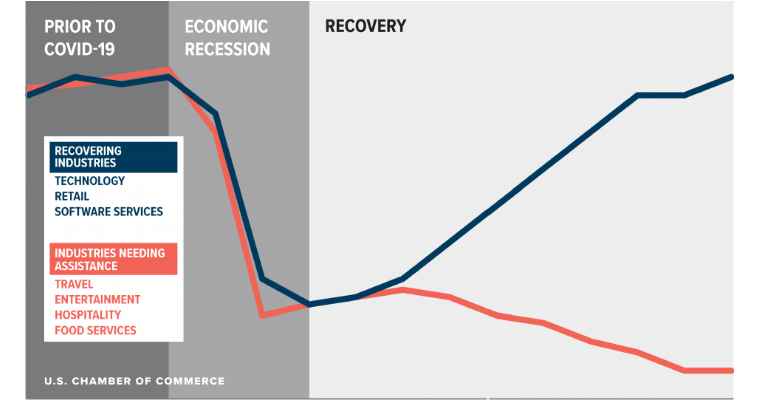 The lockdowns and social distancing measures which have been a feature of the COVID-recession initially led to a sharp drop in consumer spending. While in New Zealand there has been a significant bounce back following the nationwide lockdown, predicted increases in unemployment will lead to a slowdown in consumer spending for those most affected. The latest ANZ-Roy Morgan Consumer Confidence Index shows less than a quarter of households believe they will be better off in 2021.

It will become clearer over the coming months just how divergent the two legs of the “K” have become, and how long the pattern persists. However, it is already evident that those who emerge from the COVID-recession with their jobs intact, and with growing assets will be much better off than the rest. It will take bold, and possibly unpopular government policy to redress the imbalance that at the moment looks inevitable.

There is already a considerable imbalance, it's just continuing to worsen the longer it is not only allowed, but being actively encouraged by those in a position to do something about it.

It's as if we didn't [want to] learn anything from the GFC.

"It will take bold, and possibly unpopular government policy to redress the imbalance".

Yet, if lower international tourism and education is already baked in, why should the Gubmint keep pumping the chest of these corpses? It's, to mix an already strained metaphor, just gonna create Zombies up the wazoo....

But surely 'redressing the balance' could just as easily mean, for example, retraining workers from dead or dying industries into ones that have a future, rather than merely keeping the dying industries on life support?

Travel, hospitality, entertainment and food services are all discretionary spend.

How does a sector ask for government stimulus threatening to lay-off more staff in the same week as it calls for bringing more migrant workers?

However, Abbott said it was difficult to recruit qualified massage therapists for the thermal pools’ spa

Our brave new world will consist of 5% IT workers, 5% AI workers, and 5% scientists advancing technology.
The remaining 85% of us will be redundant and on the dole, and also made sterile to avoid the cost of producing more children for the 85% bracket.

Who is funding the technological advancements, scientists and IT workers or is AI smart enough to create and deploy funding? In the former case, division of labour suggest these IT experts also have financial expertise, which means they're just accountants with good IT skills.

If AI is creating money to fund itself, shouldn't AI also be intelligent enough to develop its own advancement?

Ha ha, nice one - The strength of a country is as good as their Healthcare systems - Once, you're exposed into this ins/outs/details of the Healthcare system marvels as well as a curse. You may then need to revise that percentage numbers.

Here's the logical of K, the top half keep on wanting to go up at what ever the cost, the bottom half just can't bare the load anymore - results? disconnection, separation of K figure, every one at the bottom, teachers, workers, laborer, police force, engineers, doctors, nurses, growers, bakers etc. - started to strike for the high cost of living - no one should stop this process, the bottom half need to move to other countries that willing to compromise their top half weight... Now, watch what happened with those top half of K without their bottom support.

Probably why we so reluctant to reform our immigration system. The wealthy don't want more high-skilled workers competing with them for their wages or market share and outbidding them on house sales.
They simply want modern slaves who will mass-produce services for the lowest wages possible. While we're at it, let's also claw back huge portions of those wages in high rents and price of essentials by keeping a lid on supply.