Opinion: The BNZ seeking to raise €500 mln in Europe right now seems mad. Or does it?

Opinion: The BNZ seeking to raise €500 mln in Europe right now seems mad. Or does it? 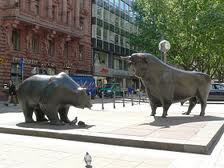 Targeted: The BNZ is targeting European institutional investors including those in Frankfurt.

At first glance news the BNZ is going cap in hand to European institutional investors this week seeking to borrow €500 million (about NZ$797 million) through a covered bond issue makes you think the bank must really need the money.

Either that or its management enjoyed a summer break somewhere where there was a lot more sun, and I mean a lot more, than the big wet pelting their Auckland headquarters.

That's because BNZ’s push for euro-denominated funding comes with the ink barely dry on Standard & Poor’s downgrades of nine euro-zone countries, including Italy and Spain and cutting France to AA+ from AAA. It also comes after ANZ, CBA and BNZ’s own parent, NAB, were forced to pay up for covered bond issues earlier this month.

So the message for BNZ Treasurer Tim Main, back from holiday yesterday, and his team is any covered bond issue in Europe right now is going to cost the bank a lot more than in the past. Especially when you add on the costs of converting the money from euros to the New Zealand dollar via the greenback, and that the New Zealand dollar is at record highs against the Euro at the moment.

So why do it unless you really need the money?

Maybe because, even at elevated prices, it’s one of - or even the only - long-term funding tap switched on to the bank right now. Or perhaps because you fear that from here on 2012 offshore wholesale fund raising conditions are only going to get worse as the euro-zone teeters on the brink.

The latter seems the most likely explanation as BNZ doesn’t appear to desperately need the money right now.

Its lending growth, although among the strongest of local banks in recent times with business lending up NZ$496 million in the September quarter and housing lending growing NZ$305 million according to the bank's latest General Disclosure Statement, is hardly surging ahead like a high speed train. And the bank has almost NZ$6.3 billion in liquid assets it can call on in emergencies.

Based on that GDS, the BNZ doesn’t have a huge amount of borrowings maturing this year. There’s short-term transferable notes with a face value of NZ$496 million due from July to September, medium-term notes with a fair value of just under NZ$1.4 billion maturing between May and December including almost NZ$1.2 billion covered by the Crown wholesale funding guarantee scheme, and an NZX listed subordinated bond issue with a face value of NZ$350 million that can be called by BNZ on June 15, but doesn’t mature until June 2017.

Main himself says BNZ plans to raise less than the NZ$4 billion plus it raised last year. He argues banks will need to jump when they see windows of fund raising opportunity this year against an ongoing backdrop of negative investor sentiment. From that perspective, paying up for your money is the better option than not raising any at all.

For the European institutional investors targeted as BNZ’s hat is passed around, New Zealand bank debt must look a hell of a lot more attractive than debt in their own continent’s banks right now. Good selling points to the investor’s clients include that BNZ is geographically about as far from the European sovereign debt debacle as possible and New Zealand is coupled to the Australian and Chinese economies rather than Europe’s.

Gareth, it might be a good idea to check Government deposits lodged with the RBNZ. These balances were/are  placed with the local banking commmunity and collateralised via currency swaps at around NZ 2.74% cost.
They (government deposits) are disappearing fast and have to be replaced - no wonder there was a pre-election Auckland housing boom financed by government overborrowing in front of the election at an average coupon cost of 5.50% p.a. offset by an outright loss return from the RBNZ @ OCR. My calculations assume this was costing you and me approximately a million plus a day up to end of October 2011.

"Bottom line, say the authors: expect recession in 2012, here and in most of the world".
http://www.marketoracle.co.uk/Article32661.html
"The interconnectedness of global activity will serve to further destabilize the global financial system in 2012. Although the federal government debt to GDP ratio is surging past 100%, if private indebtedness is included our debt to GDP ratio exceeds 350%. The same calculation reveals a debt ratio of 490% in Japan, 443% in Euro currency countries, and 459% in the United Kingdom. Similar to the U.S., their growth rates are also falling rapidly. In fact, there is compelling evidence that Europe and Japan have already entered recessions. In addition, manufacturing recessions have emerged in China and India, and growth in the Brazilian economy came to a standstill in the third quarter."
What's this mean for NZ?
The new normal is now the best you can hope for!
Govt will use the RBNZ to prop up the property bubbles on cheap credit and lies about recovery.
Govt might finally after wasting three years, get round to reducing its own wasteful idiotic spending on stupid make work pipedreams and useless depts that shuffle paper.
Will we see the start of an end to the bloated salaries and fatter bonuses...don't count on it.
No more exodus to aus for work because it won't be there...which leads to a rise in unemployment...even deeper fiscal hole...chances of a downgrade rising...higher cost of credit anyway as explained above...rise in fixed term rates...
The decline in new build activity set to sink under the weight and the gst burden does not help one little bit. .....Try telling English that!...political stupidity is far more important than rational thought.

The BNZ is chasing some cheap euro that the ECB has been dishing out to the banks in Europe in the hope the banks will buy the piigs shite bonds...but the banks are not locked into buying that garbage...they are free to buy BNZ covered bonds...
The real question should be what action will Bollard take if the cheaper ECB filthy euro flood heads into the NZ housing market?
Nobody is asking that question.

Apparently the deal has failed to fly - http://www.reuters.com/article/2012/01/17/bnz-covered-bond-idUSL3E8CH3IL...
But Moody's has issued an Aaa credit rating on a NZ$225 mln 6-yr BNZ covered bond issue. Not yet sure who that's to.