Another day in Parliament, another couple of politicians using selective numbers to support their arguments on tax figures

Another day in Parliament, another couple of politicians using selective numbers to support their arguments on tax figures

They say two things in life are certain: Death and taxes.

I'd add a third, use by politicians (and journalists - ha) of selective numbers to support their arguments.

The numbers that have been debated the most in Parliament over the last few years must be the effects of the government's tax changes.

They're either negative, neutral, broadly neutral (a fudge for initially negative, then turning positive), or just straight positive.

And our politicians have been able to use the numbers in different ways to support all of the above.

Wednesday in Parliament it was no different.

Prime Minister John Key was being quizzed by Green Party co-leader Russel Norman about the claimed neutrality of the government's tax changes.

The changes Norman was trying to get at were those included in the 2010 tax switch, which saw the government cut income and company taxes, raise GST, eliminate the ability to claim depreciation on buildings with a usable life over 50 years, and a couple of extra fiddles around the edges.

At the time the package was announced, we were told by Finance Minister bill English the changes would be "broadly neutral" which, as indicated above, is a fudge for "initially negative, then hopefully turning positive."

A helpful table from Budget 2010 shows the changes and the effects of the package: 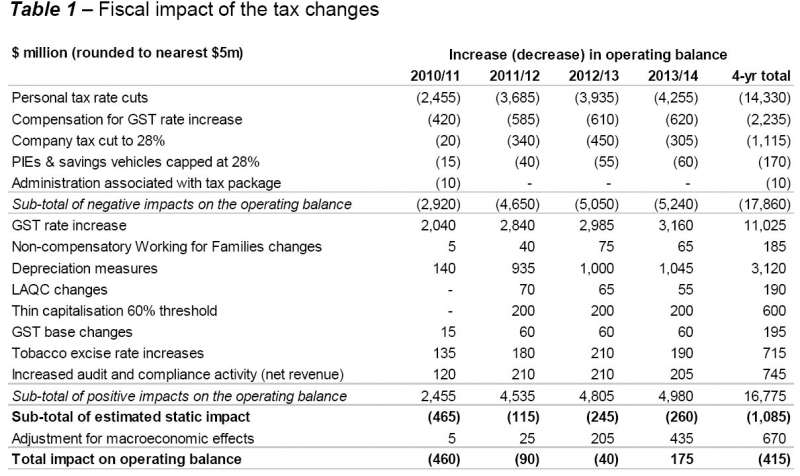 As you can see, the total impact on the government's operating balance was expected by Treasury to be an increase of NZ$415 million over four years. Deficits in the first three years of the package would be replaced by more revenue in the fourth year, and from that point we'd be away laughing.

However, Treasury got there by including some pretty helpful "macroeconomic effects," without which would have seen the package cost NZ$1.085 billion, with the static impact on the rise.

In Parliament on Wednesday, when asked about the costs of the government's tax package, Key noted the NZ$415 million figure for the first four years of the package.

“But from the fourth year and forever after, the package is strongly positive,” Key told the House.

Key then changed tack and began talking not just about the 2010 tax switch, but all of the tax changes the government had made since coming into office.

When it came to comments on the neutrality of the "tax package," you see, it would be better to talk about all the government’s moves, not just one part of it, the House was told.

The Finance Minister's office provided another helpful table to let everyone know what Key was talking about: 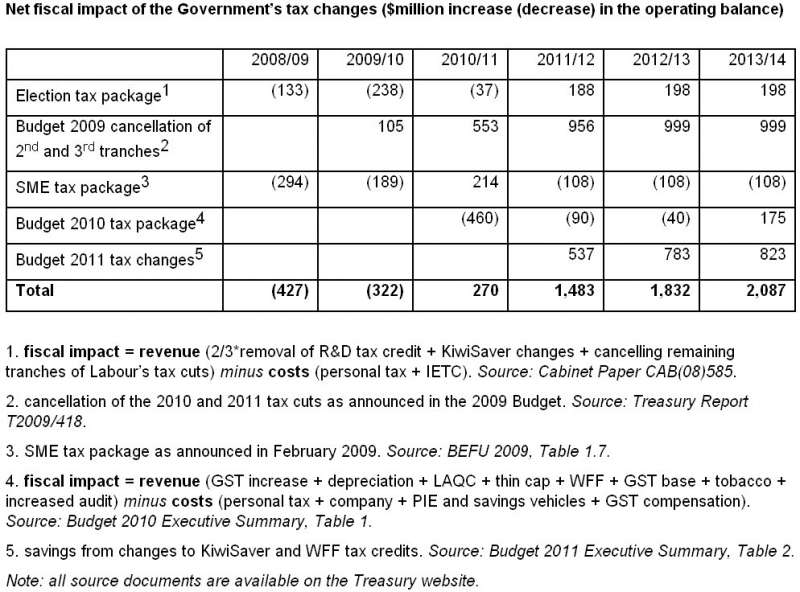 “A remarkable achievement,” he said.

Not put off by the figures, Norman took a different tack, asking the Prime Minister about table 4 in the government's 2010/11 financial statements "which showed that his government’s 2010 tax cut package has in practice cost about NZ$1 billion in just the first nine months."

Key, however, wanted to stick with his table, reminding the house again about the positive parts of the government's changes

“So our changes are reducing [the] deficit, and reducing the amount the government needs to borrow. No wonder the IMF was praising this government’s economic leadership in the paper this week,” Key said.

But Norman too knew how to stick to his figures when presented with different ones from the opposing side, bringing the Prime Minister back to his table showing the NZ$1 billion hole created in just nine months. 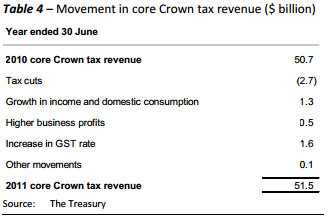 Struggling to find a NZ$1 billion hole due to the 2010 tax switch from that table?

NZ$2.7 billion lost from the tax cuts, minus NZ$1.6 billion from the hike in GST, gives about a NZ$1 billion hole.

As simple as saying those tax changes were fiscally neutral. Or positive.

Perhaps it's best to stick with the initial fudge of broadly neutral. That covers all bases.

What you are discribing has a name: corruption
Plain and simple these people are liars, traitors, dis-honorable and deceitful  and the "asleep at the wheel" majority of NZ continue to vote thinking they still have some form of representation via some form of 'alleged' democracy.
Sad all round. What will it take? Total economic oblivion? Yes......I believe so

Someone should ask the PM what he intends to do with his extra take home pay as a result of the tax switch to ensure that his extra cash "trickles down" and subsequently gets somehow back into the government coffers.

Stop megalomaniac economic ambitions from the NZgovernment.
Alex – mobilise your generation to get rid of a corrupted and arrogant government, before it is too late and you will pay an enormous price in the future.
Our economy is now on a very dangers course.

Most folk only die once (that we have cognitive consciousness of).
Tax comes round every year. Lots of types of taxes too.

Miss Astrid..your a genius..!!! I'm pleading complete loss of cognitive consciousness  on my next return....Christov ..? Christov who..?

It is John Key who is spinning the numbers and not answering the question; all so he doesn't have to acknowledge the lie that the 2010 tax cuts were (broadly) fiscally neutral.

He must have to replace his burnt trousers lots of times each week -- does the taxpayer pay for them I wonder.

God help us if we ever see the day when the Greens have to put together a budget!

Andrewo - in the current economic climate some policies of “The Greens” make far more sense long term then any other of any other NZparties. So Andrew, explain why should they not be able to put a sensible budget together ?
E.g. do you believe as your Steven Joyce reckons building more roads and casinos are  productive ?

Gummy – I think you suffer under a clear sign of “Asparagus Syndrome” – since the time of Nandor Tanczos and Sue Bradford - the NZGreens have changed.

Yesterday was International Pillow Fight Day : I hope that you remembered to clobber the missus with the one which you don't store your gold bars in !

Gummy – you don’t know, but in our marriage of more then 35 years - I’m the “Battered Fish”.
Like most Swisses - luckily she doesn’t know, under which mountain their husbands buried the gold bars.