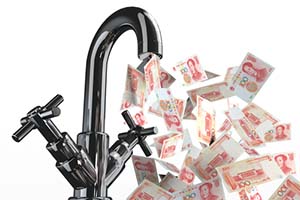 Last week I gave a presentation about the ‘big picture’ to a gathering of government officials in Wellington.

I talked about China’s economy and financial market volatility, rather on-the-money topics given this week’s global stock-market meltdown!

Here is a potted-version of that presentation.

When anybody says ‘global economy’ they’re really talking about three economies: the US, China and Europe. 4 at a push if we include Japan.

On one level, the story of the global economy is a very simple one: output in the world’s second largest economy China is beginning to grow more slowly and that is impacting on everyone who trades with them. It is leading to falling commodity prices, reduced export forecasts, lower interest rates and generally quite a bit of business doom and gloom.

It wouldn’t be so bad but other large economies are stuck in the doldrums too – While Europe and the US are both expected to grow more quickly than they have in recent years, that’s not saying much.

Business confidence is ‘Flagging’ said the ANZ in its business outlook report in July. No surprise there.

What’s unusual about this situation is that in the past large developing countries – and China is the largest – grew quickly and steadily. They provided a buffer during the business cycles of the developed world. If demand in the US became a bit weak, US products could be sold into the ever-expanding Chinese market and US businesses could stay afloat.

The news out of China suggests that buffer is not as robust as it once was. It can’t keep acting as a sponge for the rest of the world’s economic over-spill.

The World Bank tells us that after growing steadily at more than 10% a year for three decades, China’s output growth is slowing to 7% and is expected to dip under 7% by 2017.

When you’ve no longer got a country like China acting as a buffer for the world’s economic ups and downs, exchange rates and interest rates have more work to do. They send signals to businesses, investors and consumers that lead to adjustments in behavior that eventually moderates business cycles within each country.

So because the world no longer has the China buffer available to it, the peaks and troughs in exchange rates and interest rates may be greater than in the past. Ups and downs could be more magnified than we’ve experienced in quite a while.

New Zealand doesn’t seem particularly well-equipped to understand, prepare for and benefit from developments in China. Economists could do a much better job than they seem to be doing.

Economists are not typically trained in central planning – they’ve come from an environment where economic decisions are typically made in markets fuelled by private self-interest. Their tools are uniquely inappropriate when self-interest isn’t the driving factor in decision-making.

Inevitably economists seem to moan about the Chinese government not understanding markets, but that’s really unhelpful.

Last week economist Paul Krugman, who is a Nobel-Prize winner and regular columnist at the New York Times, had this to say:

The common theme in these wild policy swings is that China’s leadership keeps imagining that it can order markets around, telling them what prices to reach. And that’s not how things work.

I think he’d do well to focus on the reality of what is in China, and try and understand that, rather than bemoan the fact China doesn’t fit his definition of what an economy should be.

Despite decades of experiment and reform, the Chinese government retains effective control over a considerable part of the economy. There are still 155,000 SOEs for example. State control is especially evident in the financial sector. There are four large state-owned banks that dominate, and they’re subject to close control. For example, almost 95 per cent of all the loans made in China are controlled by the central government. So the government largely orders the financial sector around – that’s how things work in China.

Economists like Krugman need a framework for understanding the process of transition from ‘communism’ – impatiently applying to transitioning economies analytical tools that are only appropriate for market-based economies isn’t doing anyone any favours.

There is no great data about China

And even if we do be more open minded and get a better framework for understanding China, there is the ongoing problem of getting reliable data. Heaven knows, it’s hard enough getting accurate data on a tiny country like NZ, imagine the practical problems in doing it for China. It’s always been an issue for China.

And of there are the ongoing (naive in my view) whispers about official data and unofficial data – of course there are different data sets – there always has been. Without the discipline of a voting public demanding honest statistics, where would the pressure come from?

And let’s be honest, even in our democracy, even when data is robustly collected the messages from it can be twisted beyond recognition in the hands of skillful spin doctors.

So, in summary, we lack a good understanding of China. And that leads on to a second problem. We don’t understand how China affects us.

We don't understand how China affects us

We seem obsessed with looking at foreign trade: imports, exports, dairy prices. But capital flows are hugely important too, but overlooked.

The economic policy tools available to the Chinese authorities are evolving but they are still not as flexible as those we’ve become used to here. Controlling credit growth has always been a problem in China and still is.

Because the banking sector remains largely undeveloped, the government has rather imprecise monetary policy tools available to it. During 2012-early 2014 credit growth was excessive in China and it led to a domestic housing bubble.

To complicate matters, during 2013, there was an easing of controls over investment abroad by Chinese companies – which made it easier for Chinese companies to invest overseas if they wanted to. Until then, non-sanctioned investment occurred but through informal channels.

And for the first time in 20 years China officially devalued the RMB last week (it has an informal peg against the USD).

So initially the credit boom, and then looser foreign exchange controls, led to unprecedented capital flows from China to other markets – the US, the UK, Canada, Australia ….. and I would argue NZ (although we have no comprehensive data….). In July the World Bank reported that capital outflows from China are still increasing sharply. Now of course, further fuel is being added by fears of further weakness in the RMB.

There is a common pattern to the capital flows from China – the capital isn’t just flowing into stock markets and bank deposits in other countries (these are usually popular because they’re well regulated and it’s easy to cash up again) but into property.

I want to make the point that what I am talking about here is capital flowing out of China, not people – the issue of capital flowing from China is a separate issue to migration.

What we have is a situation of China’s financial assets becoming globally mobile. It could occur with or without an accompanying lift in migration from China. It happens to be the case that we’re receiving higher levels of migration too.

NZ has been caught napping

As a country, we’ve been caught napping.

– We were not expecting capital to flow here from China (why not?);

– If we’d been asked we probably would have expected it to enter our stock market or our companies not our property market (although there were warning signs from other countries);

– We didn’t even have a system for monitoring direct capital flows into our housing market.

– We’re not even talking about the issue sensibly. We’re allowing our media to drive the debate and they are making the mistake of muddling capital inflows from China with people inflows (migration)

– as a result anyone who questions the benefits of having sizeable foreign capital inflows into New Zealand property gets accused of being anti-migrant and inciting racism.

We need to start thinking quickly about the effects on New Zealand of China’s economy.

We need to move beyond a focus on dairy prices and exports.

What about unprecedented capital flows from China? Are the flows permanent or just hot money? Are we making the best use of the money? What are the social consequences of escalating house prices and how can we mitigate those?

Susan Guthrie is an economist at the Morgan Foundation. This opinion piece was first published on the blog garethsworld.com and is here with permission.

Economists like anyone else who spends too long in University have their minds shaped for them.....nothing beats practical experience.....but you don't hear of too many economists undertaking a small start-up business and then expanding and it is this lack of real market experience at grassroots level that is the biggest issue.....theories are fine but it needs to be remembered that there is a difference between theory and practice and that is why economists so often get it wrong.....same problem happens in Government and in the bureaucracies!!

It is when you have some napping, some being ignorant and incompetent, others not even knowing what fundamentals they should be monitoring and some who just got outright star-struck by China that everything starts turning to custard.........given that China has strict rules on capital outflows perhaps Governments and bureaucrats around the world thought that China would have the ability to ensure that the rules would be followed........now they find out that China can't keep tabs on capital outflows and that their own systems were non-existent.....

All those Politicians and bureaucrats around the world who have done everything to stop the highs and lows from happening in the markets......must realise that you can only stifle for so long...eventually the market will win out....that is why they say the market is always right!! Could get very interesting for housing in the next few years.....it appears no-one wanted volatility in house prices but then everything has been done to ensure that it can happen......the far reaching consequences of globalising house sales might catch many people off guard.

It is all about the skills.....and Helen fibbed to the nation!!

Easy to articulate the risks - but, what would you do about them - from a New Zealand point-of-view?

And therein lies the problem

Unprecedented capital flows from China to other markets - US, UK, Canada, Australia ….. and I would argue NZ (although we have no comprehensive data)

Reserve Bank of NZ should know - have they simply ignored where it went?

How did this article slip through the NZ National backroom spindoctor 'control of all media' firewall' ?

The current Govt welcomes all money from all-comers for all/any NZ assets: houses, farms, companies., etc. If it can be sold for money, that is a 'good thing'. It somehow benefits us NZers. They are unconcerned, unbothered, relaxed about it all.

GDP of Qatar is? (and per capita)

Nope, we haven't been caught napping, kiwi's/citizens are just too dumb, or too invested in selfish personal gain.

How many millions worth of property do the politicians own?

I think somehow this image should be incorporated into the NZ flag:
http://www.fedupusa.org/wp-content/uploads/2013/08/Debt-Slave.jpg