Cam Preston's take on what's really happening in Christchurch 5 years after the big earthquake
22nd Feb 16, 5:00am by Guest 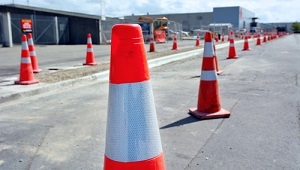 Six months ago I illustrated the delaying tactics being employed to force Canterbury homeowners to accept lowball cash settlements by their insurers.

Insurers officially ran out of reinsurance (insurers’ insurance) for the 2011 Christchurch earthquake this year, meaning, five years after the devastation, the cash to settle claims is now coming from their shareholders, not overseas reinsurers.

I also lamented the fact that there is absolutely nothing that local policyholders seem to be able to do to prevent this given the regulations covering the settlement of insurance claims in New Zealand number zero.

So on the fifth anniversary, I thought I would look at progress once again, but this time a little closer.

I started by reading the obligatory media statement from the Insurance Council of New Zealand stating “Private insurers are on track to settle the vast majority of Canterbury earthquake claims by the end of this year”.

Lacking in both truth and substance I then went straight to the two members of the Council that between them hold more than two thirds of all major earthquake claims: IAG (State, NZI, Lantern, BNZ, ASB Brands) and Southern Response (formerly AMI Insurance): 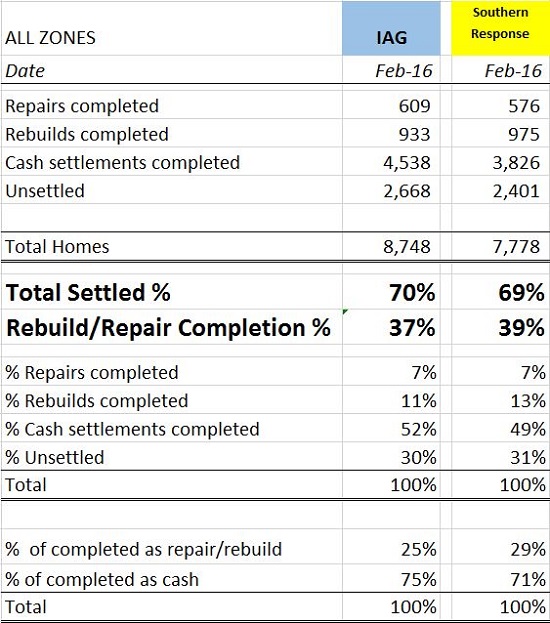 While these two insurers still have 5,069 families awaiting resolution of their home claim, they appear to have made some progress from the 60% and 62% settlement progress reported in September last year.

But do those statistics really convey the true story?

You can see that both have taken advantage of “cash settlements”, the acting of writing a cheque to settle a claim.

In particular 4,152 of their claims were for early “Red Zoned” properties, the majority of which were cash settled: 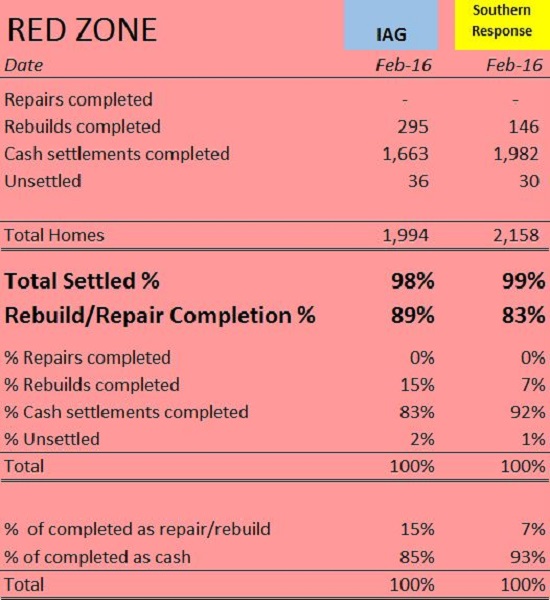 However when the Red Zoners are removed from the statistics for both these companies, a much clearer picture of the progress of non-Red Zone (or “Green Zone”) property owners becomes apparent: 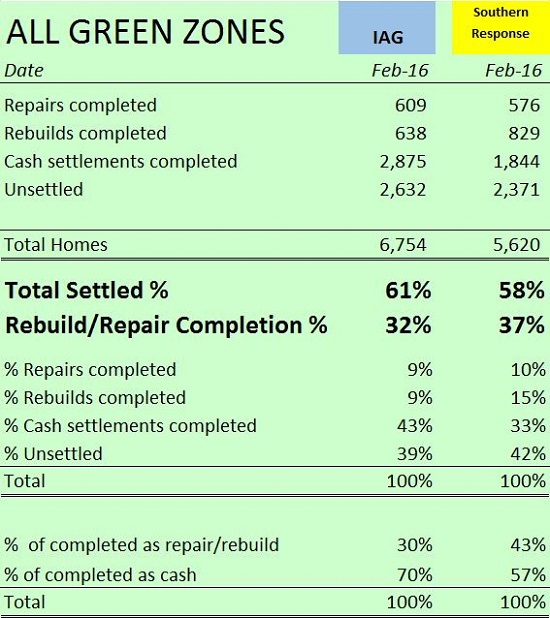 So while nearly 100% of Red Zones claims were settled early on, Green Zone settlements stubbornly sit at around 60%.

However what is even more telling is that 70% and 57% of Green Zone settlements respectively have been completed by cash settlement also, the simple act of the insurer writing and signing a check after 5 years.

If you examine the settlements where the claimants have (quite rightly under their policies) asked the insurer to reinstate (repair or rebuild) the property, the completion rates sit at a shocking 32% and 37%.

So it has taken over five years for insurers to complete just over a third of the reinstatements that claimants are entitled to, and have requested, under their policies.

Of course there is an avalanche of the usual excuses: consenting delays, contractor shortages, EQC inaction, you name it and it gets thrown up as an excuse for insurers to delay.

But here’s the real reason, and it has nothing to do with any of those issues.

A quick look at Southern Response’s claim liability (which I first examined in 2013) shows that the increasing cost of claims (or ‘loss creep’) has set in once again as cash settlement opportunities dry up: 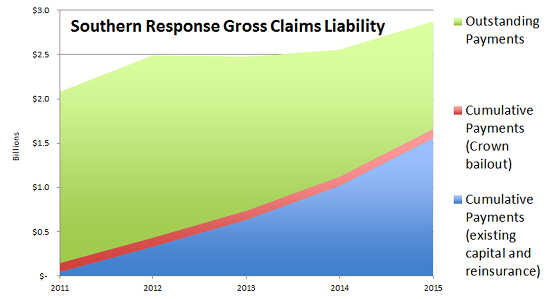 So while Southern Response managed to stave off loss creep for a couple of years it is back now that they are forced to actually do what their policies promised: reinstate homes.

IAG has undertaken a large restructuring and consolidation exercise this year so it will be somewhat difficult to untangle the true financial hit from their survival tactic of ‘delay and recapitalise’ – although reputational damage is quite evident locally.

So while both are only a third of the way through their reinstatement programmes, it is clear that despite the spin from their Insurance Council lobby group, they are not only far from “on track to settle the vast majority of Canterbury earthquake claims by the end of this year”, they are also far from escaping the wrath of their respective shareholders.

Story has been updated with latest figures.

Thanks Cam. A very good piece of investigative journalism. Numbers always cut through the spin.
Given that they are struggling to come up with the cash and with about 70% of the domestic market, would anybody care to guess how IAG customers would fare if there was a major event in one of the other major centres like Auckland?

Delay, deny, defend
What are the McKinsey documents?

In the mid 1990’s, Allstate reportedly hired the McKinsey Company, a New York consulting firm, to show it how to increase profits. McKinsey allegedly told Allstate to avoid paying claims, and when they do pay – pay less. Due to McKinsey’s help, the insurer allegedly saved over $700 million and increased their stock price.

The most damaging part of the documents are two analogies where McKinsey said that, 1) policyholders who accepted lower settlement offers were “in good hands” (Allstate’s slogan), but those that fought the settlement offer should get Allstate’s “boxing gloves”, and 2) Allstate should take an “alligator approach” to claim payments and settlement offers – meaning that the company should just “sit and wait” in the hope of frustrating policyholders to accept less or simply go away.

If the September industry numbers include red zone claims but they have been excluded from calculations for this comparative analysis, the statement that the settlement progress rate is 'sitting stubbornly at 60%' appears to be incorrect ?

In the absence of confirmation that the Red Zone data was excluded or included in both comparator data
sets, the credibility of Cam Preston's conclusions about the rate of insurer progress must now be in question.
As he will also be aware, the IAG/Southern Response Feb data includes a bulge of claims that had only recently gone over cap and thus will be still in the first stages of evaluation. That factor was largely outside the insurers control and negatively skews the overall resolution rates they would otherwise be achieving.

Mr Grafton, the data is sound. Red Zone settlements were included (and excluded) in the same way for both insurers as indicated in the tables.

The data was provided to me last week by IAG's General Manager of Communications Renee Walker, and Southern Response's data is publicly available online.

The commonly held excuse of EQC holding up private insurer progress is questionable at best.

It should be noted that in 2013 the Insurance Council of New Zealand reported their insurer members had approx 25,000 'over EQC cap' claims:

Then suddenly for unexplained reasons in early 2014 this dropped to 22,000:

There has been some suspicion of collusion between EQC and the Private Insurers in order for Private Insurers to 'buy' time to recapitalise, however the explanation for the dive in claims from 25,000 to 22,000 and then back again slowly to 25,000 today is as yet unexplained.

Ha, nice try but not Grafton I'm afraid, not even close. Nice conspiracy theory too about EQC and Insurers colluding to either delay claims pass through at operational level or create fabricated management data from which executives deliberately provide false guidance to government and the market. Like that wouldn't leak out or market and reinsurer analysts wouldn't pick up on it, particularly once the pre dated 'held back' claims materialised!
The regrettably common over/under cap seesaw story is the less titillating but primary explanation for data fluidity over 2013/2014.

Sigh. Southern Response (SR) is NOT an insurer. It is a 100% taxpayer-funded Crown company tasked with settling the long tail of liabilities stemming from the 'bad bank' side of AMI (the 'good bank' side is now a part of IAG).

SR has no active policyholders, no premium income, and no other source of readies except from the person staring at You from the mirror.

Southern Response Earthquake Services Limited is the new name for AMI Insurance Limited, a company which was incorporated on 2 October 1978:

It changed its name on 5 April 2012, but legally it is still the old AMI Insurance, just with a fancy new name.

Of the $1.5bln paid to their 'active policyholders' to date, only $100mln (or 7%) has come from taxpayers, the vast majority of cash has come for the old AMI Insurance's insufficient reinsurance and reserves.

The old Directors of AMI Insurance were bailed out by the taxpayer, and not one of them has been questioned after so many years, they all now live overseas.

If I was a taxpayer (which I am) I would be asking some serious questions of the old Board of AMI insurance, as unfortunately while only $100mln of taxpayers cash has been spent to date, the forecast is that a lot more will be required, and yes it is coming from the guy in the mirror.

Cantabrian policyholders are grateful for taxpayer assistance, but the bailout was for AMI Insurance Board, the Government of the day, and the financial system of the time, not just for policyholders.

Crusading might be OK if he understood the EQ insurance claims process. EG his latest article describes cash settlements as being largely a 'simple act' of writing out a cheque (well off the mark - they are usually just as complex to get to the agreement stage as rebuilds) and his authoritative sounding statement that reinsurance has been 'officially' exhausted (again factually incorrect - some reinsurance programs are still alive in respect of the CHCH EQ sequence)