Dave Grimmond calls for an investigation of fuel pricing by the Commerce Commission. He thinks suppliers could be hobbling GDP by 0.25% per year

Dave Grimmond calls for an investigation of fuel pricing by the Commerce Commission. He thinks suppliers could be hobbling GDP by 0.25% per year 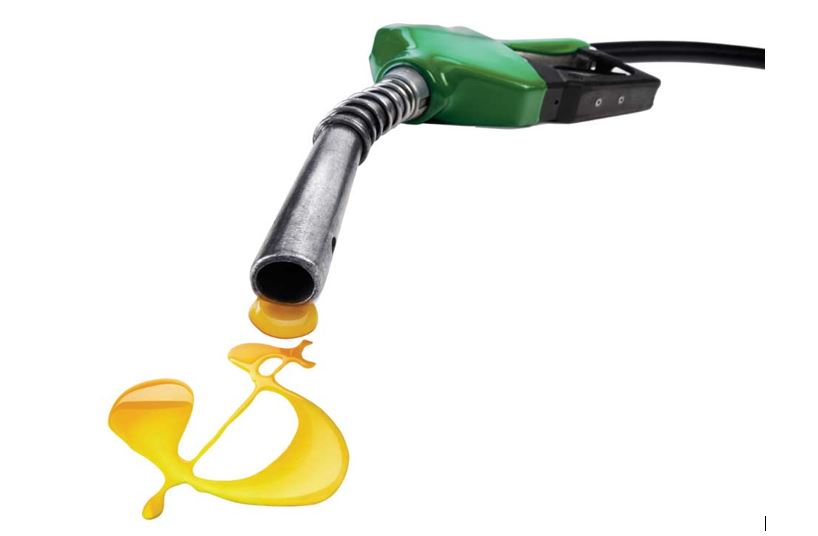 In New Zealand dollar terms this represents a decline from about $130 a barrel in mid-2014 to something around $50-$60 currently.

The figure fluctuates a bit depending on the source of oil, but the general trend is that oil prices are less than half what they were in 2014, even when allowing for the concurrent depreciation in the New Zealand dollar.

The decline in prices at the local pump have been far more muted, with diesel prices declining by 25%, and petrol prices declining by 11-13% in the 18 months to December 2015. Some of this reflects that the import price of oil only represents one component of the price of petrol at the pump. There are also refining, delivery, station operation, and overhead costs.  But even so the decline in pump prices seems overly low in comparison to the decline in import prices for oil.

The implication is that there has been a considerable widening in margins being taken by oil companies.

The oil companies might argue that margins have been tight but as a casual perusal of Graph 1 below would suggest these margins have probably been widening since 2011.

Indeed the MBIE Energy Price Data Tables indicate that importer margins on retail petrol have expanded from around 15c per litre at the end of 2010 to close to 30c per litre in 2015. Retail margins for automotive fuels appear to be currently at record high levels (see Graph 2).  At a time when farmers are struggling with low international commodity prices I am sure that they will be thrilled to know that they are accommodating the local oil industry to extract record returns from diesel sales. 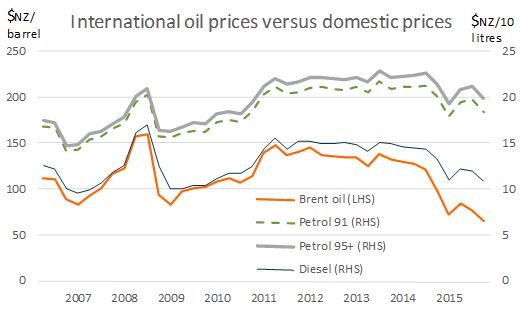 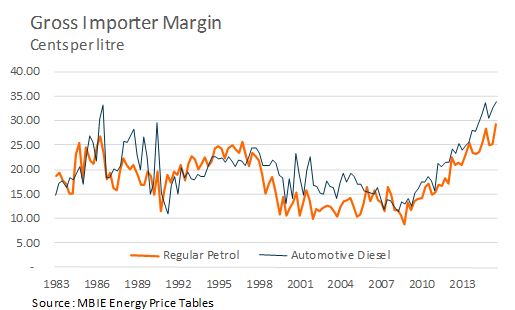 A lack of competitive pressures appears to be a factor behind the recent expansion in margins.

A short trip from Wellington to the Wairarapa shows that there is a 9-10 cent differential in per litre retail petrol prices.  Are the cost advantages that Wairarapa has worth 10 cents a litre?  Or perhaps the presence of Gull, an independent petrol retailer, active in the Wairarapa but absent from Wellington, is having an influence?

The fact that prices are so much higher in Wellington begs the question: are the main petrol companies currently extracting obscene profits in Wellington?

Or perhaps the issue might be that they are practicing predatory pricing practices in the Wairarapa?  Or maybe it’s a bit of both?

Something seems to be adrift in the domestic oil market and sufficiently so as to warrant some form of investigation by the Commerce Commission.

In a simple back of the envelope exercise, I estimate that retail petrol prices have been consistently 5-10 cents per litre above what the decline in world oil prices would suggest are warranted.  For diesel prices the range seems to be between 8 and 13 cents.  These numbers reflect the extent that a model relating domestic retail prices to international oil prices (expressed in New Zealand prices) under-forecasts actual retail prices in New Zealand since September 2014.

Given that New Zealanders consume around 3 billion litres of petrol and 3 billion more litres of diesel each year, such a margin excess is economically meaningful.

An excess margin of around 10 cents per litre would represent a transfer from consumers to oil companies in the region of $600 mln each year.  This is equivalent to around one quarter of one percent of GDP.

In other words, I am asking have the oil companies just expropriated about one-eighth of the estimated 2% economic growth over the last year or can they explain why the climb in their margins is justified?

David Grimmond is an Associate Economist at Infometrics. You can contact him here »

I bought diesel for 59c a litre near Tokoroa last week at a Gull prepay. Paying $1.08 today at a Gull near Warkworth, which must have the Auckland regions most expensive fuel. Funny that, as its nearer to Marsden Point...

Try Auckland airport just down the road from the wiri fuel storage centre its the most expensive in Auckland, drive 5 kms away and can save 10-15 cents a litre

If I had a Farmlands card, (which I would need to own at least a lifestyle block to be able to apply for) then I could get fuel 10 cents a litre cheaper at one particular local fuel retailer.

There is a proliferation of this sort of 'loyalty' scheme in NZ. They should be abolished. They are a tactic to split a homogenous good (petrol, diesel) with one price to a heterogenous good (farmer petrol, AA petrol, supermarket chain x petrol....) with multiple prices (price discrimination) which means retailers can avoid competitive switching behaviour by consumers and thus they are able to hike prices up above the true competitive market price.

Farmers are not really saving 10 cents although they probably are purchasing fuel cheaper than some consumers in NZ who are really getting screwed.

What we seemed to have lost in NZ is the rationale for having systems in place so that market competition leads to one competitive price for all.

That is the logic of rules around weights and measures -because it gave transparency and consistency around price discovery. But in many markets in NZ - there seems to be a deliberate ploy by retailers to create a baffling array of pricing schedules, 'specials', product categories and consumer categories so that for the consumer there is no transparency or consistency and it is impossible to find the best price.

Are we any better off than a medieval yokel being sold a pig in a poke? https://en.wikipedia.org/wiki/Pig_in_a_poke

As I said before -loyalty cards for petrol stations should not be allowed and the price of fuel advertised at the pump should apply to all comers. Then competition would drop the fuel price to its correct competitive price.