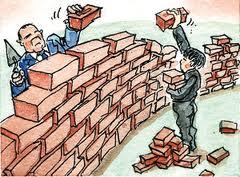 Words like globalisation and liberalisation are fast becoming buzzwords of the past. Anti-globalisation, non-tariff barriers and protectionism are the new ones to watch out for.

For years, countries have been signing free trade agreements faster than they can measure their uptakes and outcomes.

In spite of this, examples of counter-trade activities are popping up in many areas. For example, in the wake of the Brexit, the UK has had to fend off accusations that it has adopted an ‘anti-globalisation’ stance.

In an effort to counteract the opening of certain trade areas through free trade agreements, many countries are establishing more non-tariff barriers. This practice has become so commonplace that it is even referred to by its acronym, NTB.

China on the defensive

The worldwide dumping of Chinese steel has caused a lot of controversy. The issue is far from being resolved, as China’s accession to the World Trade Organisation (WTO) is dependent on meeting conditions around anti-dumping tariffs.

The EU and the US are imposing more tariffs on cheap exports from China, making it clear that these markets are not keen to accept China as a market economy. The G-20 nations, which account for 85 per cent of global trade, have admitted that protectionism has been on the rise since the global financial crisis of 2008, and that new trade restrictions in the group have reached their highest monthly average since the WTO began monitoring these in 2009. This is true for both goods and services trade.

China encountered 65 trade-remedy investigations launched by 17 countries and regions in the first half of 2016. This was a 67 per cent surge year-on-year.

The US Department of Commerce recently decided that it would begin charging duties on Samsung and LG branded washing machines manufactured in China, after upholding a complaint by competitor Whirlpool last year. The complaint alleged that the companies sold their washing machines in the US for less than it cost to produce them.

China on the offensive

Despite the ongoing disputes with anti-dumping and trade-remedy restrictions, China is not always on the receiving end.

Or to put it simply, China will go on the offensive when the opportunity arises. For example, about three weeks ago, the EU and the US separately launched a new legal challenge at the WTO over the duties and quotas that China imposes on its exports of some raw materials.

They claimed that this behaviour is in violation of WTO rules as these raw materials, e.g. graphite, cobalt, chromium and magnesia, will now serve Chinese industries at the expense of European and American companies and consumers. A formal consultation will take place with the aim of finding a settlement in 60 days. If a settlement is not reached, a WTO panel may be formed to investigate at the request of the complaining party.

China responded by saying that it needs to conserve resources and protect its ecological environment. In fact, China itself is reliant on imports for some of these raw materials.

At the same time, China has started imposing anti-dumping tariffs on electrical steel imports from the EU, Japan and South Korea. Electrical steel is used for power transformers and electric motors.

In a pending case, the Metallurgical Mines Association of China (MMAC) is petitioning the Chinese Ministry of Commerce to look into the anti-dumping behaviours of Australian and Brazilian iron ore miners.

It is clear that China is increasingly engaging in tit-for-tat strategy around trade and protectionism.

We can’t blame them for doing so. With a market full of bargaining power, the world’s second largest economy is making use of protectionism for resource conservation and ecological environment protection. “Heads you win, tails I lose” will not persist.

Government is too dependent on China so will have to dance to their tune and are and will be happy to dance in the name of economy. As now everything in NZ has Asian footprint and the government does not realize that a small island like ours can be bought number of time with their wealth (Any premium sight, property, farm or business sold will have their name)

Earlier times, this is how colonization use to start and in today's time it will be but the name will will change.

Love many, trust few, and always paddle your own canoe.
We have aligned ourselves far too closely to China and are far too vulnerable to whatever happens there.
A wide spread of customers and relationships would give us far more security.
China in particular is a very risky partner because it does not have the economic checks and balances that a free market should have. It has a totalitarian political system which means that their economic system is more vulnerable to the whims of whoever is in power. Similarly political and economic relationships with them are bound to be more volatile. Totalitarian leaders tend to want everything their own way and this is the sort of behaviour that we are now seeing from China. This is being exacerbated by the fact that their economy is being managed in a totally artificial and unsustainable manner(Totalitarian leadership and lack of market discipline) and is on the verge of imploding. Not surprisingly the the leadership do not like the prospects of facing these inevitable consequences and are starting to thrash around like the bullies that they are.
Not a good place to have so much of our trade with. Can we afford to lose it all because we might?

"making it clear that these markets are not keen to accept China as a market economy" The problem is it is not a "market' economy, it is trying to manipulate the economies to suit it's own perceived needs. Even Chris-M above refers to the "Free Market" and what Professor Ang is referring to here is essentially a global realisation the the "Free Market" theories of Milton Friedman are seriously flawed and without some controls, will be manipulated by the big players. Another part of this picture is that, as some commentors on this site have stated, that unlimited growth cannot occur in a finite universe. This will mean that economic policies will need to adjust and adapt to a stabilising world wide economic picture. This must include acceptance of a leveling of living and economic standards. If it is anything less then wars and destabilisation can and will eventually occur, as the have-nots fight back.

Certainly one of the better posts I've read on this site.

China provides cheap stuff. It is their only play. They do it by intellectual property theft, oppression, fear, environmental destruction and dumping of inferior quality product. They are morally and ethically bankrupt, corrupt bully boys. Major global businesses have done well while maintaining plausible deniability of the methods behind the bamboo curtain. They may have produced a whole heap of stuff, but they have hardly enriched mankind. I suspect they will misjudge their own importance, overplay their hand and become simply inconvenient to deal with. Then they will return to the shuttered, reclusive backward state that they were only a generation ago. I don't think the rest of the world will miss them.

China provides cheap stuff. It is their only play.

60 years ago you could say the same about Japan - 'made in Japan' when I was a child wasn't a mark of quality and you didn't buy a Japanese car if you could afford an American or European one. A bit more recently, the same about (South) Korea.

Historically the 'cheap stuff' tends to become less and less profitable as others move in, and the country finds it necessary - as well as desirable as the middle classes aspire to better conditions - to move up. Whether China successfully moves upward on the quality scale in a similar fashion remains to be seen, but there are a number of others out there ready to take the bottom away from them (India and other parts of developing Asia).

It wouldn't surprise me at all if 20 years from now Chinese stuff was 'good' and all the cheap rubbish was being made in Vietnam and northern India (probably by Chinese owned factories...).

Too late we are a Chinese colony run through back door remote. Just imagine what will happen to ecenomy if the masters decides to punish. Just the thought sends shiver down national party bosses.

So nz will never ever do or can never do anythjng to upset the masters atleast till #jkexit.